hey guys i have a Corsair Vengeance 4 GB 1600 MHz RAM it supports Clock timing 9-9-9-24. BIOS shows correct timing but CPU_Z shows different values can any one explain me that also why it shows Max.Bandwidth (667 MHz). 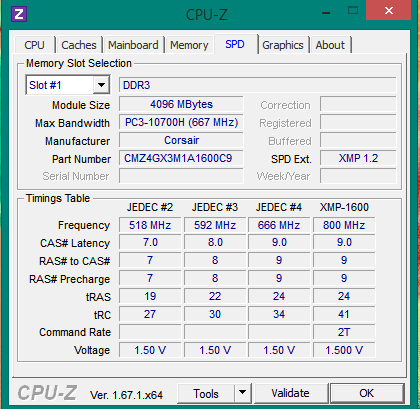 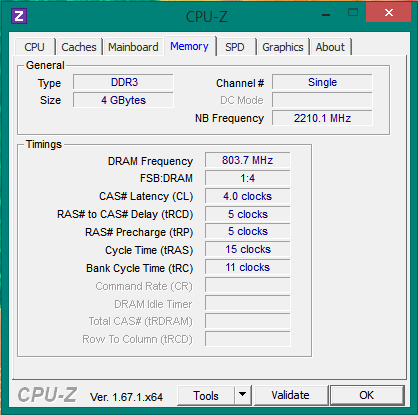 DRAM frequency is about the right speed. You have to double it for ddr3.

Those are some crazy timings. Nice and low.

It's like this cause you using single channel, but the "timing Table" shows the dual channel clocks. The "max bandwidth" shows PC3 10700 cause it's 1333mzh ram with an 1600mhz XMP profile.

i know clock speed is fine but i'm worried about Clock timing.

Usually the lower, the better for clock timings. If it is stable then that is great, too bad it is running in single channel. Did you already run it through memtest, prime95 or anything like that?

Check Part No. it clearly shows that its a 1600MHz RAM with C9 latency.

I guess I answered that kinda poorely. Max bandwidth can be ignored so long as you know what you are actually getting. Windows has its own RAM benchmark if you open up command prompt as admin, and type in "winsat mem" Gives you a rough idea of speeds.

As for the timings, is it reading at the XMP profile in bios, but CPU-Z is reporting clocks to be much lower?

yes i know that but don't you think it would lower the life span.

Any update? Curious to see if clocks can be dropped that low on a single dimm. Have never tried it out.

Latest CPU-Z version is 1.68, not sure if that is causing issues, but you can always try to update CPU-Z to see if anything changes.