The RAM kit i’m using today is quite possibly the worst thing for Ryzen, a pair of 8gb Hynix M-Die Ripjaws.
In my previous motherboard (ASRock AB350 Gaming-ITX/ac) i was able to boot and keep the system stable with the RAM frequency manually set at 2667mhz and timings set at 17-17-17-37, i never had luck with the XMP 2.0 profile of 2666mhz with 15-15-15-35 timings.
However i changed my motherboard the other day (now its a Biostar X470GT8) and since then the best frequency i can get the system to boot with is 2400mhz with the lowest stable timings being 13-13-13-33.
I tried everything to make the system boot at 2667mhz but nothing, no luck, even after i increased the voltage by a significant margin.
However i’m still puzzled, maybe i missed something, i’m not an experienced overclocker after all. And i know the motherboard is less than praised when it comes to RAM OC, but to me its still odd.
What do you guys think? Keep it like this or perhaps just change this memory kit for something nicer?

Have you flashed the bios? The 2400mhz are timings are actually faster than the 2667 timings you’re trying to run, so it’s a bit odd the new board can’t run them, let alone the advertised timings (which are also slower than your 2400mhz) config.

Yep, i did, i’m running the latest BIOS.

If you can’t get b-die at a price you think is affordable, I’d just keep it and see if 1.0.0.6 AGESA fixes it (when AMD/Biostar make it available)

Here’s an app I found on Reddit a few days ago for finding b-die ram.

A guy is selling a Corsair B-Die kit near me, if can sell these memories i already have for a decent price before he sells his, perhaps i can pick them up.
Also, the latest AGESA fix my motherboard received was Pinnacle PI 1.0.0.4c, i’ll e-mail Biostar to see if they inform me how long will it take them to release the 1.0.0.6c fix

That’s on an Asrock X470 taichi, maybe the cheaper boards have “noisier” DRAM traces on the board.

Personally i’d be inclined to change board for something decent. Sure the RAM isn’t the best for Ryzen, but i suspect you’ll keep the board longer than the RAM. So i’d go for a good board first - live with whatever RAM timings a reputable board can get and then you’re in good stead for future upgrades, not just today.

Why did you ditch the Asrock B350 out of interest?

Due to VRM problems with my previous ASRock board, yes, i’m ditching the brand and the B350 chipset for now.
I did consider the ASRock X470 Master SLI (since my choices were a bit slim, i could pretty much only get what the store had that could be exchanged for my defective B350), but i was disappointed after i saw this:

Also, from my perspective that ain’t much far from what i’m doing here, innit? Considering i have a 2666mhz and i’m running it at 2400mhz.
Just out of curiosity, can you boot it at 3000mhz?

For memory: Get B-Die. I know, it hurts a bit more. But if you want a solid and fast system it is the way to go.

I’ve noticed that on some boards it appears that changing the backplate (primarily due to switching out cooling systems) the memory sometimes trains faster or slower at boot than before.

You see the memory traces are pure RF dark magic design with a lots of things going on. And they run right under the backplate to the CPU socket.

I have this odd hypothesis that certain boards run better memory speeds without or with a different backplate for the CPU mount, potentially because the backplate somehow affects the signal quality in the memory traces.

Likely due to some RF effects. 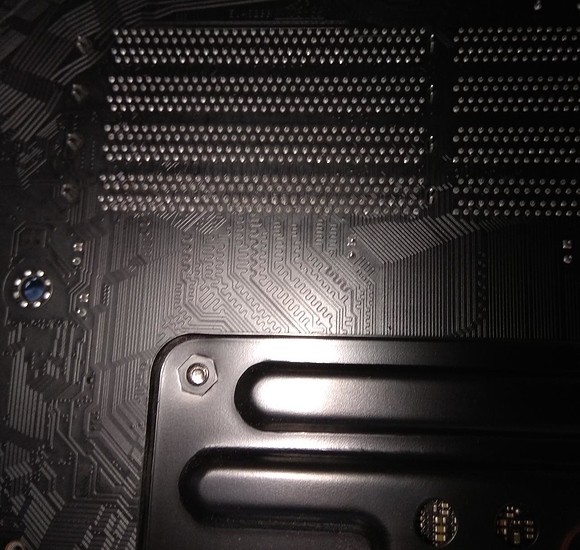 Ah yeah, but Taichis are Taichis, amazing boards, unfortunately like US$100 more around here than the lesser Biostar

Its a bit of a long shot but i wouldn’t doubt it.
I could technically test this, since i have an AM4 cooler that doesn’t requite the backplate…

Wow, that would be nuts.

Ay, that’s what i got.
Can’t complain about anything else though, CPU OC is nice, form factor is nice, well built, its just the RAM OC that is messing about (thus making the Tom’s Hardware review very accurate).

Got that e-mail back from Biostar, they said the BIOS update with 1.0.0.6c should drop in around late november/early december

Due to VRM problems with my previous ASRock board, yes, i’m ditching the brand and the B350 chipset for now.

I wouldn’t consider ditching a brand over ONE RMA to be… premature. If you do that, you’ll never run hardware from anyone. The ASrock VRM (X370/470 at least) is strong and reviews well. The BIOS is slightly poo, but…

Just out of curiosity, can you boot it at 3000mhz?

I haven’t tried. I did try 2933 with a previous BIOS/AGESA and that failed halfway through booting to Windows. I’'m dual-rank AND non b-die so i may be pushing shit up hill, my system is quite strong in firestrike vs similar systems so i’m not too fussed. I’m more concerned about it being stable than chasing an extra 100-200mhz ram frequency.

My Taichi Ultimates are running perfectly. ¯_(ツ)_/¯

So is mine (regular Taichi, ultimate not for sale locally).

edit:
I would have bought B-die, but this kit was a lot cheaper (2x16, dual-rank DDR4-3000 Trident-Z non-rgb - i forget the timings but i think it is cl15). And as above, benches well enough. I have no regrets. Maybe i’ll get some b-die or whatever when i upgrade the machine and relegate this RAM to another box at that point, but for now it is plenty fast enough.

I wouldn’t consider ditching a brand over ONE RMA to be… premature. If you do that, you’ll never run hardware from anyone. The ASrock VRM (X370/470 at least) is strong and reviews well. The BIOS is slightly poo, but…

Not because of that, they couldn’t RMA my motherboard because the model wasn’t oficially distributed and was instead imported by the store i bought it from, so RMA was through the store instead of ASRock itself. Since they didn’t have a board that matched the one i had, i could choose a different model.
Nothing against ASRock from my part, i’ve had numerous motherboards from them and sold systems with their motherboards more than 20 times and had no issues to speak off, just this one time it failed me.

Do you have the option to change “ProcODT” in the bios? Finding the island of stability with this setting is absolutely critical for any significant overclocking. It’s literally a matter of trying every setting from 43.5 to ~80 and seeing what works, and then continuing to narrow it down as you increase the clocks. My 8 sticks require a setting of 48 and anything else is unstable, but my motherboard will never choose this automatically. Your two sticks will likely be 60 or more.

Another thing is, are you adjusting the ram voltage and SOC voltage as well? What are your current settings? Adjusting RAM voltage is pretty safe, it can handle silly amounts of voltage (some skilled overclockers will go over 1.5v), all that’ll happen is it’ll become unstable. For your purposes somewhere 1.35v-1.45v should work. More voltage is not necessarily better, again it’s more an island of stability in regards to basic overclocking.

Be very careful about adjusting SOC (System On Chip) voltage, this affect the memory controller in your ryzen CPU, and too much will kill the chip. I can look up the safe max later if you like. A range of 1.0v-1.15v is perfectly safe. 1.2v can potentially be a problem if SOC “Line Calibration” is set to max level (which you should never do). There are reports of people permanently degrading their stability by a 24/7 setting of 1.25v

Consider taking a series of scrolling screenshots within the bios (most have this capability via a keyboard shortcut and saves to a usb) or with a phone. This way I can match up the names of the settings I mentioned here with your motherboards options.

Also take a picture of the label on your ram, and double check that they are in the correct slots as called for in the manual. It’s not always what you would intuitively expect.