Rackoumnt case for TR with aircooling

Hi there, I’m looking for a particular solution. I searched, but similar question was asked in '15 without final answer…

I’d want to mount a TR3990x together with couple of nVidia 3090s into a rack! Either in a case, or case that can be but on a tray, but ideally takes <6u space…

Now, one of the demands is for us to use aircooling (We had some issues with AIO’s for TR on workstations, so we do not dare to put that into rack… Noctua 14’s seem to be the only thing that’ll sufficiently cool TR under load, but it’s just a bit too tall for 4U chassis.

Our supplier suggested using Fara R1 + rack tray. I pushed back, since i have that case, but two 3 slot GPU’s will boil in there… Also no way we’re squeezing 1200w+ power supply in there…

Are there 5U cases available “from the shelf”? Also i’m from Europe… I have found some US custom casemakers, but due to company policies getting that would be PITA… Getting something from within EU is possible though.

So far best bets seem to be

Have i missed something obvious?
Thanks!

Have you looked for a mining chassis? A few companies spun them up towards the end of that craze.
Xcase made one, but it needs a riser ribbon for each GPU, only accepts ATX motherboards, and won’t take sliding rails, so would need fixed rails to rack it.

I am sure there were similar from other suppliers, but drawing a blank on mobile ddg 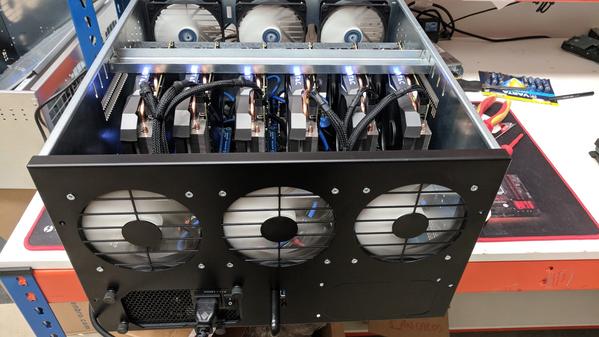 Hi, thanks for the idea.

I did check mining cases, but most of the ones i found had limited cpu cooler support…

Another note: We’d like to ensure PCIe4 connection to the GPUs, no idea if riser cables take that into consideration… We work in research and we’d like to benchmark how bandwidth affects computational performance…

Now, another option is a 4u case or similar, but we’d need a sufficient TR aircooler < ~145mm in height… Noctua 9cm doesn’t seem to support 280w TR, and i didn’t find any other…

Edit: Also regarding depth: We already have 60cm+ servers in rack, so depth isn’t a big concern…

for an air cooler, I have a gen1 TR, with one of these, in a 4U case in my second system

Having received more than 300 awards and recommendations from international hardware websites and magazines, Noctua’s NH-U9 line has become a benchmark for compact 92mm single tower coolers. The TR4-SP3 version is a tailored custom model for AMD’s...

check the spacing with the motherboard; I don’t know how high the current sockets sit.
This only gives like a few mills of clearance with the case

Also that cooler is orientated like a standard consumer desktop; Some server boards would orientate the CPU socket 90% rotated from the direction consumer boards align.

Oh, and GPU wise, I only have Nvidia Reference 9xx style cards in my case, and the power cables do press against the lids, on 4U chassis.

If you’re getting new cards, make sure the power won’t stick up higher than the case top, as some of the coolers look pretty tall

If you’re getting new cards, make sure the power won’t stick up higher than the case top, as some of the coolers look pretty tall

about NH-U9:
Thanks, this cooler seems to not be compatible (per noctua) with 3rd gen Threadripper… Only one that support those is the u14s… Which is very annoying. Also every other manufacturer has >150mm tall aircoolers for 250+watts…

I’d love to try the 9cm variant, and put some high flow blower fans to see if it can handle 3990x… Sound isn’t (too) much of an issue… Sadly i don’t have HW to test, and have to order and use what i get

It also shouldn’t be too botched, since somebody else might take over from me…

Thanks for the GPU warning. 3090’s should be from Gigabyte, not exactly sure which model, but supplier seemed to be confident they’ll fit into a 4u rack…

I was really hoping that crazy scientists here, ( silent cry for @wendell to come and save me ) managed to rack a threadripper on air by now

is this in a rack with other servers, is noise an issue?, you can go smaller by throwing some turbines at it

I know it probably won’t be helpful since you stated that buying from overseas isn’t really that easy, but if you change you mind, protocase could make you something custom to your specs and you could put whatever the heck you want in it.