So i finally decided to get a small rack for all networking junk I have. I`ll be left with 2U space. I figured out that I could use it for UPS. I havent read any reviews and know nothing about the subject.I need something that would support minimum 6 devices (preferably 8 ) with as much juice as possible .Im looking for price to performance ratio so dont mind buying two 1U units. I need something I could get in UK or EU at least.I dont have a strict budget limit and I dont mind buying more expensive stuff if its worth the money but dont want to spend more on it than my networking gear is worth :) Are there some brands that should be avoided?.Is it better to pay more etc. Any opinion,recommendation and advice is welcome :)

Be very very careful with the depth. All rack mount UPS I found so far are far to deep for a "network" rack.. which usually isn't full depth.

How much VA do you need? VA proximately equals with the Ws your stuff is drawing.

I use APC SmartUPS and love them. 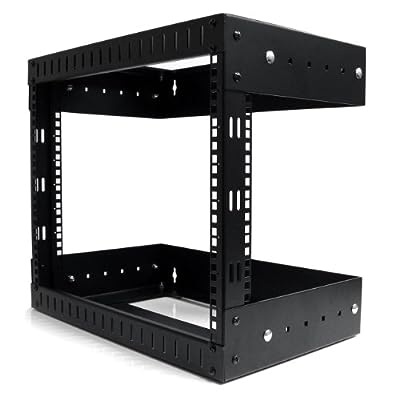 Mount your network and telecommunications equipment with the convenience of adjustable depth - The RK812WALLOA 8U Open Frame Wall Mount Equipment Rack with Adjustable Depth is a high-quality, sturdy r ...

It is adjustable,20 inch depth is max and it wont be mounted on a wall. I would like as much power and connectivity as possible and stay below 600 GBP. If not Ill go for standalone units but the less space used the better.
I`ll use posts similar to front ones at the back to make it rigid and ,Ill use it on a platform acting like a trolley.

But anyway, there's plenty of APC units out there.
Look at your equipment and see how much their typical power draw is.
Think about will you be doing any upgrades within a few years that would increase the power draw of your rack.
If not, well, there you go. There's your max power draw. Go and look at UPS units.

Here's APC's UPS selector tool. Should be quite handy for you.
http://www.apc.com/tools/ups_selector/index.cfm

Those Smart UPS are great pieces. I have the 2200VA unit powering my whole workspace. It keeps my desktop, 2 monitors, 2 laptops, 1 switch, 1 router, 5 raspberry pi 2, 1 Accesspoint, alive for at least 20minute =D

If the desktop and the laptops are not running, its almost a whole day of runtime ^^

One thing, thats also great about these UPS, which must be considered under low load scenarios.. they do not switch off if the power draw is to low.

tl;tr: I highly recommend the APC SmartUPS
I have a 700VA UPS I once bought at "Media Markt" which turns off if the load is below 60W..

Okies , I have forgotten that batteries weight a ton so ill pick up standalone units and get kvm/ more switches for my junk so i can use both ends of the rack once i get second pair of mounting brackets/pillars /whatever its called. Okies ,its seems that rackmounted one is not the best idea .My equipment is fresh and power efficient.I am getting some 1U cases for my router and microserver, so it will be all in one place. Thanks you all for the advice.