The first reviews have dropped and it seems that we have a few interesting points to look at, even for the "rebrands".

The R9 390x managed to cut down on power consumption, even though we have higher clocked memory and higher stock clocks. 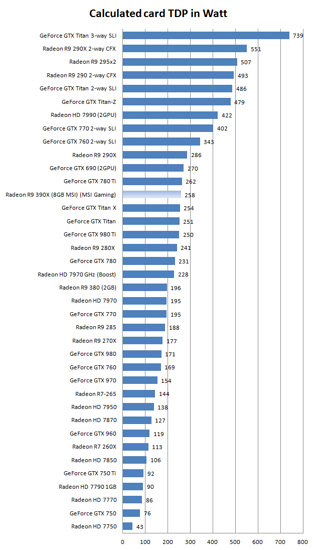 (source: Guru3d.com http://www.guru3d.com/articles_pages/msi_radeon_r9_390x_gaming_8g_oc_review,1.html)
This specific model runs at 1100MHz, 100MHz faster than the stock R9 290x. It has more memory and the memory is clocked higher as well, at an effective 6000MHz compared to the 5000MHz on the 290x. Yet power consumption is down by 25+W somehow. edit: These results don't seem to add up with the results form hardwarecanucks. They reviewed the TriX R9 390x and measured the system power consumption, and from their results the 390x consumes 5% more power, but is also 10-20% faster than a 290x. Which would, again, speak for some improvements when it comes to efficiency, but not quite the outstanding results that guru3d.com has published.
Performance is good across the board, in vendor neutral titles it's as fast as a 980, in Nvidia optimized titles it's a bit slower, in AMD optimized titles it's a bit faster. That is at 1440p. At 1080p the 980 gains a few %, at 4k and higher the 390x gains a few %. Doesn't really change the overall picture though.
Temps and noise seem very much under control for this specific model, and since we have nice coolers from the get-go I expect them to be good across the board. I'm still interested in the new stock cooler but I couldn't find any reviews for it so far.
Overclocking will, of course, also depend on your luck and the specific model you have, but it seems that another 100MHz on top of most factory OCed cards is possible. Giving the card another tiny bump of a few %. So overall it competes with a 980 and even beats it for 4k UHD gaming across most titles, at its promised pricepoint and with the slightly reduced power conumption it seems like a good deal to me, and 2 of them (or 2 R9 390s) would be ideal for a "cheapo" 4k setup.

R9 380, a huge disappointment in my opinion. Power consumption is nice and low at <200W, but it's effectively an R9 285. And that means that it's slower than a 280x in many cases. At least it is available in 4GB models from the start, and it is a decent midrange card, but I'd like to see a 380x honestly. I want to see what a larger Tonga chip could do.

R9 370, again, decent for the money but nothing spectacular. Basically an R9 270 performance-wise.

No Fury, FuryX or Fury Nano reviews as of now, we only have cherry-picked benchmarks from AMD to work with because someone broke the NDA on the reviewers guide. But they're supposed to be reviewed and "available" next week.

One thing to keep in mind with the R9 390 and 390x cards is that 4K benchmarks might arguably be a better metric than 1080p.

I mean if you think about it, ya most people game on 1080p, but really, the thing we're concerned with here is longevity, any high end hard can play modern games fine at 1080p, but what about a few years down the road ? Presumably the 390 will perform closer to the 980 when higher resolution textures are coming around, and $330 vs $500 is a big price difference.

But then again who knows, maybe you'll end upgrading your card before that point anyway.

A totally valid point IMO. Not only the overall better performance at higher resolutions, but also the 8GB of memory might (at some point) come in handy. An R9 390(x) right now for 1080p or 1440p is a great solution, and if someone wants to upgrade they can add a second card later down the line and be "fine" for 4k UHD gaming. I'm not trying to bring up "future proofing" here, because that's inherently flawed, but it does seem like being geared towards higher resolutions might come in handy at some point.

They should have made 4GB the standard for the R9 380, to have it have a noticeable difference between the Tonga predecessor. Having a "base clock" of 970mhz, with many vendors offering 990-1000mhz, puts it at pretty close to R9 280X level of performance. Then, on a single card, 4GB might be superfluous.

Right now, I am testing out the Gigabyte's R9 285 (running at 973mhz). My previous GPU was an XFX R9 280X Black Edition, which has a factory overclock of 1080mhz. The practical difference between the two is pretty slim; on my preferred settings for competitive play online (which is pretty much Ultra, without anti-aliasing) they are pretty damn close, and rarely go below 60 FPS. For single player experiences where one likes to crank up the settings to maximum, like Metro 2033 redux or Tomb Raider, there can be difference of almost 10 FPS, and the minimum FPS will go down into the 30s. So nothing terrible.

Anyway, to tie up this Tonga tangent, the big advantage (for gamers) of the R9 285 was the inclusion of the AMD True Audio, VSR, Freesync support. Beyond that, it has the updated power scaling and 4k decoding, for those that care about that sort of thing. It was just a shame that the initial Tonga launch was rather lack-luster - all the vendor variants were rather cookie-cutter, and overclocking capabilities of the card were rather limited.

EDIT - Ah, I almost forgot. Anyway, the 300-series is probably the higher binned products of the matured design, which is probably why they are not only higher-clocked, but also can (emphasis: can) consume less power. I don't mind the rebrand; it's a good way to phase out the old and establish a new standard.

Tonga was a pretty good overclocker. i'm curious if the 380 cards have a much terrible overclocking potential now, or has it gotten better. the 285 did beat the 960 and the 280. but never got close to the 280x. i wonder if the card pushed to holy hell will change that.

i say the power consumption was cut down by having better cooling ~ and good quality of memory chips - while 290x was abyss in those.

Erm. Cooling a card better doesn't make it use less power... if that's what you meant.

if you are using slower rpm /more efficient fans and better/bigger copper/alloy radiators you just might.
its few watts but still. (its running cooler so less power is required to cool it down)

i bet reference 290x fan was using about 15-20watts on full throttle. (but might have been using 8watts, not sure what to make of it.)

Erm, a 120mm fan running at 2000 RPM doesn't even use 1W for the most part. You do not save any significant amount of energy by changing up fans. The only real difference I could think of would be the fact that silicium can be an NTC (depending on the doping), meaning that with higher temperatures the resistance goes down, which would result in a higher current with a lower voltage (which may impact the efficiency depending on the design) or a higher current with the same voltage (if the voltage can't change because of the design, resulting in effectively wasted power) in basic electronics. I'm not sure how that translates into incredibly complex microchips though. It would be better to ask someone who specializes in that field.