Hey guys just really quick wanted to get some opinions on what to do with my R5. I am wanting to do the same thing logan did to midi-gate the noise level of my PC and mount the h110i GTX on the front of the R5 instead of the top. Problem im running into is i also have a 980 ti Hybrid that is going to be mounted on the back. Was wondering if you guys could help out with the best cooling config with the two closed loop systems. Also have two extra 140mm I could throw on the h110 for push/ pull.

R5 is not really the best case for this...
You can easily relocate the bottom HDD cage a bit deeper inside the case, to open space for the CPU AIO... Then you can place the GPU rad in the back... The issue is, that at the end you will still have 2 intakes, 1 exhaust, all 3 of them restricted like hell... The mobo will have no cooling, the Videocard itself will have no cooling, and all airflow inside the case will run warm air...
I really hate the design of R5 when it comes to cooling. The main issue is: you remove just one panel from the roof of the case, and your silence and dust isolation is gone...
What you can also do, is remove the bottom cage, put the H100i on the bottom, use the 2 extra 140mm fans in the front as intakes and place the GPU rad in the back as exhaust. 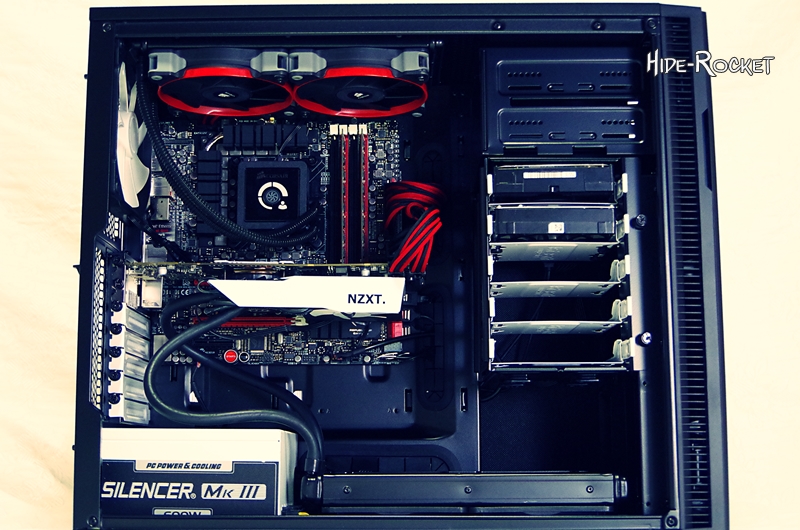 This way you will have 2 fans still pushing fresh cold air in...
My advise is to get the GPU rad in push-pull for the simple reason of taking more air out of the case. And whatever you do, don't remove the top panel. You will loose both silence and dust protection.

I see what what your saying. Still waiting on the GPU and h110 to get here. Idk if the h110 will fit on the bottom with what I've got. Haven't measured it yet. I just found another 140 from my r4. Maybe push pull both coolers and throw an intake on the bottom? From what I saw on logans was he just had the h110 on the front and I'm assuming an exhaust on the rear. Not sure how he is managing that lol.

Idk if the h110 will fit on the bottom

Bottom: 2 – 120/140 mm fan (not included)
It will fit.
I am a bit of airflow cooling fanatic. I have Arc Midi R2 with 5 case fans, 11 in total in the system.
However, placing the 110 on the bottom and fans on the front is the only way i see, to keep one hard drive cage on.
EDIT:
Use of radiators in the bottom position limits the PSU length to 165 mm
And it states only 240mm rads. It may not fit in the bottom. However, i clearly see the holes...

I will have to give it a try. Just worried about my power cables getting in the way. And my bad i forgot to mention i using only SSD's so i wont have any hard drive cages in there.