For a while now, I’m considering purchasing a m.2 NVME drive and there are a few things that bug my concerning theses drives. So, here we go:

Any help would be (as usual) appreciated

ive played with m.2 ribbion cables to relocate the drives for cooling reasons ,behind the mobo sandwiched between the mobo tray. they dont seem to lose any speed over this mounting the drive is more a issue.

as for true numbers on speed i dont have anything to compare to my drive so 1.2gb/s rw on my drive wd black 256gb nvme drive b4 prices fell

For number one. I know that intel, with there u.2 drives, have traditional sized drives and use cables to connect to their socket. https://en.m.wikipedia.org/wiki/U.2

And there are nvme extension cables. I don’t know if they degrade performance tho. M.2 drives are connected to the mobo to open up case space for better cooling, and to allow for smaller and thinner, yet upgradable, laptops/all in ones.

Why are those drives always mounted directly on the mainboard?

They are basically out of the way. I don’t think M.2 was necessarily designed with desktops in mind, I feel like they were more designed for mobile devices and servers where space can be at a premium.

Or would the cables degrade the performance?

Not really, U.2 basically does the same thing as NVMe M.2 over a cable.

So, from a heat perspective the best mounting option would be the one at the bottom

Depends. The memory chips on SSDs actually hold up to heat pretty well, so they can be run warm without a problem.

20GB/s should be more than enough considering most drives are rated at around 3-3.5GB/s

Be careful of Gb vs. GB. The slots are rated in Gigabits whereas the drives are rated as gigabytes (actually megabytes, but for this purpose GB). At 8 bits per byte, the faster slot is more like 4 GB/s, which a good modern NVMe SSD can saturate. The Samsung 970 Pro can hit 3.5 GB/s sequential.

Thanks for all the input

@THEkitchenSINK might pick up one of those and put the drive somewhere else. Unfortunately, 20cm seem a bit on the shorter side of things.

@Goalkeeper Haven’t really heard of u.2 drives, thanks

@w.meri I guess you’re right, they weren’t meant for desktop computers. But Samsung & Co do sell their drives for desktop use as well as mainboard manufacturers like ASRock. So, a different approach wouldn’t be that far fetched.

When I said heat perspective I was talking about my CPU/GPU which would be heated up by the m.2 drive.

I could have sworn I read GB/s in the manual of my board. But apparently, I was wrong.

Damn, so the only viable slot would be the one between CPU and GPU.

M.2 drives don’t get super hot. Most power they’ll use is 8-10W, and only for very short periods. Most I’ve seen sit at about 5W on sustained loads, which won’t make a perceivable difference to your CPU/GPU temps, if you’ve got decent airflow. If you’re not doing any long writes, they hardly use any power.

Like @w.meri said, the NAND chips hold up well with heat. Putting a heatsink on the controller isn’t a bad idea.

Why are those drives always mounted directly on the mainboard?

Simple rule - high speed need short distances. That’s why the CPU, the ram, the GPU are all on the board itself. You seen PCIe4 thing requiring redesigning the motherboards so the signal can reach the far end of the motherboard.
SATA drives have 550MB read and write… NVMe drives on PCIe3 have 3,5 GB read… PCIe4 NVMe have 5GB read… You need a hell of a lot of repeater hardware to make the signal reach the CPU if you have a cable and connector on the far side of the board…

Often mainboards have two (or more) mounting options for m.2 drives which differer in the speed they provide.

Ryzen provides 4PCIe lanes for M.2 drive, usually the one nearest to the CPU. MSI are shaking things up by moving the CPU direct M.2 drive away from the GPU, therefore away from the heat of the GPU. But in general one M.2 is directly connected to the CPU and the others are going through the chipset or are sharing bandwidth with other slots.

Aren’t M.2 drives basically just a different form factor to the HHHL, and having a separate port means a x16 slot doesn’t get wasted?

They could have continued making them in HHHL format (I’m thinking like the Revo drives or Intel 720’s), but the laptop style sticks work better, saving space?

Not exactly. M.2 drives can be either PCIe based or SATA based, which is how we can have drives like the WD SN750 and the WD Green, the former is blazing fast and the latter just normal SATA SSD speeds. Some M.2 storage slots (usually secondary or tertiary slots) won’t even be wired for PCIe, they’ll be SATA only.

And that’s not including that M.2 can carry I2C, UART, PCM, USB, DP, and/or audio depending on the keying.

20cm seem a bit on the shorter side of things

i have only seen them once stacked on each other to extend seems ghetto and no idea on data at that point. i bet there are longer cables if you can find shielded ones, i see some on aliexpress but i dont trust the nvme support on those

a m.2 to u.2 to m.2 adapter does exist i have seen it places where it allows you to place the m.2 drive anywhere basically. 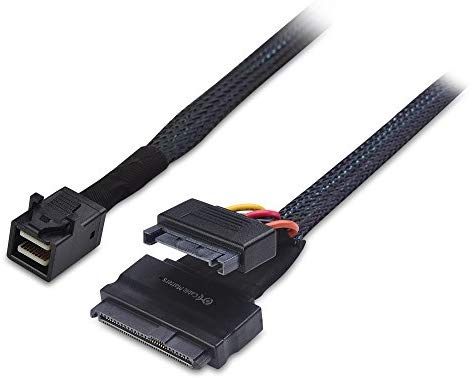 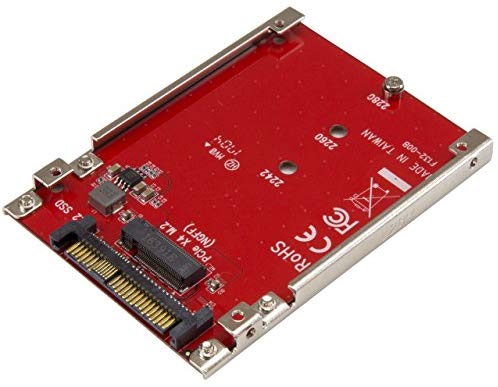 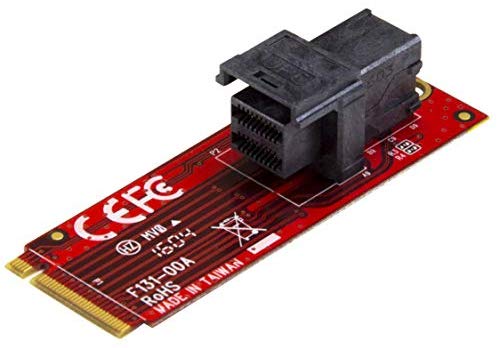 using these together to place a nvme drive elsewhere

Took a bit to find one . american review is on the 10cm cable. They are willing to make longer if you contact the seller.