The multi GPU sector out there is growing and with it it brings it's own set of challenges. I have been a graphic enthusiast since discreet graphic accelerators first started showing up in the marketplace in earnest in the early 90's.

Starting in 2007 when Crysis had people building machines dedicated to the ability to run the most graphically advanced game to date, I have built myself a quad GPU machine every 9-12 months. With the challenges that came with the early days of multi-GPU computing and gaming, I have watched and experienced the challenges as the use of tandem graphics have improved and come into their own.

From the problems of heat dissipation to poor scaling have been overcome, multi GPU is now the most popular enthusiast feature as the number of pixels that needs to be processed is rapidly growing. This blog is dedicated to helping and discussing the practice and challenge of getting the most from multiple cards work in tandem.

The First Quadfire inspired by the Crysis phenomenon. The machine was actually built as a challenge when I opened my mouth and said I could build a machine that would run rings around the current 'Crysis' machine that was being offered for $700 and would run Crysis on 'Medium settings.

I said I could build a machine that would run it at full setting for the same price. 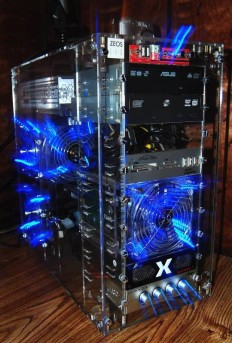 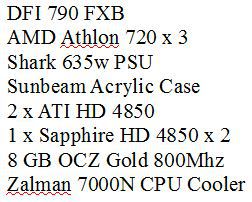 This was the start of my Custom built gaming machines business that took off for people who needed high performance, however needed the  challenges of Crossfire solved in order for it to be reliable and viable. Keeping in mind that the number of crossfire users out there in 2007 was somewhere in the area of .002%. Thus I made multi GPU graphics my specialty while keeping the cost from being prohibitive.

I'm removing this in 24 hours. Not needed for the blog section.

working on the completion of the blog to help those understand multi-GPU issues and the evolution of having multiple GPU's working in tandem. As well as driver support and overclocking.

I would love to see more posted in this blog. I am intrigued. I love older PC hardware, and reading about it.