Hello Qain, I just wanted to post this because I am interested, and have thought about posting it for a while. I've noticed you wearing NIN merch pretty often, and it's obvious you're a NIN fan. I am as well, and was curious what your favorite NIN album is, and how you would rank NIN's albums?

My favorite NIN album is without a doubt, The Downward Spiral. This album is absolutely fucking amazing. Seriously fucking phenomenal. Trent Reznor has put out some really great albums, but this is the pinnacle imo, and it's so fucking deep and creative. The pig themes, the seamless interconnecting rhythms and horror movie sample loops, the textures, the intense feeling of mechanical humanness, it's just absolutely fucking phenomenal. The Downard Spiral is to me, the epitome of the idea of Nine Inch Nails - the blurred lines between humanity and electronics/mechanics. I read an interview with Trent Reznor a long long time ago and he talked about when he first created NIN, like where he got the idea, was when he was a kid at an arcade, the enclosure door on an arcade machine was open, and he looked inside and saw all the circuitry. Listening to The Downward Spiral is almost like peering inside at the circuitry of some fucked up android that thinks it's a human or something. It's absolutely incredible and completely unmatched by any other album imo.

This thread is not about myself, but I just wanted to post my favorite NIN album, and I wanted to try to put the rest of NIN's discography into a tiered ranking system. I can't rank each one individually in terms of my preferences, but I think I can do tiers. I'm only considering original NIN studio releases, not remixes or soundtracks or anything like that.

ETA: This thread is incomplete without music.

I've always wondered why the woman came up to and spoke with Trent in the middle of this and what she said. An unsolved mystery.

In my opinion, "Pretty Hate Machine" was the best album. Second being, the Downward Spiral, then Broken, then "With Teeth", then "Year Zero". in that order.

The Fragile has to fit in there somewhere though!

Honestly i didn't like "The Fragile" all that much, i only really liked "Starfuckers Inc." and "Somewhat Damaged" tracks off the album. 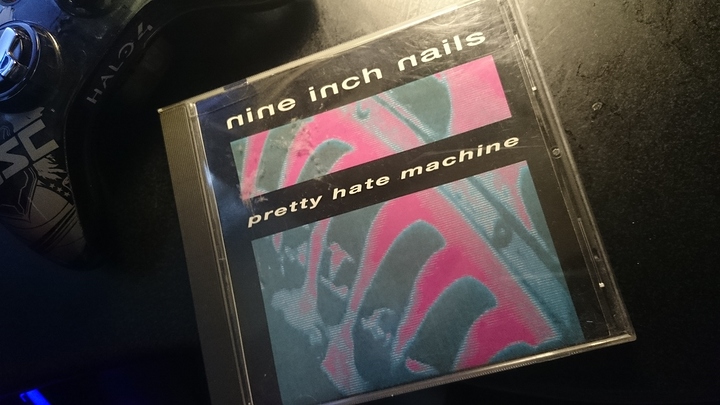 Sin is my favourite NIN song.

NIN Mega fan here. Favorite Album is hands down 'The Fragile'. It's so organic and electronic at the same time. It's so angry, haunting, painful, and yet inspiring. By far the most dynamic of all the Halos.

hell yea
the blue ray for beside you in time was pretty sweet,
they mastered the audio in such a high quality

lol I asked for CD cause my Dad wouldn't buy me a vinyl player. he bought the vinyl and kept it for himself :(

I actually don't own a Blu-Ray Player. that blue light you see in the photo is just the Blue light from my Corsair K70 lol

Not to go on a Tangent but these are the only albums i own.
i stopped buying physical copies of CDs. i only bought them to get the bonus tracks cause i couldn't find them. with the exception of the "Bring me the Horizon" that was just a memento of going to Vans Warp tour for the first time. 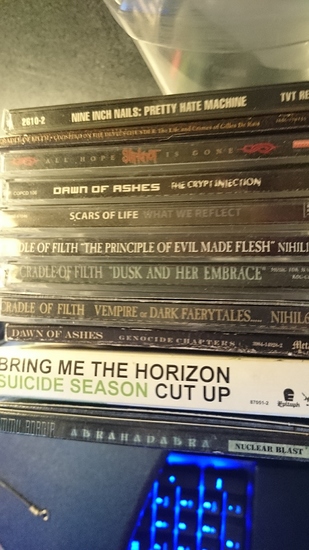