I am trying to figure out how to power an Intel S2600IP mother board from a standard ATX power supply. The problem is that the MOBO requires 1x24pin, 1x4pin, and the dual CPUs require 1x8pin each. My Power supply (EVGA superNOVA G3 1000w) only has a 24pin and 2 CPU power lines.

The question is where can I get the remaining 4 pin power required for the MOBO?

I have heard that it Molex conversions are unreliable, but that perhaps a PCIe cable could be repinned to work…

I would rewire a plug manually.

Not sure you need the 4 pin. It looks to be an auxiliary in case of needing more power for the PCIE lanes, and unless your chucking in a stack of GPUS, you probably won’t need it. Could be wrong, but that’s what it looks like to me.

The user manual calls it Main power 4pin connector on MOBO…Which plug would you rewire? I have heard of using a PCIe plug and repinning it, but not sure if that works or not.

I’ve saved old PSU connectors (20/24 pin, others) specifically for making my own connectors like that. Your 1000 watt PSU shouldn’t have any power issues, so you just need to feed power to the motherboard.

I’m a heathen, so I just cut and splice wires together, and started soldering them more recently to make them a little less horrible, but it’s easy and it works. After seeing the expense and hearing the horror stories of people trying to re-pin things, I wouldn’t even consider that method unless all I had was pins and only enough connectors to make it work. This is simply a matter of choice and IDGAF about looks.

I’m pretty sure those 8 pin EPS connectors are just 12V and ground, all connected to the same spot on the motherboard. They go a bit overkill on the pins so PSU manufacturers can use a single gauge wire, in enough quantity to supply sufficient juice after voltage drop. That makes tons of sense for people mass producing PSU’s, but not really a requirement of someone doing a one-off DIY job.

I’d imagine a single 10 gauge wire from the PSU to the connector, and reusing a PCI-E connector, wired appropriately, would have no problem supplying power. I use this as a single example, a number of wires, wiring methods, and connectors could be made to work. I have a single 12V+ and ground going to a chopped PCI-E connector for my motherboard 4 pin power. I’m using a Pico PSU that doesn’t have the 4 pin power, and other than making sure it is wired right (I think the + and - are in reversed positions on the CPU power vs GPU power) it has worked fine for years.

I think this is what you need, its within the per pin connector and cable rating, however a 6pin is only offically 75w because the 2nd of the three 12v lines is optional, the pcie 8pin connector allows twice the current (150w) only on the same three 12v pins (it has an extra 2 grounds, for a total of 5). Thus for your 135w TDP CPU your only drawing 3.75amps per pin, while the connector and cable is rated for 4.16amps when used in a normal 6+2 to provide PCIe cards power, thus giving you 111% the rating you need even under conservative standards: 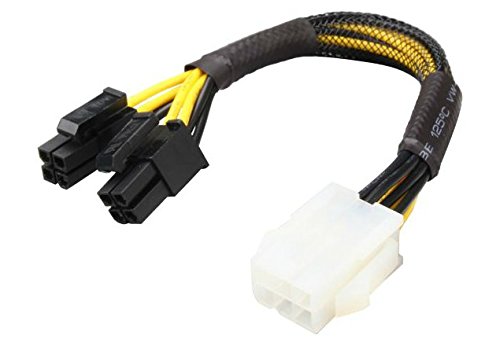 You can also buy sata or molex peripheral connector to molex 4 pin ATX +12 volt power cable pretty easy on amazon, ebay or the like. Note that while most boards (but not all) will run with only a single 4 pin in the 4+4 slot, the 4+4 is NOT the same as the more common PCI Express 8pin, nor can you use two 4 pin connectors in a 4+4 slot, the connector is mirrored.

Alternately you can always use a duel power supply adapter, which may be a good idea if your 3v3 or 5v load is too high for your one PSU (modern computers draw nearly all current on 12v rails, older computers used mostly 3v3 and or 5v, so a modern PSU may struggle to run an older system and vice versa. However given the S2600IP is 2012, it should be considered modern in this regard.

Here is the best description of all the power connectors I’ve found:
http://www.playtool.com/pages/psuconnectors/connectors.html

I’d really consider just trying to power the board without anything in the 4 pin before you go rewiring things to work. There’s a damn good chance it’s just supplementary power, and might not be necessary.

I would advise against it, server boards can be very picky and you don’t want to smoke anything.

That said your probably right its just extra power for things like PCIe devices, I just wouldn’t want to find out that current will make its way through a path it shouldn’t if you leave it off, however I really would feel comfortable using a boring old dodgy molex peripheral connector or even sata adapter to fill this role if your needing your PSU’s 4+4pin EPS somewhere else.

Wait so let me get this straight you’re afraid not powering it will damage it but AOK with using a potentially poorly made and improperly speced MOLEX or SATA connector?

wut. Am I missing something here?

Nothing will happen to it if he attempts to run it without the connector installed. Worst case it doesn’t turn on. Nothing will be fried

Worst case is not nothing happening, worst case is you have current somewhere your not supposed too since it was designed to have basically 12v power connected on both sides, thus not be carrying any real current themselves. On the other hand the only thing thats wrong with using a molex adapter is it can overheat if your drawing to much current, since it has only one 12v cable&pin instead of 2 like the 4pin 12v auxiliary connector (the pins and wire gauge are the same 18 awg and molex 8 amp).

If the board would run fine without the 4pin 12v auxiliary because its connected to the duel 8 pin EPS with a decently thick PCB trace then it’ll be no worse off (indeed its just one more 12v and ground onto the existing 8). If there is a connection trace but its too small, the extra line may prevent damage. If there is no connecting trace and so the board would simply not run without the 4pin 12v auxiliary then its probably fine with the rated 96w of the molex peripheral connector, but if its overloading it the only issue will be cable heating (and safely removed from the motherboard), so its pretty easy to test\tell.

As for quality, its a standard design pin connector with short length of cable, not a swichmode supply. For it to be an issue it’ll visibly be horrible or not fit right.

Worst case is not nothing happening, worst case is you have current somewhere your not supposed too since it was designed to have basically 12v power connected on both sides, thus not be carrying any real current themselves. On the other hand the only thing thats wrong with using a molex adapter is it can overheat if your drawing to much current, since it has only one 12v cable&pin instead of 2 like the 4pin 12v auxiliary connector (the pins and wire gauge are the same 18 awg and molex 8 amp).

No. You’re talking out of your ass.

The server board includes white 2x2-pin power connectors that provide supplemental power to high power PCIe x16 add-in cards (video or GPGPU) that have power requirements that exceed the maximum power supplied by the riser card.

Aka if you have a riser card with a gpu, that plug PROVIDES power from the motherboard to a riser card. You DO NOT want to plug any power cables into that plug from the powersupply, since THAT would kill the board.

Don’t plug anything into that plug, for your use case @OP it doesn’t matter at all.

THANK YOU CAVEMAN!! I have never seen a plug on a MOBO that provided power. It is indeed labeled OPT_12V_PWR… 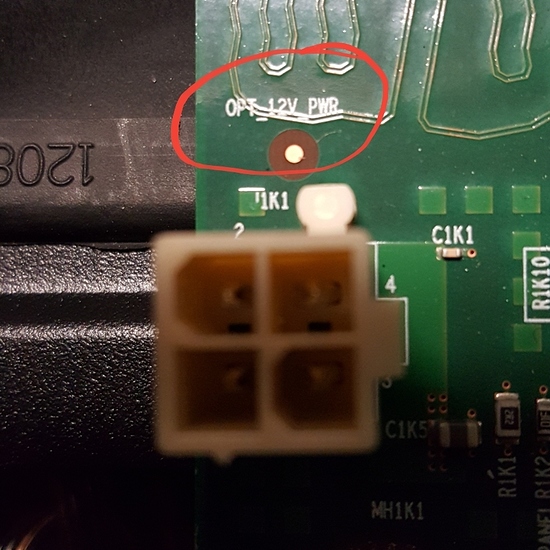 I have never seen a plug on a MOBO that provided power. It is indeed labeled OPT_12V_PWR…

I’ve seen custom form factor server boards have plugs like this before, but never a standard formfactor board. I guess intel wanted to make that possible since they did offer their server boards in pre-done servers, and some of those servers may have used riser cards. Interesting stuff, just glad we got that sorted

Gratz on finding the manual, it is good to have the manufacturers explaination.

However I really don’t appreciate being told “I’m talking out my ass” when, like you I have never seen this connector used as a power provider outside of custom boards (and only then in a very limited subset of years between PC’s starting to draw most power from the 12v instead of 3v3/5v lines and 4pin 12v power plugs where standard in power supplies). You’d also come to the exact same logical assumption it was a power input when you made your first post, and when I did so I linked the source that explained the pin out and common usage of such a connector.

So when people are donating time to try and help without compensation, have just as much experience as you do, linked there sources AND even reached the same conclusion as you originally did it seems rather off to insult them.