Figured i should post my temporary setup over here, can’t wait to finish my new setup so i can move everything away from here to restore this place (should explain the holes on the wall). 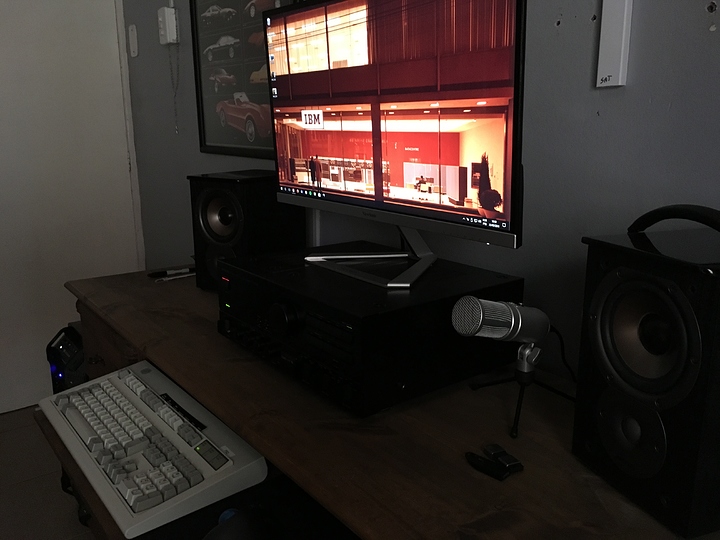 As well as the pièce de résistance, my pristine JDM Onkyo Integra A-817XD integrated amp, fed from the PC via a Creative X-Fi Go! Pro DAC: 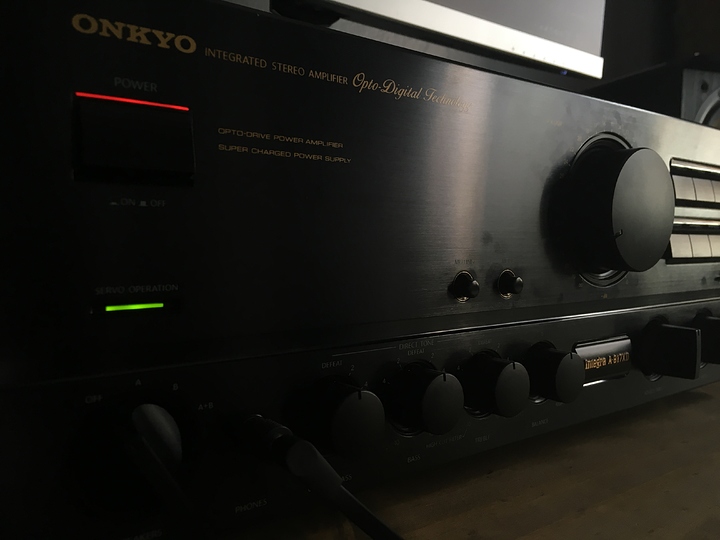 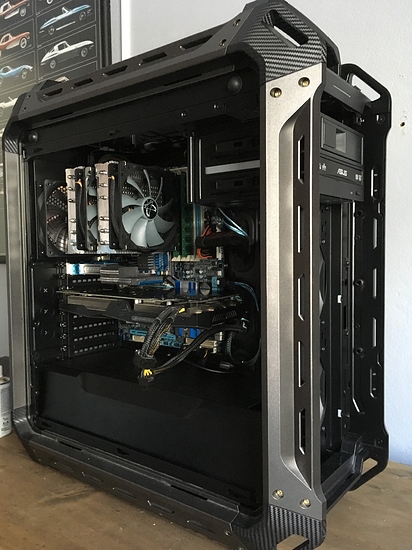 Hi. I really love good battlestation thread, so I wanted to share my office space with you guys.

The office space with all the desks

The big man himself, CEO and owner. He just went on vacation so his desk is way cleaner then usually. 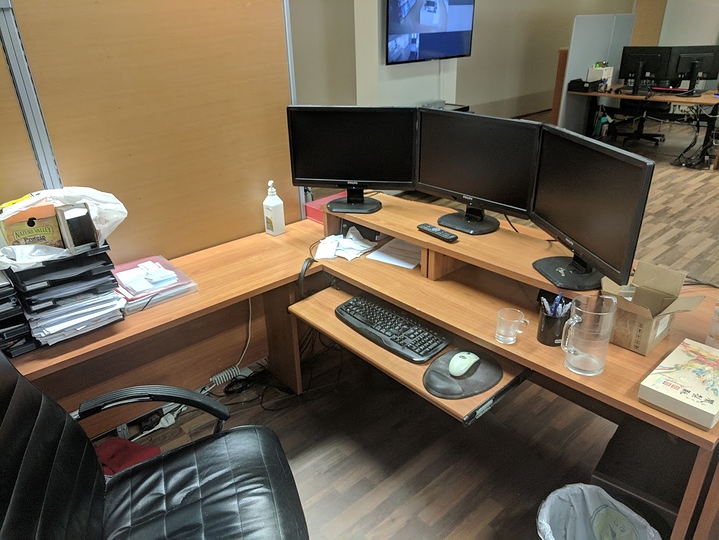 The programmer ( ME ). Minor clutter but I’m lazy 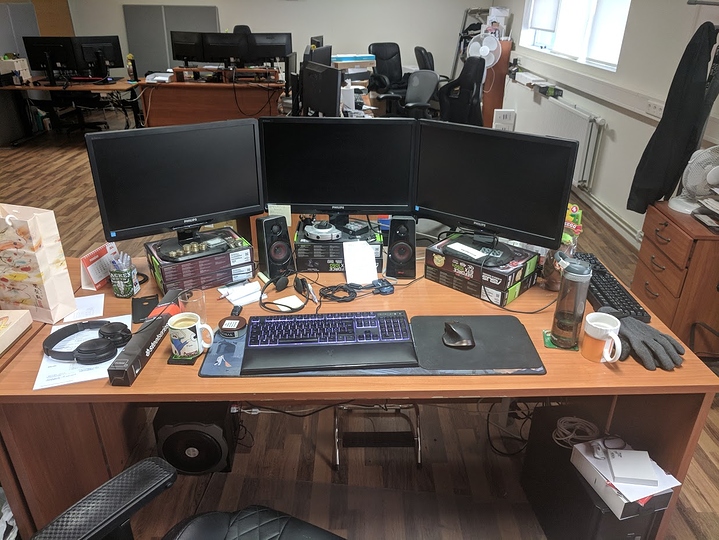 Product manager 1, He’s the oldest in the space. 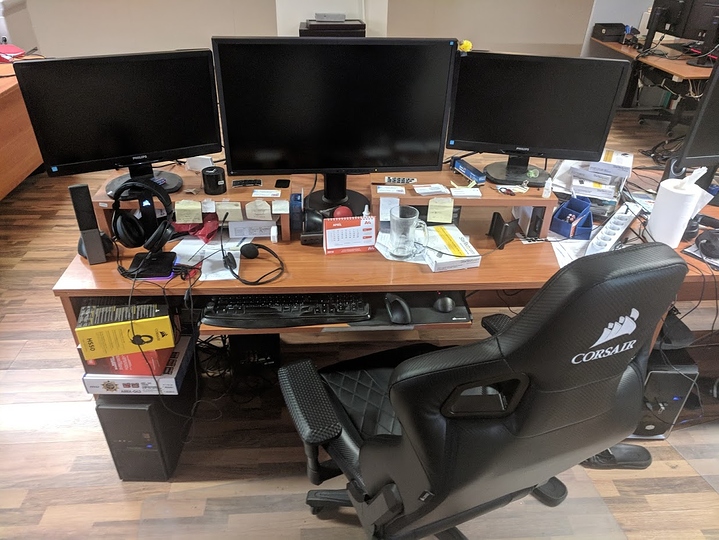 Head of purchasing. Second in command overall in this space. 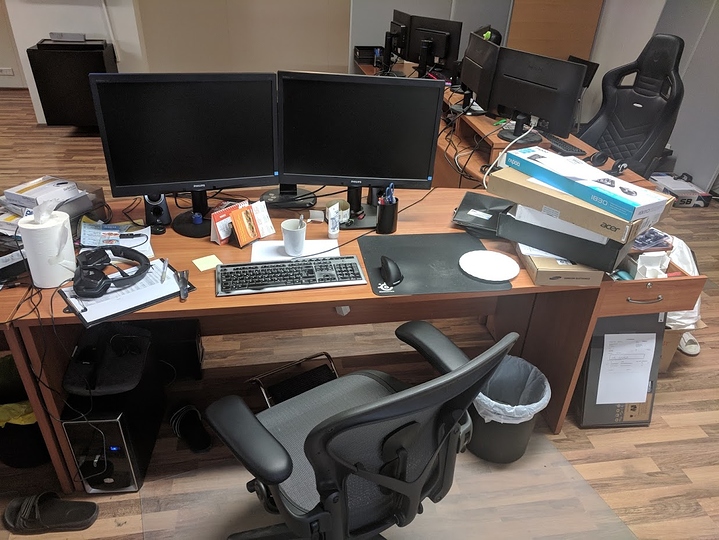 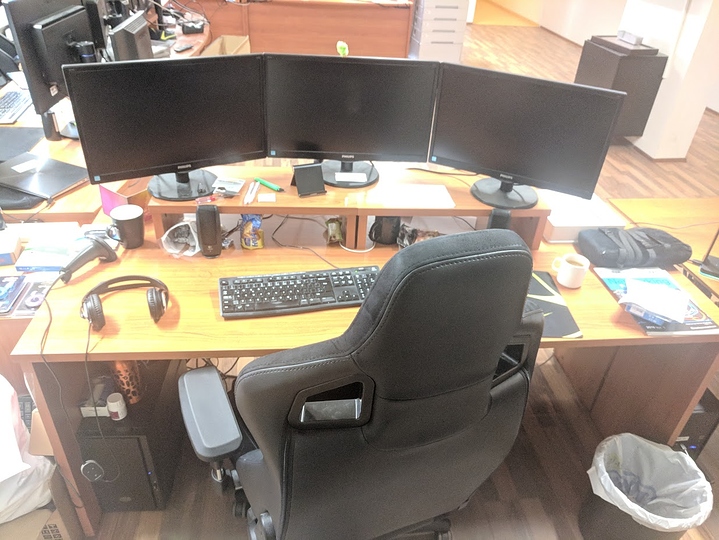 Product manger 3. Also on vacation. Newest in the office. 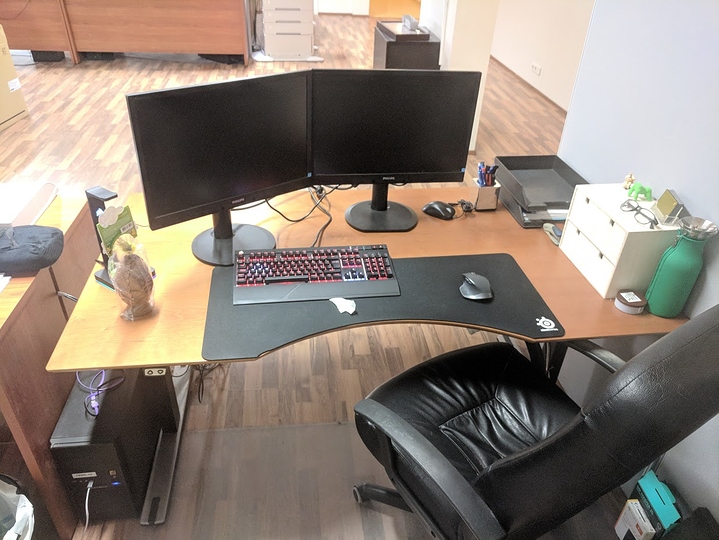 I’ve merged your thread into here, since it’s more suitable into this existing thread.

The programmer ( ME ). Minor clutter but I’m lazy

I love that your monitor stands are hardware boxes

Mad jealous. I used stacks of printer paper for a long time until I got a standing desk lol.

Just the five of you?

What headphones to you use, I recognize the Corsair Void and I love the shape of them but the sound leaves me wanting more for music.

So I done some cleaning couple of days ago, from left 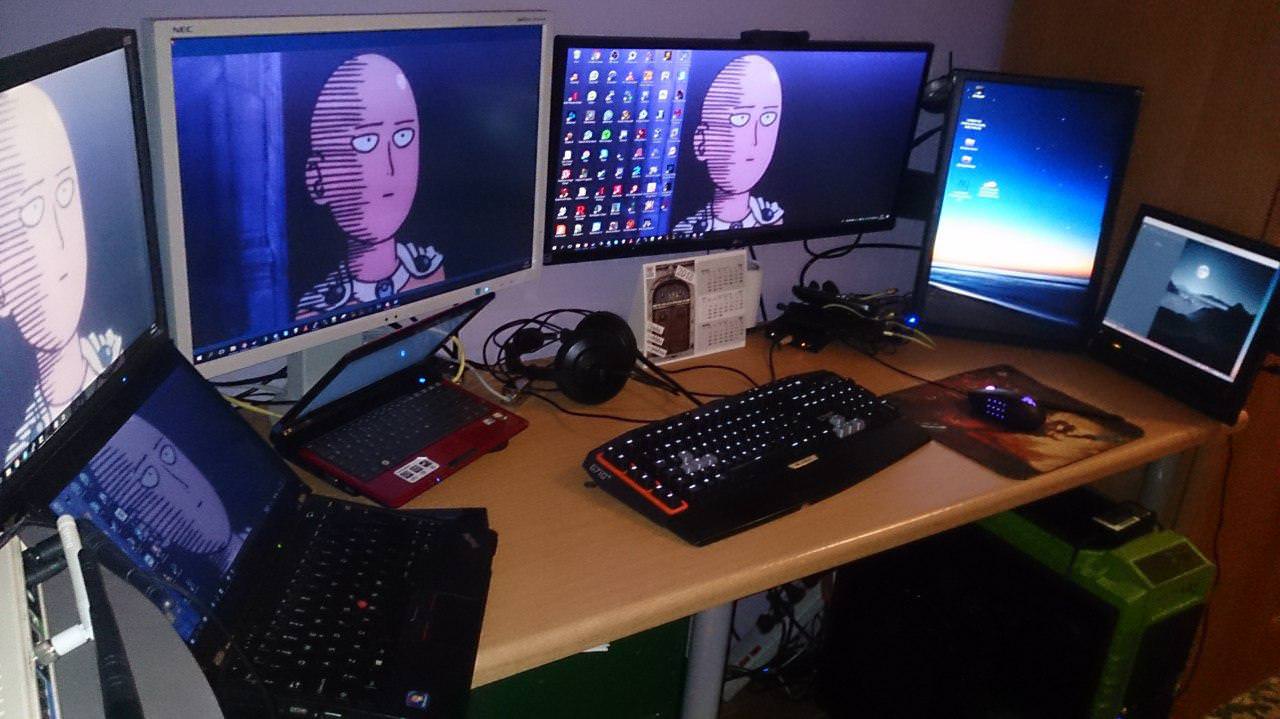 x230 i7-3520m 12GB RAM 128SSD, my mobile workstation but in home it’s my mostly putty/coding station with 17" Eizo L557 iirc
m2010 an oldie atom and 2GB of 160GB HDD serving as an server for me nowdays
than my main PC, with an NEC ea244WMi and LG 29UM58-P
and at the end my X61T with an samsung screen that I got dirty cheap, I use it mostly for art and some coding.
And to be honest both thinkpads are mostly just locked and I use them via vnc/synergy if I have too do some minor work, and I get them in front of me when I need to do some serious stuff. Also my future plans are to change the screens for I hope another ea244WMi in pivot and changing the m2010 for something more useful for me atm. Probably I will organize some arms for all those monitors to get some extra space, and than I will probably move to another place soo, ye some updates will happen in future.

You will probably be upset when you find out that 2nd season of one punch man will be made by different studio and director.

QQ … not really I’m not that much into animu, I just like to watch it in free time.

Time for some Spring Clean-up & Overclock

I took some time to dust my main Pc and to do some planned maintenance, updated the UEFI, added a second fan in the front of the Define R5 and overclocked the 7700K to 4.8 Ghz at 1.260V (no delid yet, evein if I was thinking about it to make it even quieter) and it stays always below 75°C under full load without making a lot of noise, when it’s not under full load it is whisper quiet and that is really important for me, the Fractal case is awesome and the Corsair power supply most of the time, if not always, goes fanless 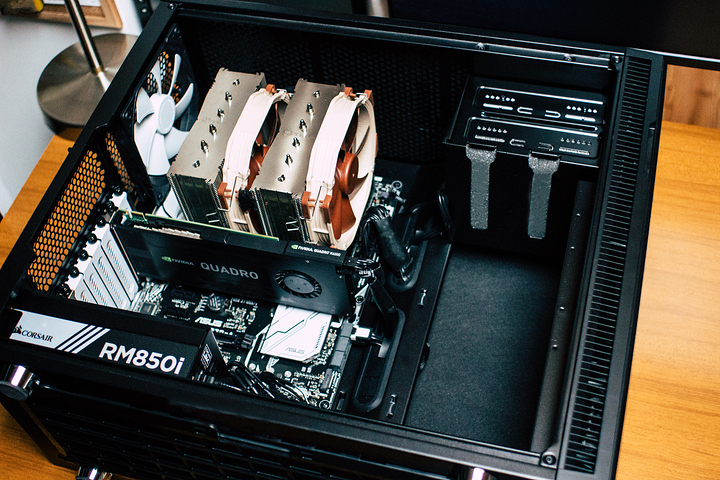 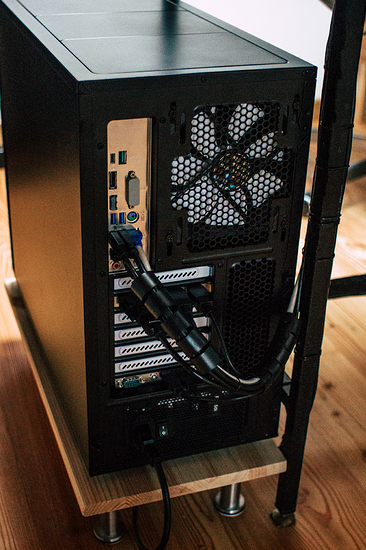 and yes, that is a serial port 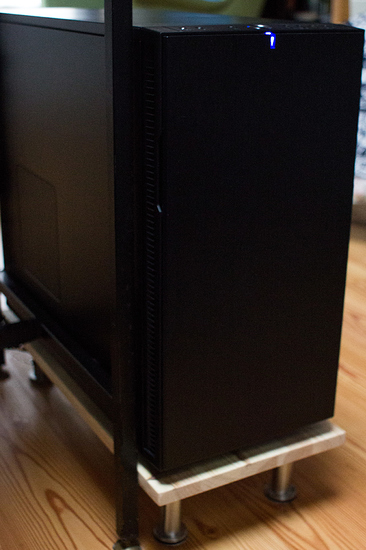 I did also some cleaning on my dad’s Autocad/SolidWorks Pc, i changed the thermal paste on cpu and gpu and updated the UEFI.
This was my old rig before i gave it to him when his old computer was not usable anymore (and for quite some time i used only my notebook with an external monitor and keyboard)
The cpu is a SandyBridge 2600K, now I overclocked it to 4.5 Ghz at 1.30V and even with the small Noctua NH-U9b it never goes higher than 45°C wich is amazing!
SandyBridge in my opinion has been a game changer, and at the time Intel didn’t use that terrible terrible

thermal paste between the die and the heat spreader, you could overclock easily without the whole system being a little thermal reactor 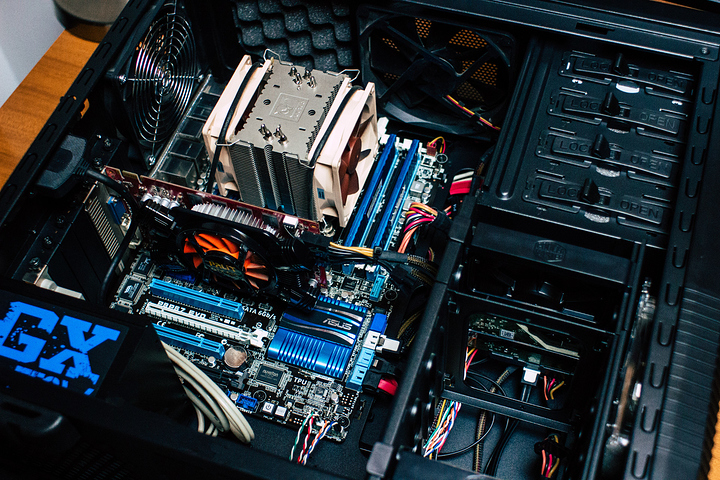 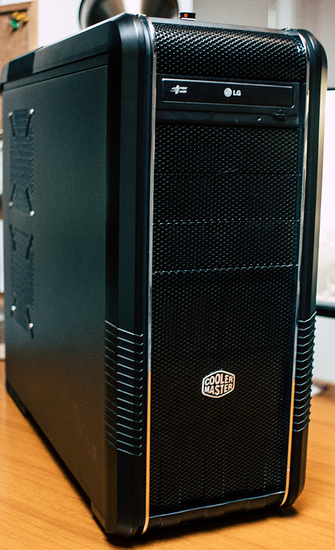 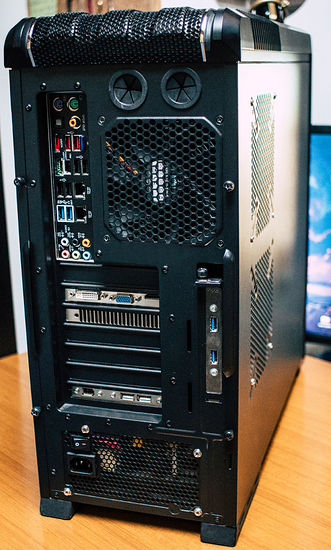 It’s crazy to see how much stuff was packed in the sandy bridge mobo, dual gigabit, bluetooth, eSata, firewire (no serial port tho

So now both of the pcs have the latest updates for the UEFI, Win 10 and the last release of Mint

(Again) Still need to clean up my room, but the failed cable management pro wannabe of me from last year is still the biggest horror I have to arrange a rethink of the plan, as I constantly move things around. For example, after my Hackintosh build is now stripped to a barebone for parts to my Linux PC, the cables are now everywhere, since the 800D case is too tall to fit into the designated spot inside the desk.

So, I’m afraid the next picture of my setup is after I get my friend around to help me again with the rearrangement.

Show us the horror! 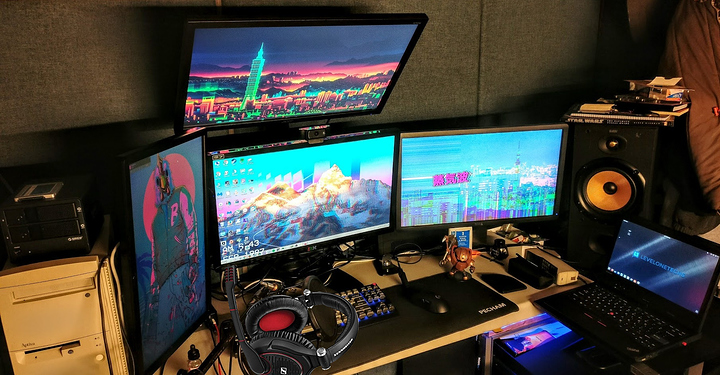 That laptop is dead now and has not been used for several years. I tried really hard to get it fixed because it was my 1st computer and cost me £1300 but the gpu would always die after one or two months. I did have a chance to replace the motherboard but it would cost £600 which I thought was too much.

need suggestions before i finish setting up everything XD
wt u guys think ?

my my , i cant even let white cables be , i color them to match hhhh 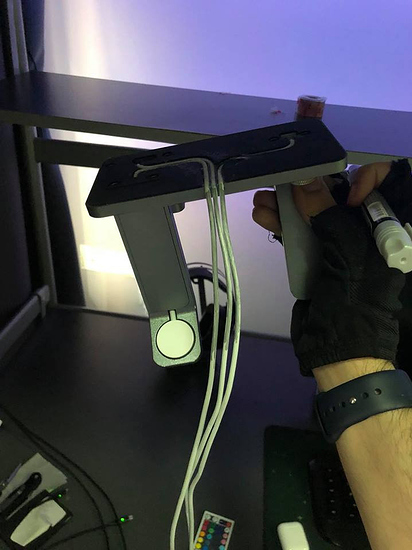 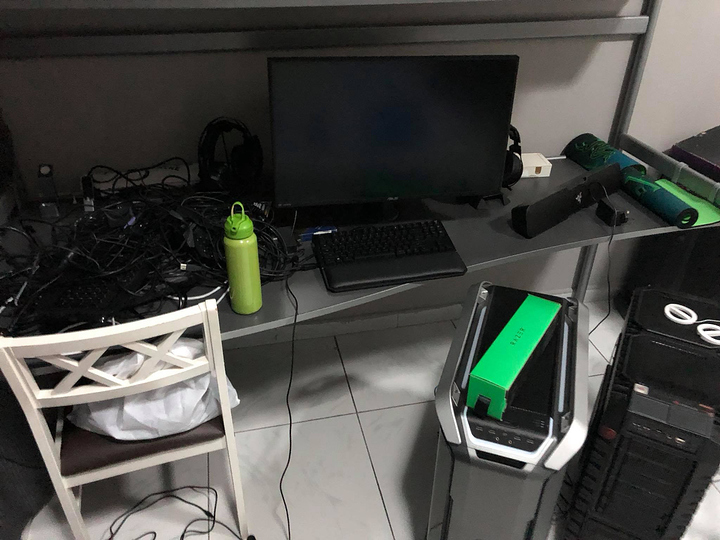 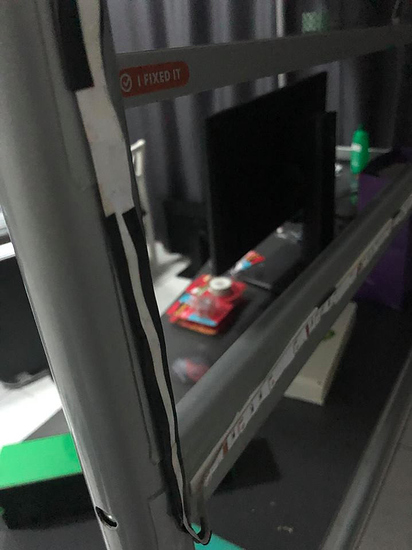 I really need to get some backlighting set up. Photo in the dark room with everything going maybe?

The cable mess on the left is distracting

ye the mess will be gone XD

I find that external cable management is a bear for me to tackle. I generally stuff everything behind the desk where I can’t see it, and hopefully can’t kick it too much.

Which is a terrible solution.

But I still can’t get myself to go wireless and deal with batteries instead.

Cases are going under the desk presumably? Or is this a system swap and simultaneous reinvention of the battlestation?

i will zip tie the cables to the steel bars of the desk , so won’t be visible i think

thats why i am painting the zip tie to silver/gray to match so it will be camouflage. as for the pc’s yes will be under the desk , main issue am still not sure

i will put only 1 , the other most likely will be temp there just to set up the NAS (have thread about building a nas and asked for recommendation ) but its too big to keep so thinking in very near future after i finish 1 setup and the nas working , i will get a Rak ,very small one then put it on the left side.

i used to play on the haf-x ( black case ) and had the 2nd system at friends house so decided to bring it , so i can game on one and 2nd will be nas + server + Test subject/experiments XD 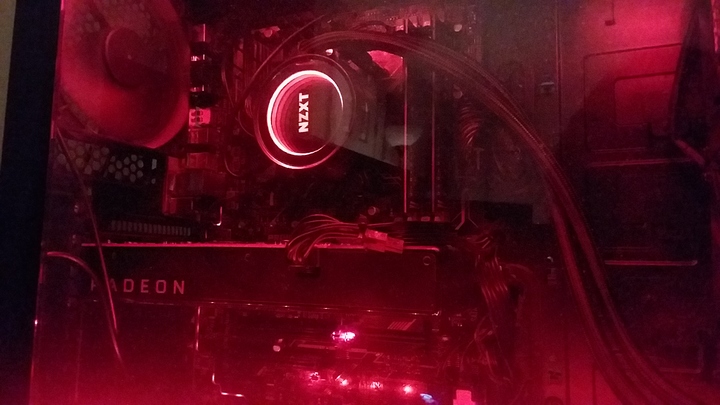 The more exciting upgrade is the Kraken 240mm. I was able to up my OC from 3.65 to 3.825. And It also dropped about 5 degrees Celsius. (I think it would be more if this case got decent airflow.)

So the current specs are: