I feel that with all the negativity that usually surrounds Linux, even if we want to or not, I thought that we could focus a bit on the positive.

The one who got me into Linux was a classmate in high school in 2006. He got me into Debian, and doing an install from the net edition. He asked me all sorts of questions to test me, and he never acted like any answer was stupid. Honestly, if it weren't for my classmate being so friendly I'm not sure if I had been so open towards Linux.

I remember when I first tried to install Gentoo I got a lot of help from the guys at the official Gentoo irc chat. They explained a lot of things for me, with use flags, package.use, and helped me set up my graphics drivers correctly on my laptop.

There's a lot more of the positive experiences, but my memory is lacking.

Which specific positive experiences have you had with a Linux community?

Yeah, I know what you mean. Sometimes people are really into a piece of sotware or a distro and dislike all the rest, because they think they're bad.

My experience weren't always great. I started with Ubuntu on a VPS when I was 13. Since then I was used to a GUI, so there was a lot of hate, because I installed GNOME on a VPS and connected via VNC. Nobody told me how to do right, they were all hating me.

But by far the best experience in the Linux community so far was Arch. The Wiki is great and the IRC members are all very nice and told me about everything in detail when I asked. Arch really got me understanding Linux deeper than Debian every has since I used it, because you have to do everything by your own.

Haven't gotten into Gentoo yet. But I'm going to try it soon :)

I never really had any negative experience in Linux in terms of community. I do not count the once in a while ass that bashes you out of a feeling of superiority. I mean these guys exist in every single human community. I find it naive and immature not be to be able to ignore them. You find these kind of dynamics everywhere.

Plus even some of the wiseguys tend to have useful information that you can take out from them.

The FOSS communities I have mostly interacted with were the communities from my old universities and they were always generally helpful. Even some of the arrogant guys ended up being helpful as they really did try to prove how greater they were by trying to solve your problems. And every-time I searched for something in online communities the majority of the people genuinely tried to help.

I really think that people fail to understand how complex human behaviour can be especially in an online interaction. Since communication in online communities is written, there are very limited ways to express tone and colour in what you write, or at least needs much more effort. Additionally very different people from very different cultures with very different codes of conduct take part. Ideal situation for misunderstanding.

As a result, combined with the fact that in my opinion people tend to be a bit over sensitive, understand everything as a insult or hate, when they are not necessarily. Even here, were the general level of interaction is really high, I have seen people being mistakenly bashed for being arrogant just because they tend to be a bit more headstrong with their opinion or people calling a typical heated discussion, a flame war. I am not saying that the negative parts do not exist but things are more complicated than people tend to believe they are.

As a result, combined with the fact that in my opinion people tend to be a bit over sensitive, understand everything as a insult or hate, when they are not necessarily. Even here, were the general level of interaction is really high, I have seen people being mistakenly bashed for being arrogant just because they tend to be a bit more headstrong with their opinion or people calling a typical heated discussion, a flame war. I am not saying that the negative parts do not exist but things are more complicated than people tend to believe they are.

That is not what I mean. What I mean is those who tell people to rtfm, read the fucking manual, and stuff like that. If you say rtfm to someone who isn't a friend or some crazy community like 4chan you're an asshole.

But anyway, please stay on topic. This is not a topic about negative experiences. If you want to talk about things related to that then please make an new topic.

I normally chill in the Opensuse IRC channels, the guys there are really cool.

The Opensuse community was the first large Linux community I was a part of. It's great.

Same here. I've stuck with SUSE since 10.2 and I always end up staying because of the great community and powerful community tools. Ubuntu has also been the same for me, so much that it's my go to distro in the Debian family. I think that's the best part about Linux: a vibrant community that's always willing to help.

I also pulled a joke on /r/Ubuntu on Reddit (which is currently the top post) and nobody has murdered me yet. In fact, everyone seems quite positive.

I really enjoy the community at http://www.cupoflinux.com/
no question seems stupid to them and they are always willing to help you out and they have a really active community.
they even have a linux game night.

I don't think anyone gives a crap about you and your setup/distro, except if it's 2015 and it's utter shit like this: 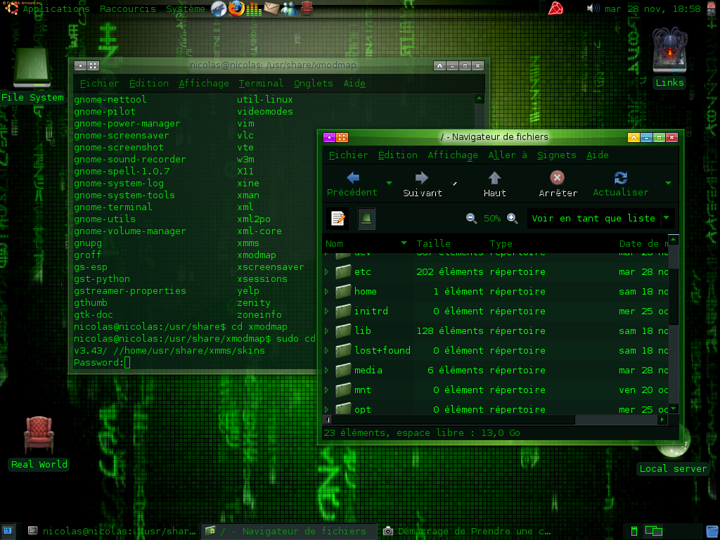 They just bash on you as others do with the "pc master race" and the peasants thing.
Except that linux users are much more cynical, and perverse then Gaben's whore-shippers.
People are just too selfish to give a crap about something unless it's beautiful, they can profit from it or it's really shitty.

I never faced any issue with the comunity and I ,honestly, never saw anyone having any (REAL) issues with it. Except, maybe the people going on /g/, the arch forums of 2006-2010, or any other hostile places like that and asking:
"what's the best distro ?" or "how do I use a package manager ?"...

as long as you stay away from /g/ you'll find the linux community to be pretty good. IRC is great and all popular distros have their own forums that are really helpful and welcoming to new members.

After using heaps of distros from arch to suse, i settled on ubuntu. A few years back i had some pretty embarrassing question about something to do with some sort of config. I was on ubuntu at the time so i tried the official forums. I'll never forget how quickly i got a response and how polite it was. Despite it being a bit of a noob question it got answered as if i was trying to crack the enigma code. Since then I've stuck with Ubuntu even though another distro would probably suite my needs better. just because of how large and friendly the community for it is. People love to make fun of it because its a "noob distro". hell, i embrace it. if this is what a noob distro's community is like, ill take it over gentoo pc mustard race crap! 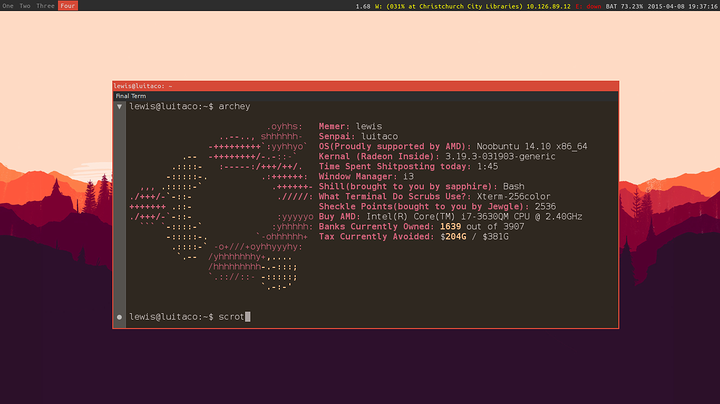 I can draw a parallel from your argument about beauty with weapons. For example, most Americans will choose an AR over and AK because an AR looks really sexy and is US made. The AK, looks blocky and rough and is made in the Eastern Bloc countries (some in the US). Forget the fact that the AK will drop you faster than the majority of the AR rifles, most people like the look of the AR over the AK and therefore wont give two shits about one.

I myself own a Mosin Nagant and all I get is grief because it isnt as pretty as an AR and shit like that.

Things like that translate well between the Linux side and Weapons side.
Likewise, the Linux distros running setups like i3 don't look outwardly sexy but are highly functional but most people will run away from it and prefer something like Windows 10 or MacOS because it looks sexy.

Things like that translate well between the Linux side and Weapons side.Likewise, the Linux distros running setups like i3 don't look outwardly sexy but are highly functional but most people will run away from it and prefer something like Windows 10 or MacOS because it looks sexy.

I haven't used tiling wm before. I've used Openbox a lot, does it work well on it's own with a panel if one wants to?

Im not sure. I use Gnome.

I haven't used tiling wm before. I've used Openbox a lot, does it work well on it's own with a panel if one wants to?

It really does. You can use a panel like Tint2 which stands alone or you can use LXDE which is a desktop environment that grafts a panel onto Openbox. You might also try Fluxbox which is very very similar to Openbox but has a panel of its own by default and the ability to group windows on top of each other like tabs. As for tiling window managers, I've not used them much but they do work well and tossing a panel on one makes it a little more manageable.

I use i3 and I instantly fell in love with it. While it isn't very pretty the gain in prpductivity is amazing.
Currently using it with an 15" Laptop Display and a 4K Monitor.

There is another WM similar to i3 called Awesome ( http://awesome.naquadah.org/).
Will try that soon