Really not important and I have submitted this question on the HP forum.

I’ve noticed that this laptop doesn’t ever get hot, unless it’s from the GPU, and this seems to be because as soon as there’s a constant load, it throttles right down. I can understand if it was getting near 80-100C, but it never goes over 65C and it does this by lowering the CPU speed down to 2GHz.

To resolve, so far I have:

I notice that when there is a very light load, the CPU hovers around 4GHz. When a load is applied (3D rendering), it goes down to around 2GHz. It seems it’s being a little too cautious about temps, which do not exceed 50-55C at peak.

When I’m doing graphics intensive tasks, I can hear the GPU fan spin up, but I’ve never heard the main CPU fan do the same - I’d have no problem with the noise if it’s giving me the performance I’d like. I wouldn’t expect the 4.6GHz Boost clock all the time, and I don’t think I’ve ever seen it, but it would be nice to at least have 4GHz at least.

May be this is the new norm with laptops, bit of a shame though as my old M2800 had no problem keeping at over 4GHz on all cores, though it did get hot! 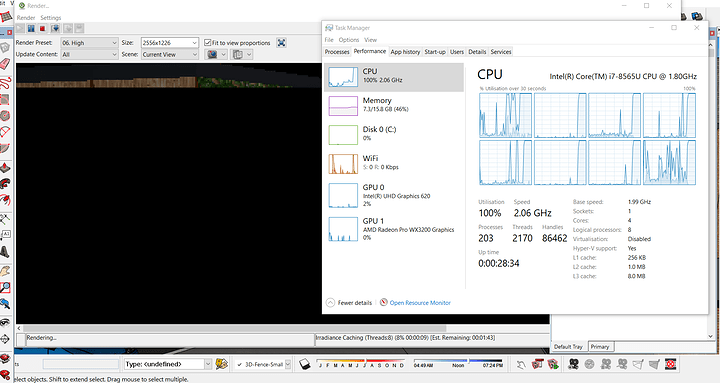 Idk sounds like a power budget issue to me. Maybe the powerbrick is not up to the task?

You could try downloading Throttlestop, which will tell you if it’s power limit throttling. If it is, you can raise the Icc Max and underclock the Vcore by 100mV or so to give the CPU a higher power budget.

Like @Riotvan says, it could be by design. Raising the power limit could mean that the laptop ends up draining the battery in heavier tasks, but if you can undervolt and increase the current limit to achieve the same max power (just monitor the max Vcore in a render without making any changes, and adjust the current to suit your undervolt), that shouldn’t be a problem, and should increase frequency.

Keep in mind that the 15W 8565u’s base frequency is only 1.8GHz, so don’t expect it to sustain anywhere near its 4GHz boost frequency, but somewhere between the two. Even the 45W mobile chips normally sit 600-800MHz below their rated boost speed in heavy workloads.

That’s a very fair point, I hadn’t even thought of that. It’s a 65w adaptor, although it is very small compared to my older laptop. It’s probably no more than 3 inches long and a few wide and around 1 inch deep. 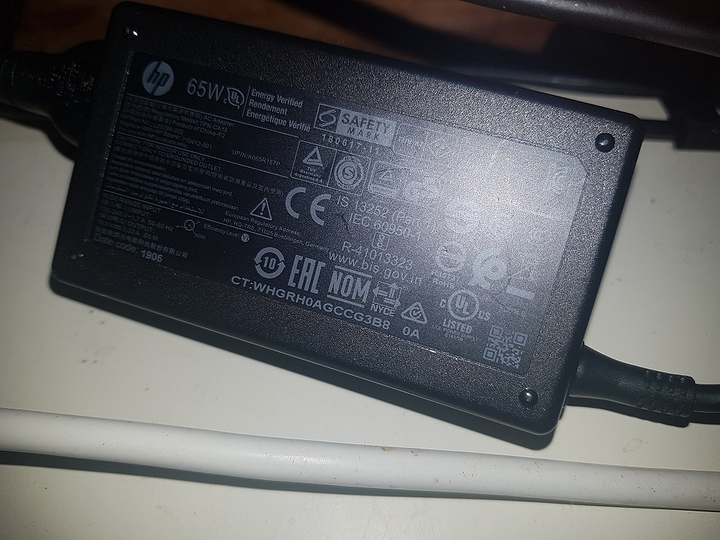 Wow, thank you and what a good S/W find. I’ve not familarised myself with Throttlestop but here’s a screen shot of it when I’m rendering: 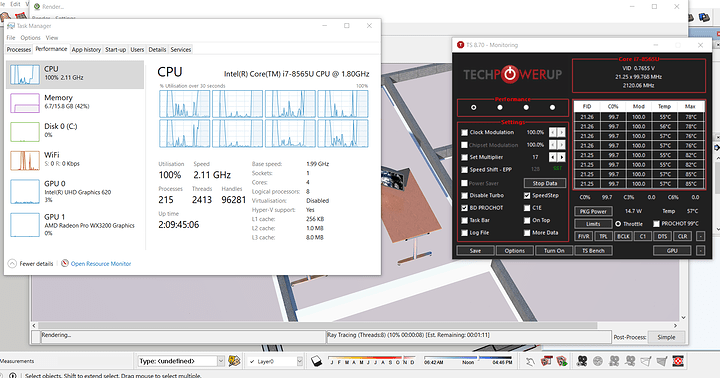 I also noted that the max power was 40W, though perhaps this was on start up.

I’m certainly going give your suggestion a try, nice one - and thank you for sharing your expertise

Thank you for concurring, much appreciated, I’ll look into another power brick if this is the limiting point

just as a note, It’s a common option on Enthusiast notebooks, not sure if it’s a thing with HP I could be speaking hogwash as far as normal consumer products go.

This is my first HP and I noticed it lacks a lot of BIOS options that other laptops have had. My last laptop (Dell) had an option to ignore heat and disable speedstep, which I felt quite handy as some apps don’t appreciate the CPU speed going up and down. 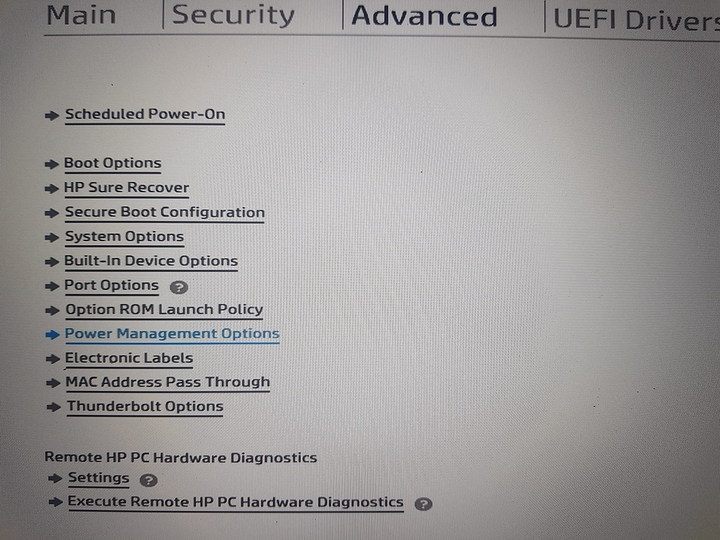 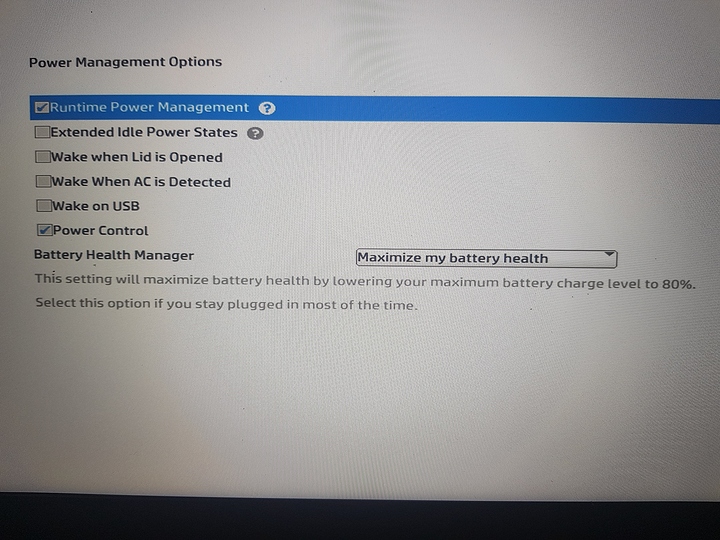 I turned off Power Control and Runtime Power Management, but no change.

Hmm maybe battery health manager is worth a shot? Perhaps it allows running partially of battery when disabled.

Probably reached 40W during the few seconds when it was boosting.

It does show it’s power limit throttling. You can change the voltages and current under the FIVR tab apparently -80mV is a good starting point for Whiskey Lake chips. You should adjust the CPU and CPU Cache voltages by the same amount with these chips.

There should also be an IccMax setting on the FIVR CPU tab. If you wanted to keep it at the same ~15W package power, just do a quick P=IV calculation using the voltage it reaches once the frequency plateaus. These chips are configurable by the OEMs up to 25W, so the only thing to be wary about is how well your laptop can manage the cooling, and how much noise you’d want to put up with.

There’s an inbuilt benchmark/stress test that you can use to quickly test stability, or just try out rendering your own stuff a few times.

In terms of keeping it applied once you’ve got a profile that works for you, you can set Throttlestop to launch at login using Task Scheduler. Just make sure ‘Start the task only if the computer is on AC power’ and ‘Stop if the computer switches to battery power’ are unticked (I had a problem before where unticking the top one greyed out the other, but didn’t actually change the behaviour). 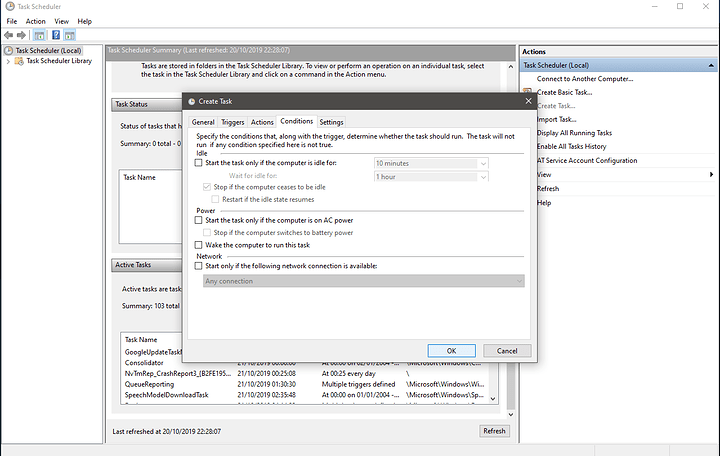 Using this with the profiles in Throttlestop, you can limit your package power to less than stock to squeeze out more battery if you need it, which is sometimes nice, then have a profile for on power which is made to clock as high and hot as you’re comfortable with.

I’ll definitely give that a go, thank you

Wow, thank you @Zavar , really kind of you to respond so extensively.

Re; Your earlier comment though, I will appreciate the base is 1.8GHz, I shouldn’t expect too much. It’s such a shame there weren’t more powerful but still respectable looking laptops around when I bought this. Although yes I use it for business, but I still have to pay for it out my own pocket (one man band).

I’m going to print your instructions and give it a go,thank you again