Hi all - I have searched and perhaps missed it but didn’t find this exact issue…
So I am new to Plex but have been around Ubuntu for a bit…i have plex installed on ubuntu server connected to an internal ntfs disk that is also a samba share on my local network…samba locally, plex remotely was the idea but i am having a helluva time getting a CONSISTENT plex connection remotely…it seems sporadic…i try now and cannot connect, but this morning all was fine…i have a pfsense router connected to a shitty TTNet service (Istanbul) and both have port 5001 forwarded and 5001 is listed as the port to forward in plex but for the life of me i can NOT get a consistent connection that is always available remotely, even though i can see in webmin that the plex services are running and regardless of whether or not i can connect locally…it seems totally random which to me sounds ridiculous, i know…
Has anyone had a similar issue with ubuntu/plex? both are fully updated and were just restarted…as of right now i can connect locally but not remotely…also, i can only connect locally through port 32400 EVEN THOUGH 5001 is forwarded and setup in the plex settings as the port to connect through and oddly enough i have had times where i could NOT connect locally through the IP address but could connect locally through the webapp…like wtf??? im a bit stumped and perhaps in over my head but i am like 95% of where i want to be…?

one other note - perhaps i do NOT have the port forwarded properly though i believe i do, but i can NEVER get a DIRECT connection remotely, only indirect (skipped through plex’s servers) whereas i believe i should be able to connect directly…is it possible that the infrastructure in Istanbul (or some government thing) is stopping that from happening and/or limiting the connectivity and making it sporadic? it seems to early for me to start blaming others for my failure but this is generally pretty easy stuff and im just not sure…?

I would check your Ubuntu firewall configuration first.

Once that’s done, verify that your pfsense router isn’t firewalling the port (from memory, firewall and port forwarding are two separate functions in pfsense)

You can also test to make sure that the outside world can see the service listening on the port with this service: http://canyouseeme.org/

Just throw the port number in and you’re off to the races.

i can NEVER get a DIRECT connection remotely, only indirect

This sounds like a firewall issue. Is it possible that your ISP (TTNet) is blocking incoming connections on their end?

it seems to early for me to start blaming others for my failure but this is generally pretty easy stuff and im just not sure…?

I like your attitude towards this, but if you’re fairly confident you’ve got your network configured properly, it’s likely they do block ports. My ISP blocks port 80, 25 and a few others. The only way for me to get rid of those blocks is to get a business connection. 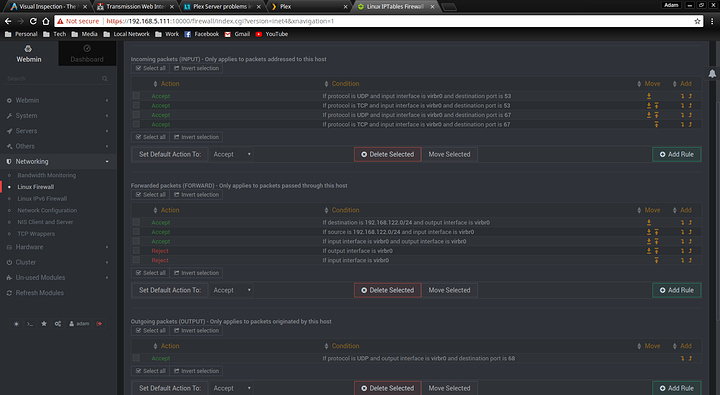 See thats the thing, I have a BUNCH of rules in the ubuntu firewall that were automatically applied when i installed plex. also i have upnp turned on in pfsense and the zyxel router
but the really weird thing is that it was working all day today and half of the day yesterday. when i got home i had to sign back in to plex or rather i had to ‘claim’ the server and after doing that i lost the ability to connect…so that makes me think that its in fact not any of MY gear or Turkey’s and that it is something in plex…? also i am using port 5001 which i think is the default for slingbox but i used because my ttnet router had a default rule set, so after setting it in that gear i added an alias and rules in pfsense and it WAS working…soooo many possibilities!!! guh…
thank you VERY much for your help so far i really appreciate it…i DID try a netstat test to see if 5001 was open and i didnt see that it was but i think i need to test it on the pfsense router and NOT on the ubuntu box so i will try that in a moment and see if it is open

well for anyone with this issue i was able to solve it…sorta…using the DMZ and placing my pfsense router into it as port forwarding couldnt get me up and running…either i was doing something wrong or, well, i dont know, but the DMZ works i suppose as nothing else is connected to the ttnet service except the pfsense router anyway so, its OK…not ideal but functional for sure

is plex updated to current? this was happening in my ubuntu plex EVERY time a update came out until i updated

nooooo i put the pfsense router into the DMZ of the modem/router that i got from ttnet…so it really isnt a problem UNLESS i plug something into the other ports on the modem at some point where its a (slight) possibility that i could spread something to/from the pfsense router to that computer…doubtful though so really im ok…and yea i was in a double nat situation but not im not but yea, port forwarding wasnt working and i didnt know why so i had to learn a bit about this (admittedly simple) stuff so, thats cool