And yet I already know what to expect going in.

I’ve been plagued by plan 9. My uncle worked on V3 wen it came out for his job, so he and either of my parents would talk about his work stuff and P9 would be mentioned. Later on I hear something about it in middle school from a teacher, then later on from that hera about it on forums and defcon and we’ll alright what the fuck is plan 9?

Fucking cool as shit, that’s what.

Plan 9 is a unix-like, distributed (as in resources), FOSS licensed (but not exactly foss), sarcastic dick of an operating system. It has its own tools, its own format, its own structure, its own kernel, and while everything was created at bell labs initially, everything after that legitimately just seems to be whatever the fuck a university student wanted to do today because they got the grant their teacher wanted.

P9 has the ability to talk to another p9 box and just take it’s processor, maybe that other boxes keyboard, oh and all your mail is done on that box way over there, and here you can connect to this box and use its CD drive.

P9 doesn’t have software that any normal human would use. I’m pretty sure the devs at suckless mainline plan 9, it’s all text. BUT you can fuckin pipe appliCATIONS INTO P9 FROM YOUR HOST SYSTEM.

Legit someone has chrome and youtube working on p9 somewhere.

The only thing I am thinking about now is my distributed gaming / workstation system I wanted to work on. I didn’t think about even describing it that way, but a main desktop you can pull resources from and where all your applications are ran, with a web connection or lan connection to a phone, laptop, or tablet. You’d get access to your steam, really, access to whatever you want.

Why is plan 9 not integrated into desktop linux yet that technology is a fucking banger.

A talk I watched 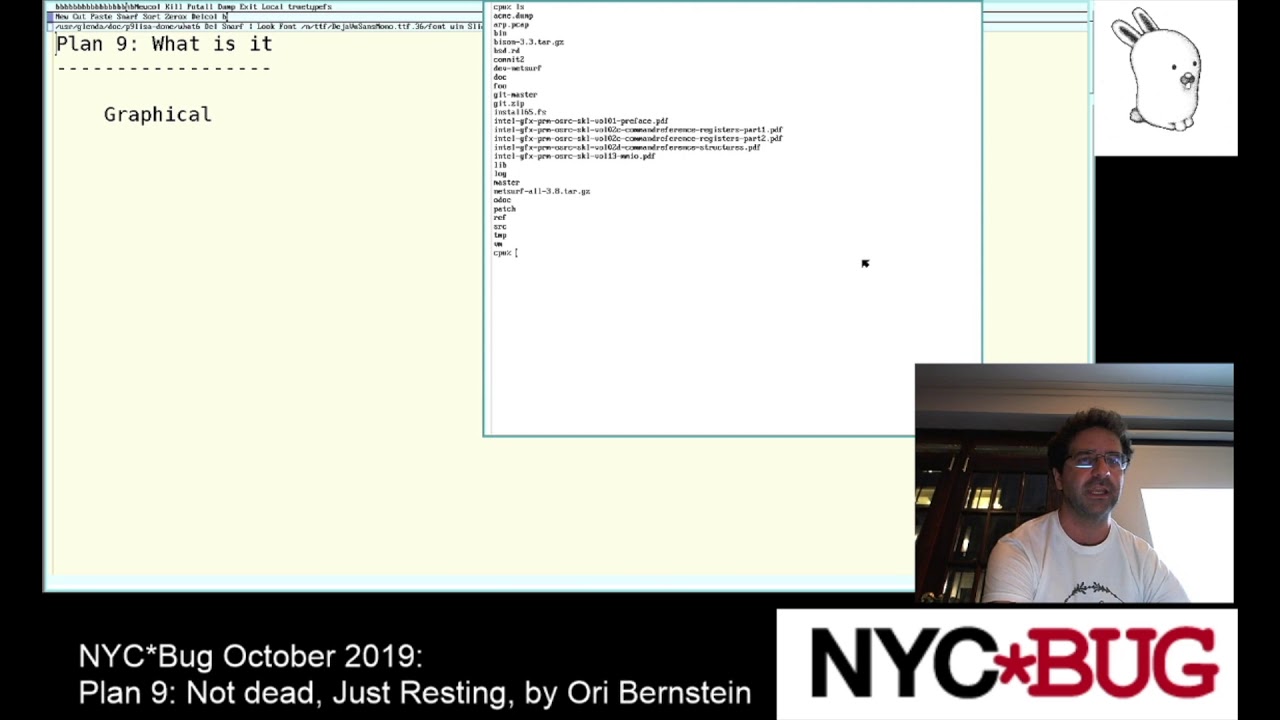 A port with HILARIOUS SHIT IN THE MANUAL
http://9front.org/

Srs look at the manual

Very nice!
Are they planning a 1.0 release this decade?

Yell at china first, then plan 9

It does look really cool.

Uhm, well there was already a final release in 2002, been around since 86…

It’s kind of been around lol. P9BL is kinda like debian, and then 9front could be called a ubuntu. In comparison.

Up to date code from users, and more than likely written by you and not someone else.

P9 seems to want you to have a plan going in, like my dish systems idea.

It just seemed a super-awesome design ethos, that has a load of potential. but never gained enough traction to get where it needed to go.

Seems to have had some really great engineers drop in, bang out some code, then move on?

But it’s way too low level for me to really understand how complete/incomplete it is.

Oh… Bell labs: “The final official release was in early 2015.” on wikipedia…

And yeah the low level comment is fair, honestly. It seems like an OS for ppl like me. Too bored nad too many resources tht aren’t being used.

Wasn’t correcting/arguing, I was surprised at the recent date in the opening paragraph of wikipedia.

I think Bell or Lucent washed their hands with it in 2002, and then went community?

But wikipedia is only wishy-washy on accuracy.

Plan 9 was a cool concept that was way ahead of its time, but like herd, to actually get any traction, you need to ship something actually usable to get shit done.

Theres a very old unix maxim that so many forget.

“perfect is the enemy of good enough”

Herd failed at this
So did plan 9

I don’t think so. I think p9 is serving it’s duty. For one, it’s what runs most of Comcast’s little dingus boxes. For two, I’m a new user to it and I’m god damn excited to play with it. It will absolutely end up in my pc setup at some point, if not for my idea, for dev purposes.

Cool shit indeed! I’m currently running 9front on my desktop, though not on it right now; so much to learn.

What do you do with it?

Just trying to learn it to get some experience in systems design and to eventually be proficient enough use it as a main system.

Guess it sucks to suck then huh

Plan9 is awesome. I messed with it in college in my Operating Systems class. Lots of cool stuff. Well ahead of its time. Keep in mind it is literally a research product. It was never meant to be marketed as a mainstream OS.

I am surprised it is used in something production quality, but then Comcast…

It’s literally used in mips multisystem applications. When those sett top boxes aren’t streaming to you they’re pipelining to whatever other box has tv going trying to boost the stream quality because there’s 0 room on the line. Often you even get multiplexed connections and that’s why at high noon of broadcast day sometimes your tv dun werk

Personally I want it integrated into itux as an 'in/out of - home streaming tool. Pipe your desktop out of your house!

A lot of folks originally from Bell labs who worked on it, ended up at Google working various distributed computing projects and some of them on Go… (either public or internal Google projects), and Go now just “accidentally” happens to be what Kubernetes and Docker and etcd and CockroachDB … just “happen to be” written in
… Coincidence? (Compare Go the gopher with Glenda from Plan 9)

Anyway, you send stuff from one computer to another using soft-realtime / reliability informed APIs. The soft realtime supporting APIs and patterns also happen to be useful when wanting to taper over various non-deterministic algorithms or robust algorithms that need to work with unpredictable data (such as for example when answering web search queries). Cross pollination of some of those ideas is amazing.