So my wife has killed another phone. Her HTC was given a bath in a cup of tea and was drowned. The second one, a Nokia 3 was dropped and the screen smashed. My wife is disabled with sight issues along with several other issues. So when finding her a replacement I showed her the Doro 8030 4G and she liked the idea of an easy to use smartphone. 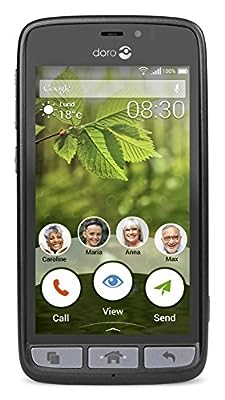 At last a smartphone for beginners. The Doro 8030 has a distinctive user interface that thinks how you do, presenting you with actions such as call, view, send and search rather than having to look fo ...

This thing is everything I hate in a smartphone. It’s running an old version of Android (5), it has the ugliest customised skin. It’s slow and lowest of low spec.

There is something I have noticed, much to my surprise. I really like physical navigation buttons. In fact the whole experience of holding it in your hand is really satisfying. It’s nice to hold, my thumb can reach the whole screen without having to do the cramp inducing hand yoga.

The Blackberry Key One has a full physical keyboard if it helps?

the best phones are the ones with corning gorilla glass version 3 or better.and non rounded edges just got my folks 2 htc one m9’s we will see if i like them more or less then my moto x 2nd gen ( relly like my moto other than battery life its a damn good phone)

The Galaxy S7 Active is a recent Smart Phone with physical navigation buttons. You could give that a shot.

I have discovered a few “rugged” phones that still have physical navigation buttons.

There is the Ulefone ARMOR

And the DOOGEE S30

The current king of the Rugged smartphones the DOOGEE S60 does not have hardware buttons but the feature set is dammed impressive… Maybe I need a rugged smartphone?!?