I’d characterize black mirror as half twilight zone, half drunk glaswegian in a room positing hypotheticals like “what if you had to charge your dog instead of walk it” while the netflix writers take notes.

Does draw some thematic elements from the genre, but it’s approaching parody in how those themes are handled.

Does draw some thematic elements from the genre, but it’s approaching parody in how those themes are handled

Acknowledged, you deserve a free beer.

“wot if your computer knew your name”

“wot if your game character had a mind of its own”

“wot if there was uber reviews for everyfing”

“wot if VR made you kill people”

“wot if reality tv was a religion”

“wot if your gran came back as a mechanoid”

Giving Language, Truth, and Logic a re-read since it’s been a while, highly recommended if you want to read the mistakes of a very smart man. Approx 50 years after he wrote this he denounced it, but it’s still a great read and it’s a good exercise to find what’s wrong with it. Language, Truth, and Logic is a 1936 work of philosophy by Alfred Jules Ayer. It brought some of the ideas of the Vienna Circle and the logical empiricists to the attention of the English-speaking world. In the book, Ayer defines, explains, and argues for the verification principle of logical positivism, sometimes referred to as the criterion of significance or criterion of meaning. Ayer explains how the principle of verifiability may be applied to the problems of philosophy. According to Ayer'...

I wrote a philosophical rambling here today as well.

My current worldview is shifting around a lot and I wanted to share a bit of a pseudo-philosophical position since I am part of this community a good debate will help me sort through and strengthen a few of my accounts of things. Feel free to give this post a thorough reaming if you so feel appropriate. My first proposition is a stance on the current state of public education – think of it as a diagnosis. I am highly critical of public education and I think that since the Nixon years (watch Noam Chomsky’s talks of the trilateral commission) it has only served to gear our minds to understand the mechanics of technical procedures that we will become so encumbered with that we can’t think straight. The technist view of the world limits our perspectives of interiority (see Donaldo Macedo Literacies of Power). As hindsight is always 20/20 in questions of ethics, current political actions are seemingly always 1 step beyond our immediate understanding for some reason. Why? The news and television started becoming an issue during the 70’s to the 90’s (Neil Postman, amusing ourselves to death) but now with the onslaught of the public internet and fake news, we are overloaded and inundated with information saturation. Combine this with the deep subconscious racist ideologies and senseless violence happening at home we realize that we have serious problems, but it is also reciprocally unclear on how to deal with them – public education falls short of preparing you for critically thinking about these problems. (Unless you study philosophy). Even the richest schools with the most prestigious background fail to prepare their students for problems of this caliber, as their interest is in grooming the next generation of wealth holders to hold their wealth. Zooming in to education a little more, I found a very specific type of educational bias that has been built into the sciences which I think had been birthed in the Vienna school and Analytic philosophy. Logical positivism…

Lots of psychological insights in this one. The Gulag Archipelago (Russian: Архипела́г ГУЛА́Г, Arkhipelág GULÁG) is a three-volume book written between 1958 and 1968 by Russian writer and historian Aleksandr Solzhenitsyn. It was first published in 1973, followed by an English translation the following year. It covers life in the gulag, the Soviet forced labour camp system, through a narrative constructed from various sources, including Solzhenitsyn's own experience as a gulag prisoner, reports, interviews, statements, diaries, and legal...

The Road Less Traveled, published in 1978, is Peck's best-known work, and the one that made his reputation. It is, in short, a description of the attributes that make for a fulfilled human being, based largely on his experiences as a psychiatrist and a person. The book consists of four parts. In the first part Peck examines the notion of discipline, which he considers essential for emotional, spiritual, and psychological health, and which he describes as "the means of spiritual evolution". The...

Examine what it means to be human as taught by an intelligent talking gorilla. Ishmael is a 1992 philosophical novel by Daniel Quinn. It examines the mythical thinking driving modern civilization, and the relationship of this world-view to ethics, sustainability, and global catastrophe. The novel uses a style of Socratic dialogue to deconstruct the notion that humans are the pinnacle of biological evolution. It posits that anthropocentrism and several other widely accepted modern ideas are actually cultural myths and that global civilization is enacting these myths with cat...

This is my current read. I am taking my time, because it is such an important book.

The Opposite of Hate: A Field Guide to Repairing Our Humanity

“A stunning debut by a truly gifted writer—an eye-opening read for both liberals and conservatives—and it could not come at a better time.”—Adam Grant, New York Times bestselling author of Option B, w ...

The bad news from Sally Kohn: We all hate, and if we think we don’t, we’re lying to ourselves. Kohn’s good news: With fearless scrutiny of our personal histories, motives and prejudices, and by connecting with those who are different, we can hate less. To launch this growth, she insists, we must be willing to admit to the biases that fuel our hatred.

Seems like an interesting read. Should be included in my holocaust studies section of my library.

Not bad. Sort of sounds like MLK’s message about loving our enemies.

bell hooks (sic) has some great work on that subject as well. I’d recommend any of her work.

Sort of sounds like MLK’s message about loving our enemies.

I am not done reading the whole book yet but I learned a good method yesterday. If someone is arguing AT you try this:

“While I don’t agree with everything you said, point #17 makes sense. Tell me more about that.”

Sure, that might work in a respectful environment. In regards to political argumentation I always try to find an “out”. For example if a bully is just going on and on and pressuring everyone with his ‘brilliant’ opinions during a company outing or event, I will wait for the right moment to strike and expose a simple lapse in his logic and embarrass him in front of everyone. After that I simply announce to the audience that I am ordering a round of drinks to lighten the mood and get everyone on my side so I won’t be stuck talking to him for the rest of the night.

Post some interesting books you read that interested you philosophically. My bias is that it should somewhat relate to the field of technology, since we are in that type of community, but it does not have to be that.

Gödel, Escher, Bach by Douglas Hofstadter
The Fabric of Reality by David Deutsch
The Tell-Tale Brain by Vilayanur S. Ramachandran

Meditations by Marcus Aurelius ripped and regrowed the roots of my being, not the pure philosophy, but the human context of it

This thread is a treasure chest, awesome!
Here you go:
Guns, Germs, and Steel (text only version)
Also, I second this

Gödel, Escher, Bach by Douglas Hofstadter
The Fabric of Reality by David Deutsch

Has anyone read this one?

This one is good if you want an overview of modernity for greater context without trying to piece it all together yourself from dozens of dense, translated books. 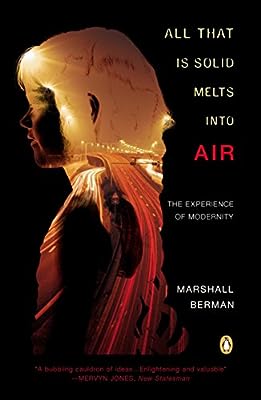 All That Is Solid Melts into Air: The Experience of Modernity

"A bubbling caldron of ideas . . . Enlightening and valuable." �Mervyn Jones, New Statesman. The political and social revolutions of the nineteenth century, the pivotal writings of Goethe, Marx, Dosto ...

The author is a Marxist, but the books is (I would say) an apolitical account of how modernity developed. I think it would be a good precursor to The Gulag Archipelago (mentioned earlier by @SesameStreetThug) since it provides some context for the Communist Manifesto.

Interesting. Yeah, it seems to be the more work does that the more I want to put it down because I don’t have access to some of the obscure texts they reference.

I haven’t tackled political texts recently but this will be on the top of my list when I return to it.

The majority of books written by Greg Egan.
He is on the diamond end of the sci-fi hardness scale, his books feature transhumanism, mind uploading, acorporeality, generating minds from random noise, mind cloning and more.
Arguably his books are not philosophy, per se, but I would still recommend the vast majority of them, and they do prod you to think about philosophical questions.
Special recommendations for Diaspora, Schild’s Ladder, Permutation City and Distress. (not sure if they are still in print, if not you can grab an EPUB copy from Libgen (dot) io)

Also might add some novels from Peter Watts here, although I have my reservations about his works, they have been memorable.

In 2975, the orphan Yatima is grown from a randomly mutated digital mind seed in the conceptory of Konishi polis. Yatima explores the Coalition of Polises, the network of computers where most life in ...

Arguably his books are not philosophy, per se, but I would still recommend the vast majority of them, and they do prod you to think about philosophical questions.

Even an anti philosophy stance is still a philosophy, it is the only true recursive discipline!

So he’s on the Hardness scale, I’ll have to check this out. I was thinking about picking up Dune the other day, do you like his scifi works?