Hi guys, I have pretty much decided on taking a Phantom 410 white for my very first, shown below : 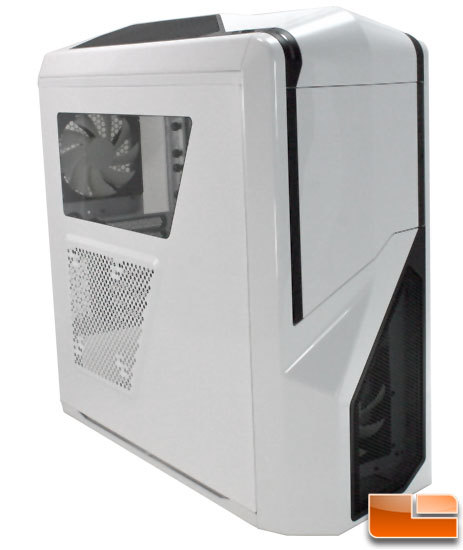 Here is my plan for the cooling/airflow solution, is it a good one? (Sorry, my current laptop doesn't have my photoshop on, had to resort to paint. *cringe*) 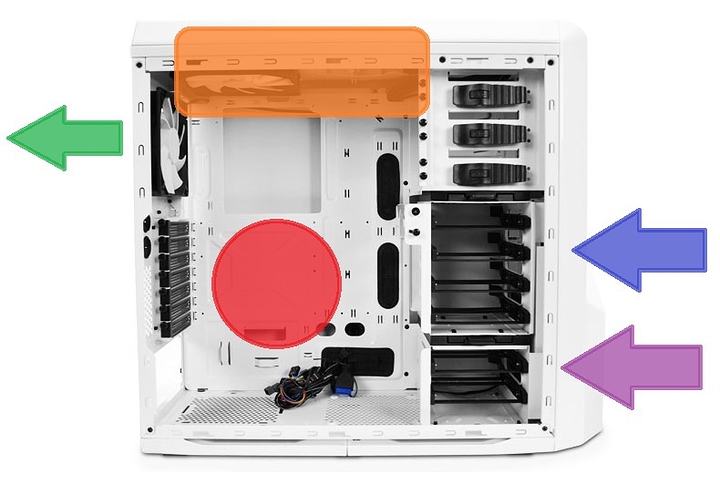 Also, on a lesser note, will the side fan provide a decent level of lighting inside the case? Not much, but just a dim glow?

Looks pretty good but if you have the money you should add intake bottom fans. I have seen a few different setups for the 410, but it is probably one of the best cooled mid towers you can find. I have the NZXT Tempest running with 2 front, 2 top, 1 side, and 1 rear fan and my parts stay frosty. As far as glow, my Tempest came with a blue LED side fan and it adds a *very* dim glow. Most likely it is drowned by the green LED in my Zalman CNPS CPU Cooler, which throws off a lot of light.

If you care most about lighting I suggest you use something like the bitfenix alchemy or the NZXT sleeved LED kit, because adding more fans means louder rig. I myself only add a second 120 mm NZXT FN fan for the front intake and remove the upper HDD cage because I don't need it right now and that provides direct airflow towards my GPU as well as my CPU cooler. If you don't have a really long graphics card, and you still manage to use the upper HDD cage, you can add another 120mm fan on it, and I think you can get a slightly better temp because you can adjust the angle whether the airflow is more directed towards the GPU or the CPU cooler. It may also give better lighting if you use LED fan there. I am not really a fan of putting fans on the side panel or the bottom for intakes because there are no dust filters on either side, but if you clean your case regularly then I guess it won't be a problem, temp wise you won't get much improvement, maybe a couple degrees, but noise wise it will be quite significant.

Currently, I am using Hyper 212 evo with push-pull configuration, and I get a quite nice temp. My 3570k at 4.2 GHz has around 7-10C delta temp at idle, 42-45C delta temp at full load (tested with prime95), and 35-37C delta temp at gaming, and during those conditions all the fans (2 front 120mm, 1 rear 120mm, 1 top 140mm) are set to low speed. I don't really tweak my GPU (HIS 7950 IceQ), so the temp is not really a problem, last time I ran the MSi kombustor, it only got around 30C delta temp at full load. For the lighting, I use the NZXT Sleeved LED kit (white LED) and that works really well with the blue LED from the stock fan and the white color of the case (I have the white Phantom 410 with black trim). I gotta admit that it is not the most silent rig in the world, but it is pretty silent compared to my old E7400 rig. I don't know exactly, but I think it is around 35-40dB depending on the fan speed.

More fans barely adds any noise. When I was running an IGP, with my 6 fans going, my computer was nearly silent. GPU will always drown out the sound of those fans as my GTX 260 produces a decent amount of noise. Another thing that is very important to remember, heat is the biggest enemy of hardware! I would rather have a little extra noise and keep my components cool so they can run longer.

Well most aftermarket GPU coolers nowadays are pretty silent and they do a pretty good job for overclocking, so the noise you'll be hearing is mostly from the case fans or the CPU cooler/ radiator fans, hence adding more fans around the case will affect the noise quite significantly. But you can always get non LED silent fans with good performance, e.g. Noctua fans. Up to this moment, I can't find LED fans that are as silent as Noctua's. Another thing I forgot to mention is the placement of your PC tower. I put mine right beside me, that's why I can hear it running. It is not as loud as a jet engine, but I can tell whether it is on or off even without the LED.

I totally agree that heat is the biggest enemy of hardware, but most of the time, the heat problem is about the CPU and GPU, and adding more fans around the case won't really give much improvement for them compared to the amount of noise produced. Others like motherboard or HDDs won't produce much heat. If you want better CPU/GPU temp, then try to find the best performance air cooler or consider going the water cooling route.