You could always make a WTS post for it. You can change the title to [WTS] Phanteks PH-TC14PE_BK and include pictures of the cooler with your username somewhere in the photo written down, not edited in.
I say around $60 shipped should be a fair price. Its not like a water cooler where it may degrade over time.

I will give it a try in the morning. I am hesitant because I need to also sell my r4 and z97 ud3h mobo .I'm assuming if I can sell the air cooler the other 2 items shouldn't be as hard, I hope.

Never know until you try. Cases are a little harder since the shipping cost will be the result from the size of the box. As for the motherboard probably around 70% to 80% of its retail value as long as there is not any physical damage to the board.
You can always put multiple items in a thread as long as you meet the requirements of the BST section of the forum.

everything is well taken care of. i have original box/accessories for cooler and mobo. no box for the case, ill probably put that on reddit as local pick up.

if you could provide a picture from the cooler with your nickname and date writen on a piece of paper,
viewable in the picture for physical evidence.

Then i can move this thread to the Buy Sale Trade section if you like to.

I know it's a bit oftopic, but you can use this cooler in many mATX cases... Arc Mini R2 for example... TT core V21 I believe was a cube Thermaltake case that can fit it... Those are just first two that came to my mind...

You can always go to the newegg listing or the manufactures website and it tells you the cooler compatibility. As for the PH-TC14PE its 171 mm in height with fans installed so you will need a case that has at least 180mm cooler compatibility.
In the Arc Mini R2 from fractals website it says only compatible with cooler up to 165mm tall.

Yea, you are right. i been doing some research and someone managed to fit this cpu cooler in a node 804. except they used low profile ram,Crucial Ballistix Sport 16GB. Now, I am left with 2 sticks of hyperx fury white. the crucials have a height of about 30mm, the hyperx furies have a height of about 31mm and may be wider. The build I am using as a reference has the same mATX mobo i want to use, gig z97mx gaming 5. I really dont want to purchase other sets of ram , at the moment, given i will upgrade cpu cooler early next year. And I am still hesitant on selling the cpu cooler given shipping costs and what not. 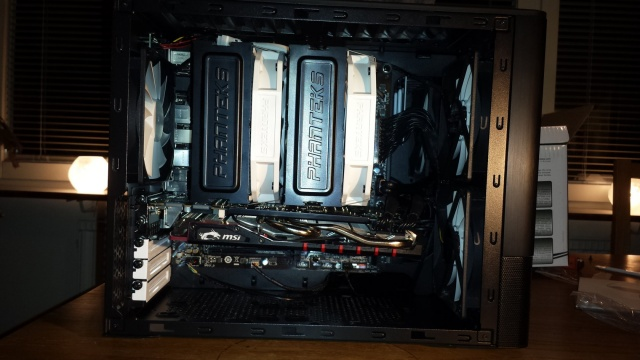 This Phanteks is an awesome cooler on the level of D14 and it looks better than D14... If I had this one I wouldn't mind the ram limitations... My D14 just don't fit my build idea...
You can sell it, but I would rather keep it, cause it fits in Fractal black and white case like a glove...

Yea, I would rather keep it. I'll probably figure out what to do about the ram. hopefully there will be clearance for ram. worst case, I buy some cheap ram sticks on sale or something.

Just replace the front fan with 120 and this will open up 20 extra mm for ram...

By the looks of it, I might be able to do that. Now, Im still looking into whether I will have at least the two outer ram slots clear of the heatsink.
Im assuming if on an ATX mobo I was able to have clearance for all 4 I should be able to have clearance to at least the outer 2 ram slots, I realize I wont take advantage of the dual channel. It is a sacrfice I am willing to take for now. Thanks.

The Phanteks PH-TC14PE basicly has a ram clearance of 40mm.
But you can also move the fan up.