Now that I have my pfsense router up and running, I’m trying to set up some rules to allow the “smart” TV and the fire sticks in the house to just bypass the VPN.

It seems pretty straightforward enough, but it’s just not working.

First I set up an Alias, and I plugged in the IP address belonging to the “smart” TV.

Then I went over to rules, and created a rule…

…that utilizes the alias I created… 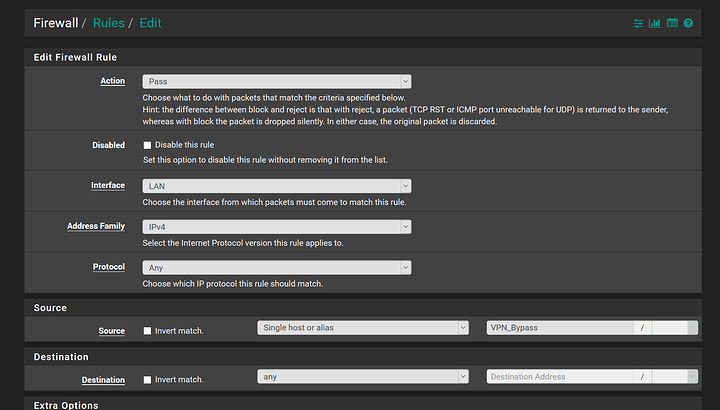 …and sends it through the unprotected gateway

Right? What did I miss? Amazon and Netflix still tell me they’re being routed through a VPN and won’t let me stream. I’ve tried resetting the state tables, restarting the TV, nothing yet. I’m not sure what else to try.

Edit: Nevermind? It seems to have started working after a half hour or so of waiting around. I added the fire stick in the bedroom to the alias and that’s also working so…yay I guess?

All of a sudden Netflix and Hulu won’t stream, they just time out. I’m not getting the proxy error anymore, they just time out every time I try to stream. It was working for like a day, then it just stopped. I’ve dried changing to different DNS servers but that route hasn’t made a difference.

Anyone else had this issue, or maybe know what to do about it?

Edit: My wife managed to get Hulu working on her phone, which is not bypassing the VPN, so…I suspended all the VPN bypass rules I made, basically putting everything through the VPN, and Hulu now works everywhere. (Prime and Netflix now don’t because of the VPN, rather than Netflix and Hulu not working because of apparent connectivity or speed issues.)