Initially I was thinking this was a discourse bug, checked meta.discourse.com and it works fine.
Suspected touchpad bug, but hmmm nope I guess, as other sites don't do it.

Thoughts? Using the scroll bar is better, but a bit notchy feeling maybe.

HP Envy 13-D109TU is the laptop, in case that helps? It's not unbearable and won't stop me coming to the forum, but it's a bit horrible.
Any suggestions of what I could try would be appreciated.

First and foremost, are you using IE7 or below.
Kek

Though really, wut browser are you using? And do you experience the bug across browsers?

I'm a moron. I use Vivaldi, will report back after using... cough Edge...

vivaldi is similar to chrome, could you try using the latest chromium to just see if the issue is present there as well?

I figured as much, some browsers just don't play very well with certain page elements.
it's a silly, but very real issue.

So I installed chromium, still a bit laggy but far more acceptable. Edge is insanely responsive by comparison. Ugh.

works fine on firefox. Only srolling lag i have is when its loading more of the page

I was considering using Firefox to get around it actually. At least I know what it is now. Thank you everyone.

update: I've changed to Firefox once again. All seems well.

Tested on my Win7 notebook (Samsung R???), no lag in vivaldi, chromium, netscape or firefox using the touchpad.

So your touchpad driver is writing to the windows registry 1k times per second. Check process explorer for confirmation. Might be the Vivaldi lag

I'm a real noob at this stuff, willing to learn but generally don't have the time. Had a quick look before bed, Process onitor seemed to give useful info (maybe)

This is what it does when scrolling this topic in Firefox: 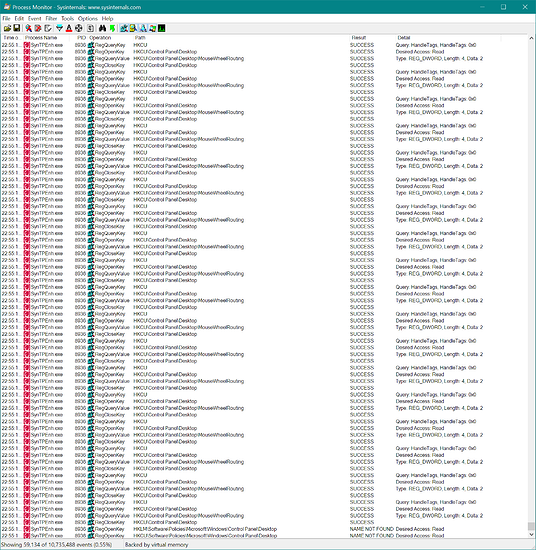 And this is what it does in Vivaldi, though the more testing I did the better it got - to the point of being the same as Firefox. Still not as smooth though. 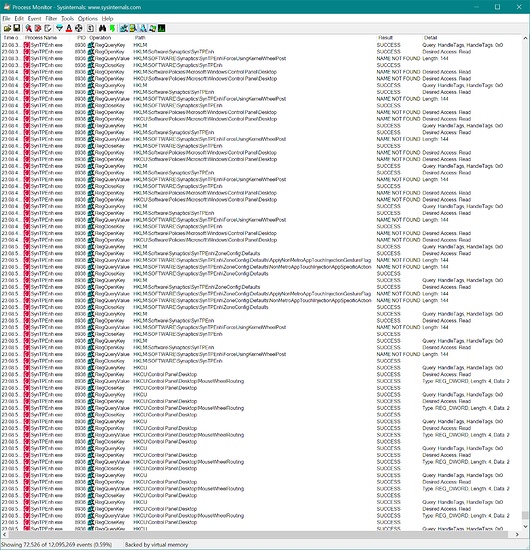 I'd like to say I'll check back after work tomorrow but I may not have time. Might hunt for drivers to see if there's any updates or whatever. Thanks all, and if anyone has better directions for a noob to get useful info for diagnostics then by all means... but as Firefox works don't waste your time for my sake - unless you want to satisfy your curiousity.