I’ve recently built a system and the temps are very inconsistent. During CPU/ GPU stress tests, temps are great (hover around the low to high 60s mostly). But when Im playing games, they can shoot up to the 80s easy. I realize more electricity = more heat so more active components = more heat. But when Im downloading things from Steam/ Gog, my temps for CPU EASILY reach 80 to 85c (screenshot attached)

I personally have wasted a lot of time with this system and getting tired of working with it so if anyone has any insight, Id love to hear it. I dont overclock outside of PBO and XMP profiles. Should also mention that the rig is in a pretty open area, propped up a good 6 inches with wire stilts so air shouldn’t be an issue. 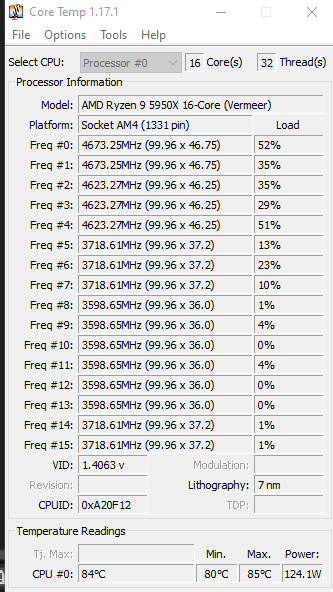 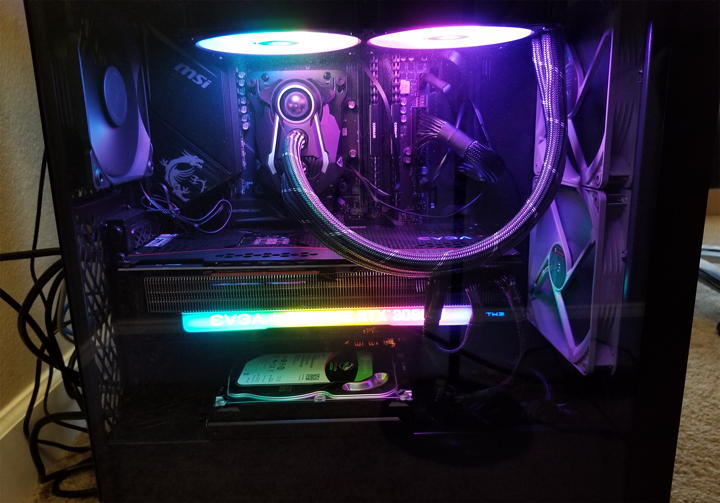 I don’t see anything out of the ordinary and what you experience seems normal. When you are stress testing both the gpu and cpu, the processor is under extreme 100% loading and so has to drop the clocks and voltages considerably to get under the wattage permitted spec.

But when you game or download you are only using maybe 1 or 2 cores so the processor will boost the clocks as high as possible which requires more voltage. More voltage = more heat.

Your CoreTemp screen shot supports that scenario with two cores boosted the max, then 3 more boosted a bit less and the rest of the cores basically idling. You are well within the power limits with such a light load and you will have high temps with the high boosts a few cores are allowed to achieve.

Just wanted also to state the 5950X runs hotter compared to the 3950X with the same exact loads and components. I have run both in exact copies of the builds. Just the nature of the 5950X. And you are well with the processor limits of 95° C. still. Don’t worry about it.
I run my 5950X’s under 95% core loading 24/7 doing scientific math and they run constantly at 77-85° C. all day long. I have custom cooling on all my computers also. 3 5950X’s and a couple of 24 core Epyc cpu hosts also.

It is not likely an issue. Could be thermal paste application. But when I run handbrake an avx based program I get 75c usually. That is also in a much more controlled ambient temp room (basement).

Before we continue and try to help(sic), do you want it to run consistently hot, or not hot at all? Inconsistantly(sp) hot seems like a not terrible thing, that’s what cooling does

Thank you very much for the reply, guys! I really appreciate it.

@KeithMyers Glad to read that. I guess I’m not use to a CPU running as hot as this one. What kind of cooling do you use?

@Pauld42 I hope it isn’t a paste issue. I repasted a few times already.

@Argone My dream was to bring the idles to the 30s and the loads to the lower to mid 70s consistently. Gaming doesn’t agree with me though, haha.

You’ve stated that you’ve enabled PBO and XMP? Does this issue still occur without them? The first step (since you’ve repasted) might be to reset your BIOS settings and see if the problem persists.

If the problem does persist then you might want to explore undervolting your CPU. The process is a bit intensive (changing values, checking performance hasn’t reduced), but under volting should help reduce the temp of your CPU.

During CPU/ GPU stress tests, temps are great (hover around the low to high 60s mostly). But when Im playing games, they can shoot up to the 80s easy.

What specific stress tests were you running?

Bios is (almost) at default. I think only thing I’ve changed is the XMP profile. It ran at around the same temps even when that and PBO were shut off.

I’ve ran furmark, prime95 and cinebench. All with great results.

Have you set any custom fan curves for the chassis fans in the BIOS or through software?

Also, maybe try Y-splitting the fans on the Arctic Freezer to a fan controller or header and controlling those through the motherboard. If you do that, you will have to move the cooler header to the AIO pump header and disable CPU monitoring in the BIOS fan control section to avoid the “CPU Fan” error during boot.

Thank you for the reply!

I read that the Liquid Freezer 2 pump runs at full speed regardless so is it necessary to do all of that to control the fans?

I’ve messed around with the fan profiles but didnt settle on anything specific. Didnt seem to make a huge difference.

The heat load in that case with the cooler as an “exhaust” its no wonder temps go up gaming. That 3080ti is going to crank out a LOT of heat directly into the case which then is vented through the radiator for the cpu cooler.

If you had the radiator on the front as an intake you may see cooler temps gaming.

Personally I do cool air intake and exhast through my radiators but both my cpu AND gpu are water cooled so I can control where that heat goes. With the open air gpu cooling in the case and then adding in trying to cool the cpu that set up will definately get warmer gaming than it would say doing prime 95 or another stress test.

Exspecting a Ryzen CPU to idle at 30 is a big ask even with a custom loop. They have internal spikes all the time. Even messing with ryzen power settings in windows, making sure cores can “sleep” properly at idle, and every other trick in the book, with beefy rads (ie dual 240’s, or 60mm thick 280mm) my best is resting mid 30s maybe 32 on a cold day in the house. Those chips expecially when you get up to 12 cores run a bit warmer and wont idle like intel if thats what your used to like I was when I started to use ryzen.

I’ve messed around with the fan profiles but didnt settle on anything specific. Didnt seem to make a huge difference.

Dumb idea: Have you tried turning the rear fan around so it acts as an intake?

Probably not if the pump runs full speed all the time. However, owning the 360 version of the Liquid Freezer II, the fans kind of suck for static pressure, especially when compared to Noctua or Be Quiet’s Silent Wings 3.

Edit: On the Be Quiet Silent Wings 3, if you go that route, get the “PWM High Speed” variant, as those have the higher static pressure.

I would not move the Rad to the front with this AIO. The GPU temps will increase significantly.

have you tried reducing your soc volts a little.
your motherboard may be being generous with volts so maybe drop the soc volts by 0.100
if your stable then try another 0.050 and test again.
each drop should see temps decrease at max load. 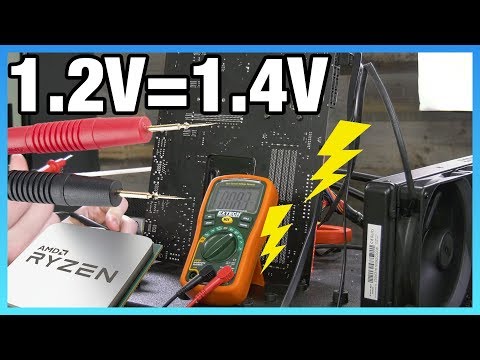 i know steve is talking volts.
but volts = reasons for high temps. and explains some of the reasons for changing them.

I only suggested that because the OP was concerned with CPU temps. I had assumed the GPU was fine. With that beefy of a cooler one would assume it would be ok. I was more focused on the heat soak of the radiator for the cpu loop.

It makes sense that in GPU benches and CPU benches alone each would cool enough, but i bet if you ran both at the same time you would find that the air flow in the case my a be a bit less than whats needed for “optimal” cooling.

Honestly it seems to be working ok, Im sure it could be tweaked some. Unless your like me and NEED a Delta at idle of less than 5C (because im a little nuts about keeping my gear wayyyyy cool), and your not thermal throttling, you should be totally fine.

Also, for the OP… I remember reading you said durring downloads you would get really high cpu temps… Are you running windows? If so have you used the Ryzen Balanced power plan for the most updated AMD drivers? At idle have you used Ryzen Master to see if cores are going “Idle” (actually says that) with as many background processes off as possible? I know theres ways to force this etc, but a performance setting and some windows power settings can make even small loads make Ryzen CPUs temps jump. Also, ryzen master may have a diffrent temp reading than what your using… Ryzen (at least some chips) reported 5 to 10C more on other programs… I dont know if this still is so or not but was supposed to help as a safety for the chips.

@MazeFrame had a good idea too, a little more fresh air might not be a bad thing to try. Quick easy way to lower some internal temps.

Oh, I understand where you were coming from, just from recent personal experience with a 3080Ti myself, GPU temps where up to 18C higher with the AIO as intake. Switched to top exhaust and all was well.

I’ll be changing all of my fans to Noctua Industrial 2,000 RPM variants soon.

Balanced Power Plan is definitely a good idea if it’s not already set. Undervolting could help some, too, as previously suggested.

Thank you very much for the suggestions!

I’m definitely picky when it comes to temps, haha. Always have been.

@HEXiT I havent messed with my soc volts. Dont think I’m brave enough to mess with that yet but thanks for the info!

@MorbidEden Getting better fans may be a good idea. The stock fans on the radiator don’t seem all that great. I already have some Noctua fans for the front so I may try the Be Quiets. Thanks for the suggestion!

@MazeFrame Sounds like a good idea spinning the rear fan for intake, though there is no screen in the back so I imagine a lot of crap would get in my case easier though.

@HaaStyleCat I guess I have big dreams for a cooler CPU/ system, haha. I don’t know enough about custom loops to try those yet. The old Ryzens use to not be optimized for Windows so it needed a special power plan. I guess current Windows is better optimized for Ryzens so the latest chipset drivers took out the power plan. So right now, Im just on Windows Balanced.

though there is no screen in the back so I imagine a lot of crap would get in my case easier though.

Wire mesh filters can be found for relatively cheap. One example:
https://www.digikey.de/en/products/detail/qualtek/06450-B/1164215

What all of this looks to me is a spin up time too long for your fans. That means that burst loads are not taken into consideration by your motherboard in order to speed up the fans. That way you’re seeing constantly high temperatures but the fans/pump are not keeping up with the load. Worth taking a look if there’s anything like that in the fan configuration.

I also saw you using Core Temp and that could also be the program not reading correctly the data off of the CPU. Try HWiNFO64 and see if temperatures are correctly displayed or not, just to make sure.

I see that your cooler is new revision of the Arctic Liquid Freezer so, if you didn’t already, there’s the option to use the offset mount for AMD CPUs that should help with the heat transfer: 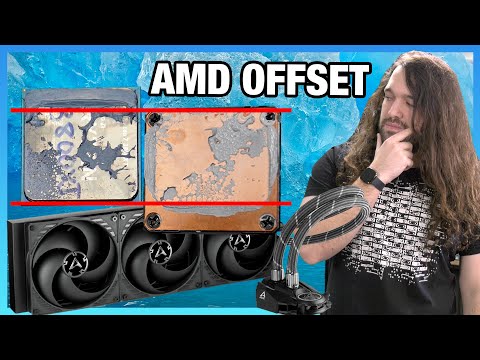 Last but not least you can resort to PBO + undervolting to keep lower temperatures. This is a great tutorial on how to go about it: Ryzen 5000 Undervolting with PBO2 – Absolutely Worth Doing - YouTube