Hello there! Just wondering if anyone knows why my PC cooler has failed me. I have an AMD fx-8320 that is usually clocked at 4.8ghz at around 1.5 volts. Been rock solid for about 2 years now. PC had been sitting for about two months as I was on holiday and just today I got to work editing some projects in Adobe premiere pro. Upon exporting my PC shut down. I loaded up HWmonitor and tried to export again. Temp hit 80c+ and then the pc shut down. Overheating! So I opened up my case and tried again. Here is the clip of the pc attempting to export the video. https://youtu.be/heOQpaX2tL4 the thermaltake water 3.0 seems to be making an odd noise, the fans spin up, and then it overheats and shuts down. What do I do? Want to fix it soon and don't want to buy another expensive water cooler for it as it's an old system. Any help would be appreciated as this is my first liquid cooler so I don't know what is failing. Thanks!!

Do you have another cooler around just to see if you can get it to work? That is what I would try.

Have you tried replacing the thermal compound?

I don't have any other coolers for it no. Hoping someone will be able to tell me if it's the pump or maybe some air is inside the cooling system.

Not yet! I'm hoping someone has some insight into if the cooler is just dead or not. If I don't get any concrete answers I'll definitely be putting on some new paste tomorrow and see what the results are.

Change the thermal paste... It's a few minutes work.
Then test the system again.
It's entirely possible the pump is dead, or it could be just really dry thermal paste.
Nobody can just tell you "it's that issue 100%".

Can you hear the pump running? Thermaltake is not exactly known for reliability when it comes to watercooling (not sure if Thermaltake uses Asetek pumps like 200% of all the other AIOs). You already mentioned a "odd noise", can you just get the fans off and just try starting the pump? Does it do anyhting? You can also unplug everything else for the test just so you can hear it more clearly.

The pump is in the block on the CPU

It might be the pump died and the water is just taking its time to heat up.

I am just guessing but maybe the water cooler doesn't have enough water inside its unit.

That is a possibility, even though a very unlikely one. Unless there's a leak (which you would see) it's not really a thing. Water doesn't just evaporate through the plastic tubing.

The pump is clearly rattling so maybe something in it is broken. Take off the pump/CPU block and give it a gentle shake to ear if something is too loose in there. When you put it back toghether load the default frequency and voltages and see what happens. If it still shuts down that fast (or even takes a bit longer, doesen't matter) the cooler is broken for sure.

That is a possibility, even though a very unlikely one. Unless there's a leak (which you would see) it's not really a thing. Water doesn't just evaporate through the plastic tubing.

I thought the biggest advantage a custom water loop had over the all in one unit system was a custom loop doesn't lose water do to evaporation. Also aren't the water cooling system that the original poster has suppose to be replaced every 2 years.

They last longer than that. Corsair's AIOs come with a five year warranty for what it's worth.

Thanks everyone for all the insight! I've applied new thermal paste and at my OC settings it still turned off. I have loaded the defaults for everything and it seems to still be running quite warm but it has not turned off. This is pc at idle at stock settings. 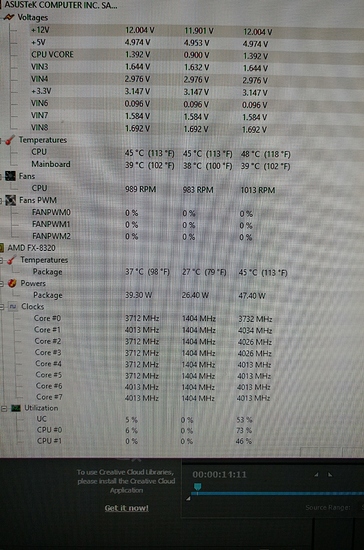 20170716_173207.jpg2358x3556 2.76 MB
Sorry for taking pictures with my phone I just wasn't sure if the pc was going to be stable enough to upload screen caps and what not. I will do some more stress testing soon but it seems to be okay just running warm. What would be the cause of my OC no longer working? Ambient temps are always consistent. Could my CPU be nearing the end of its life after running so much voltage through it for 2+ years? Unfortunately I don't have any other coolers handy to test out but I will report back after more stress testing. Thanks for all the help everyone.
TheCaveman July 17, 2017, 12:23am #14

Touch the top of the cpu pump/block combo while the pc is running and feel for a vibration. You should feel something since the pump would make the block vibrate slightly. Also, feel the tubes. If the rubber tubes are hot, then the water inside isn't circulating because the pump isn't moving any water.

Tbh this really seems like a case of a dead pump looking at it. Thermal paste shouldn't completely fail to transfer heat after just two years...

Those asetek water coolers only last for so long before the water block plugs or the coolant evaporates through the tubes tho that is real slow. About 5 years is the average life for what i have witnessed.

Seems you posted the same image twice there, how about the image with the numbers for the heated state. 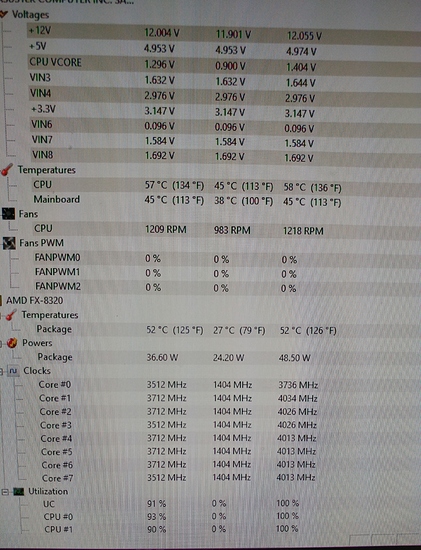 Haha! That's true. Although for what it's worth it's been rock solid until now with the 360mm radiatior.