I am having issues with my gaming setup. So first of all my setup is that I have an ultra-wide 2560x1080 monitor which is set to be primary by default and I do everything except gaming on this monitor. Then I also have a 4k TV that I use to play games. Now two issues already pop up because of this setup. 1. since the displays are of different aspect ratio I cant just mirror the two displays so one solution is to disable the TV when I’m using the monitor and then disable the monitor and enable the TV when gaming this will also fix the following issue but will create more issue that I will go into later. The second immediate issue is that games display on the primary monitor and even if I use a kwin window rule they will still use only the resolutions of the monitor. This is where the disabling of the display that’s not in use comes into play I created a script that will run with game mode that will handle all of that. Now, this causes some other issues where it can cause glitching in the system and other weird things to see the picture, for example 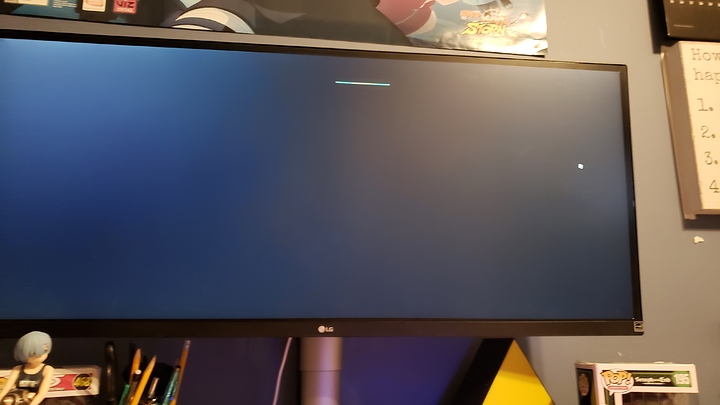 20200321_222858.jpg4032×2268 1.88 MB
, this happened when I exited the game and it tried to enable the monitor. Another solution would be to run the steam-os compositor on a separate tty and have that tty linked to the TV and on my main tty I have KDE running on my monitor. This worked great for a while but then I need to mess with steams udev rules to get a certain controller working and that broke this setup somehow now the separate steam can’t access connected controllers. so anyone has any ideas on how I can fix any of these issues and get a working game setup? one thing that I am thinking of doing is changing my scripts instead of disabling the unused display just switch which display is primary and then setting in NVIDIA settings a config where the monitor is just the top left portion of the TV. a couple of problems with this though although the problems are more minor this time. 1. wallpapers will stretch to the size of the TV so I will only see the top left corner of my wallpaper in my monitor. 2. Same story with the login screen and any startup animations. the login screen can be a little problematic as that makes switching users or sessions difficult, but the rest is purely cosmetic. Still, it would be nice to be able to have a working and nice looking gaming setup.
mihawk90 March 22, 2020, 8:33pm #2

I used to do the whole disable-enable-display-switching when I first connected my TV to the PC, but I don’t anymore because frankly it is just too much hassle. X11 (or KDE, whatever is responsible, don’t really care anymore at this point) doesn’t always remember the display position, and with it the Wallpaper(s) and Widgets. And setting them up each time gets really annoying really fast especially with 4 monitors at 3 different sizes (1x 1440x900, 2x 2560x1440, 1x 3840x2160) and different heights of the monitors.

So eventually I just let the TV enabled even when it is off. That does create a “ghost” display in X11 (i.e. it renders a desktop that isn’t actually output), which in turn also creates some issues with certain programs that tend to use the TV desktop to open windows for some reason.

For the most part though it works “OK(-ish

)”, even though it is far from optimal.

Linux Multi-Monitor is a shit show to be frank and AFAIK there’s not really much to be done about it except hoping that eventually Wayland will make that situation better.

One of the issues I still have is that my display arrangement gets f**ked up half the time when just turning monitors (including the TV) on or off. Even though it renders the desktop all the time (as pointed out above) it seems to … IDK how to describe it… “unregister” the Display and then reenable it again when turning a display back on. Turning it off does nothing, only turning it on makes all the displays flicker and make windows jump around as if it were detecting a new monitor. It’s really annoying and this also sometimes messes with the arrengement. The only way to “fix” this was a sed command I manually trigger via a .desktop file in the application launcher that rewrites the KDE Display configuration and restarts KDE. It’s annoying as hell, but it works currently.

Oh and Refresh rates are also changed seemingly at random on my displays, without notice… which is nice.

The closest I have gotten to a an ideal setup is to install the steamos compositor and run that in a separate tty it will automatically only display on my TV then I can switch to the tty running kde at it would switch to my monitor no issues going back and forth because as far as the system was concerned each tty only had one display. Unfortunately I later had to do some tweaks to the udev rule and that made it so I can’t access my controllers from a separate tty even reverting those rules doesn’t fix it