Hello I wanted to install Ubuntu gnome parallel to windows 10 to test it and hopefully change to it later on.
So I installed it with a cd choos to install parallel to windows but then near the end i got a error see picture.
I chose to install it on sda1 because I did not know what to do.
I searched a little and found out that I have to run Ubuntu on the live cd an then configure my Grub somehow. I would be happy if somebody can help me there. What information do I have to post so smebody can help me fix it or has somebody a documentation on how to solve this? 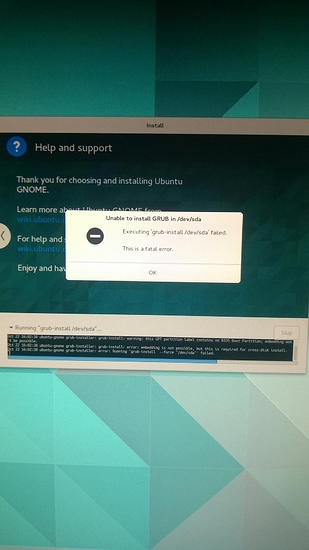 Thats a problem either with the iso you burned/mounted, the installer itself, or your USB (if you are using one). I get this a lot. It's why I install from disks.

I uesd the same installation CD to install Gnome on another Pc and it worked. There has to be sth wrong with the parrallel installation setup I just dont know what it is

Do you select "install Ubuntu" or "Try ubuntu"

if its ubuntu 15.10, i've been running into a similar issue in that case, BE CAREFUL you might just nuke a windows partition into RAW.

This is kind of a stupid question. But does your BIOS have secure boot? If so disable it. If your PC is a Lenovo be sure to disable Lenovo's fast boot.

Also what works for me sometimes when a Linux OS wont install is I click on "try os" and then once inside I click on the installer instead of going straight to the install wizard.

I first tried it and installed it from there i turned all the extra boot stuff off like the fast boot.
And its not a lenovo. Should i post any more info from the system?

There should be log files under /var/log/installer or /var/log. Post the installer one, it should be called installer or should have install in its name somewhere. Also look for and post a file called syslog After you get that error, open the file copy its contents and post it.

A recent issue that can come up is with efi motherboards, live cds sometimes have two modes efi and non-efi, when you get the computers boot select menu make sure it says "uefi: ubuntu gnome" (or whatever its called)

So I just deactivated the windows Sdd and installed it again seems to be working now.

Hmm, all i did was install windows 10 first, then install ubuntu, then run boot-repair. everything was just dandy afterwards.