Toms Hardware picked up on the technical feat when Nick Shih, a renowned overclocker that has set numerous world records and has Signature series motherboards from ASRock. Shih is well known for setting many world records with the z77 OC Formula and X299 OC Formula. These are just a few of his signature motherboards. Shih paired an Intel Core i9-7900X with eight SK Hynix 128GB LRDIMM (load-reduced DIMM) modules. Considering we were told that the X299 chipset doesn’t support EEC (error-correcting code) memory, much less LRDIMMs. It’s unknown what kind of magic Shih had to use to get the memory to work on the ASRock X299 Taichi CLX. . 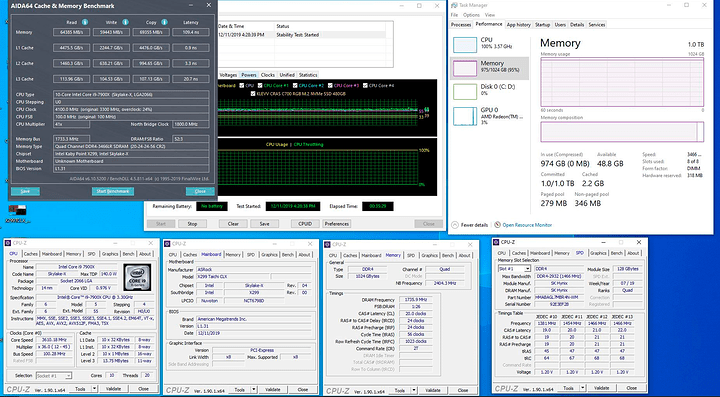 I really hope Asrock releases a BIOS update that happens to support Reg. ECC DIMMS. LRDIMM is kinda meh IMO, yeah you can get huge capacity, but it is still expensive to do so AND you take a perfomance hit.
Reg. DIMMS are large enough usually, plus the moderate capacity ones are not overly expensive.

It’s unknown what kind of magic Shih had to use to get the memory to work on the ASRock X299 Taichi CLX. .

He probably just used a non public bios on an ES sample board.
The used cpu might also have been an ES sample as well.
There isn´t that much magic going on likely.

Doesn’t have to be.

ASRock has been known to implement a very “bare” BIOS meaning they won’t block memory compatibility that is present in hardware.

The 7900X is a SKU where for some reason Intel forgot (?) to disable RDIMM support in its memory controller like in all (?) the other Skylake-X parts - but ECC isn’t enabled.