I have been keeping an eye in these for a while now and they popped up as a vote on mass drop. I would love to see this succeed because the keyboard is cool and it would be really handy as a portable mech keyboard for work. 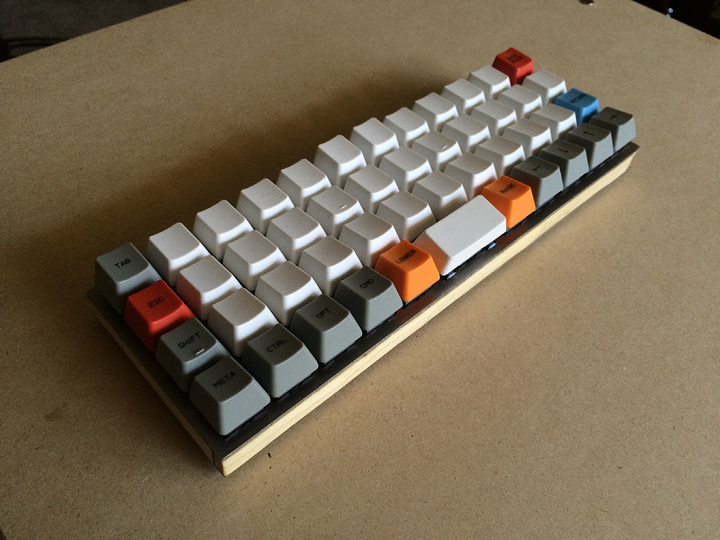 Massdrop is an online community for enthusiasts. Whether you're an audiophile, quilter, backpacker, or style maven, you can connect with others, discuss your interests and favorite products, and save on those products when you buy together.

There is also the Atomic, the bigger version of the Planck, in this drop for voting if you like a few more keys.

I quite like the Atomic or Assembly Process keyboards, I do not understand why people are attracted to the miss matching colour schemes like this board

I would prefer the planck because of its symmetry.

The Assembly Process ones are just the Planck and Atomic pre built and done. The regular Planck and Atomic come as kits to assemble yourself however you like. As far as I know you don't get the keycaps in this specific colours, it is all to your personal taste. That image is just an example of a finished one.

Yes and how small it is. I really like it. One way or another I will have one.

Oh true? Thats cool, so its like the Infinity keyboard?

Yes. This started a a projects on Deskthority I think. And is to this stage now. Not sure if the PCB is available yet. I have not checked back in a few weeks. It was all hand wired before this and looked really good. The PCB make it a little more expensive but also easier to build. Either way I really want one and the keys are all stable pCB or not as the switches are plate mount.

Take a.look around the website it does not have to be all at once.http://ortholinearkeyboards.com/

And there are many options.

I find the planck really interesting. Currently on a poker 2 and the ortholinear would be nice for stenotype with plover. The fully programmable layers are also nice for colemak, dvorak, et al.

Currently looking at the planck but also waiting to see what the Pok3r 3 will offer and the textblade is also catching my eye.

Does anyone know if the planck frame will fit in a standard 60% case.? I have a spare plastic poker case to fill.

Oh it does not fit in a case, it is self contained. You can make nicer case if you like but as standard it is either an open bottom on a plate with stand offs to hold the switch plate up or a formed metal bottom to cover the sides. After that you can make a wooden case or 3d print one or what every you like as long as you are able to do it.

Bump.for half way there. If there is any interest around here.