Hello dear community! I know lately I’ve been asking many questions but there’s till an open one for me that I can’t get decided on: what case to get for my new ITX build.
I was looking for a small option and bought a Silverstone RVZ03. It’s very flawed, panels don’t fit very well and the just RGB version lacks a controller to change around the RGB strip on the front so I returned it (it only has a proprietary connector with a SATA adapter to power it a single colour. A box is needed to break the RGB to a standard 12V plug that goes into the motherboard).

While I was browsing Amazon I found a decent looking ITX test bench that costs 50€. It’s made of five alluminum beams, plexi mount for a PSU and some random metal and plastic pieces to put it together and screw things on it. I think it would look cool with my system (MSI 2070 Super Gaming X, Asus Crosshair VIII Impact, 3700X, 16GB G.Skill 3600 C18, stock AMD cooler). But I’m worried that it might be too “dangerous” having everything exposed like that.
I don’t have pets or kids around that might poke at it and make a mess.

That being said, is there anyone among you that has a setup with an open air test bench and uses it every day? How’s your experience been so far? Would you switch to a case?

I don’t have pets or kids around that might poke at it and make a mess.

So your main issue is dust then… You may have to dedicate a day of the week for cleaning the PC.

What bothers me most about this is the structural rigidity of it. Those plexy and random parts here and there, I doubt they will last long…
You spent so much money on that motherboard and those parts… Just get a decent case…

Just get a decent case…

I can’t, it’s insane! The maximum size case I was willing to buy is a Lian Li TU150 but it’s not available! Or if it is it’s from shady sites that sell it a price too good to be true.
I don’t know what case to buy, there’s basically zero choice on Amazon in my country. If you have any suggestions I’m very open to them!

I didn’t want to cheap out on the case, not at all. I just thought it might’ve looked cool on the desk, knowing I’d need to dust it quite often.

I didn’t want to cheap out on the case, not at all. I just thought it might’ve looked cool on the desk, knowing I’d need to dust it quite often. 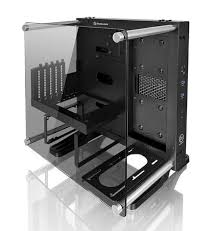 It’s basically an open test bench that can stand up, mount to a wall or sit on it’s flat side like a proper test bench with a glass on top.

If you are set on test bench at least check on one with more solid build. I am really worried about those plexi panels… On the other side my case have absolutely scratchless plexi window after 6 years and a bunch of parts upgrades, so yeah…
Up to you really. If it looks good to you just go for it.

Man that’s pretty big, I’m trying to build an ITX computer that I can fit on my desk without taking up so much space. I don’t think Thermaltake makes an ITX version of it.

If I was making an ATX build I would’ve cosidered it for sure!

I don’t think Thermaltake makes an ITX version of it.

P1 is the ITX version of it… P3 and P5 are the full ATX versions.

I’m sorry, I looked at the pic you posted without looking it up on the web.

If you are not really in a rush you can check other stores as well and hold on a bit to see if the case situation changes. I mean if there isn’t anything on the market you really want to have.

What bothers me most about this is the structural rigidity of it. Those plexy and random parts here and there, I doubt they will last long…

I would not worry about the alu extrusions and corner pieces. Tha acryl on the other hand, I am with you on the “why would you do that to yourself?”-boat.

Yeah, it’s really looking like it’s too good to be true. Also since I’m at page 28 of my Amazon search for “mini ITX case” I’m veering more and more towards an NZXT H210 just to get out of all the hassles of the RVZ03 and how badly it’s made.

I mean, you could totaly go for alu extrusions (like the one testbench with the acryl accessories) and DIY your own case.
There are inserts for the extrusions to hold panels without giving a “toaster oven” esthetic. 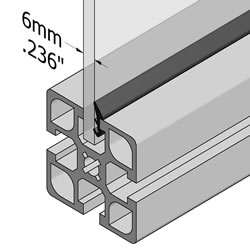 If you want something super tiny I’d be leaning towards a test bench also. Working inside most of the smaller ITX cases will make you think they were designed by the Marquis De Sade.

Maybe get something like the A4 Mini ITX test bench, and then enclose it steel mesh if you want a little extra protection from dropping things on it or whatever. You generally don’t need specialized tools to work with aluminum, so if you need to drill a few holes for pop rivets to hold down the mesh, or attach some of those supports MazeFrame mentioned, then that should be pretty easy.

You’ll pay for it both monetarily, and with time, but if none of the pre-fab options on the market look good to you, then something semi-custom might be your only option.

You thought me something new, thanks!

It might get here in a month, but it’s an interesting alternative. Thanks (again!)

You generally don’t need specialized tools to work with aluminum

I’ve bend aluminium on the edge of tables scoring it with a blade to make cleaner bends, so I think I can make what you said. Also I really enjoy DIYing stuff.

In the end the summer heat and just wanting to get over with my build made me buy an NZXT H210 hoping it would be a decent case. Thanks for the suggestions and the help!

H210 in my book have one bad thing and that is a bad thing with 99% of the cases nowadays and that’s the roof. Other than that it’s really good case. NZXT usually have great build quality and I really like the styling of the entire new H line of cases.
Congrats and share pictures whenever you get your hands on it.

Yeah, that’s not great but I won’t be doing any watercooling so it’s fine. After having to bang closed the side panel on the RVZ03 while seeing all the other parts on the exterior shift I just said “screw it, I’ll get something standard”.
This also rules out every possible issues with PCIe risers.

I will! I also think I’ll make one post with the whole build put together.

I won’t be doing any watercooling

It’s really about the looks for me. Not really the watercooling.