I have two Opteron 6220’s which I bought from ebay. I am ready to build a cheap server and I see that the cpus are not the same despite being the same model. Is this because one is damaged?

You can see some of the, whatever you call them, are not there on one of the cpus: 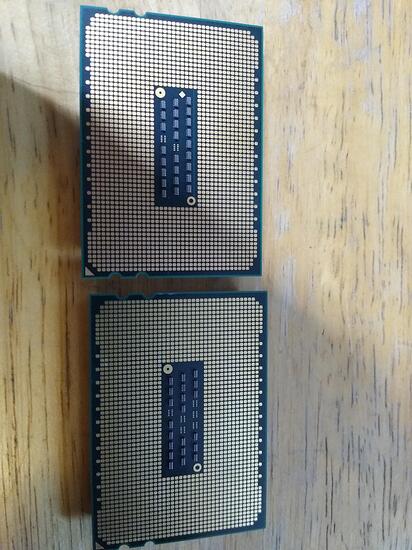 they are called pads…

I would personally not worry about the differences

So they’re not related to the actual functioning of the cpu?

You can see some of the, whatever you call them, are not there on one of the cpus:

I assume you’re talking about the chips in the center? They may be just capacitors which may vary in placement and quantity for a variety of reasons. But revision of CPU would be my guess. Maybe AMD found they didn’t need as many or maybe they place components according to the particular chip’s needs. From the photos, it doesn’t appear any had been knocked off so I wouldn’t worry too much about it.

Thank you both for your help.

if the pad layout is different it may mean your heat-plate is the only thing on the cpu is from a 6220. (ebay scam)
as its the same socket it shouldn’t be an issue sticking them in and turning them on to see what they actually are
…
they could also be revisions of the same chip as said. lets hope so

If the capacitor pads are present & clean, then it’s almost certainly just a different capacitor configuration, not damage.