Hey there. I'm looking to hack my old xbox but i need a PC with old hardware to be able to do it. Please do not suggest alternatives :) I need a motherboard with 2 ide connectors, not really bothered about anything else on the motherboard. Also need ram to go with the mobo and a cpu of course aswell as a ide optical drive(doesnt have to be anything fancy). speed is of no concern, neither is sata connectivity. this pc will not be used for anything other than unlocking a ide hdd. im in the uk so uk websites only please :) 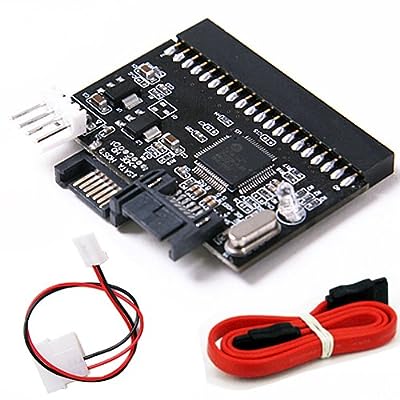 With this adapter you can convert IDE to SATA and SATA to IDE: it's bidirectional! It can be plugged into your drives or your motherboard. Can be used to upgrade an older computer, optical drive, or h ...

This ain't google plus

I just did :P LOL that and your response covered it man.

Is there any reason you can upgrade the system?

@bluealphagamer i have tried converters like this and it didn't work and the instructable i was following clearly stated that ide ports on motherboard were required :(

You should be able to find quite cheap retired workstations on ebay, something like a Dell Optiplex?
Not too sure if they have 2 IDE connectors or not but it's worth a dig through eBay either way.

I wouldn't build a computer, just grab some old Pentium 4 out of a dumpster.
People should be giving them away for free, most end up in recycling.

What kind of hack? Just a custom OS to load games from?

You can only softmod the OS

Or use xecuter mod chips that have to be installed on the xbox motherboard.

softmod the os? what does that allow you to do?

I feel as though you should know , you HAVE to mod the original xbox in very specific ways.

You cannot treat it like a normal computer , you can't even copy the original hard drive and swap it out with a different one as the motherboard and drive are locked together. Not without mod chips.

You can't even take two identical xboxs and switch the hard drives between them.

You have to do your homework on it. They are very very easy to brick if you don't do it correctly. And yes I said BRICK. If you screw up any step and the xbox loses it's original drive software without being modded , the board becomes useless and isn't really fixable.