so I built my father in law a new computer. he was using a really old dell from the early 2000's. he wants to transfer everything from the Dell hdd to his new computer. what kind of enclosure would I need? http://www.imgur.com/a/cFPgv

EDIT; that was a disk drive, too fixed on the fact it was a hdd. went to pull out the real hdd out.

I believe it takes an IDE cable and molex power, if that's what you're asking.
You can easily find cheapo adapters from the above to USB on amazon, ebay etc.

it's what it looks like. the whole enclosure of this disk threw me way off.

I haven't used one before, but something like this should work. 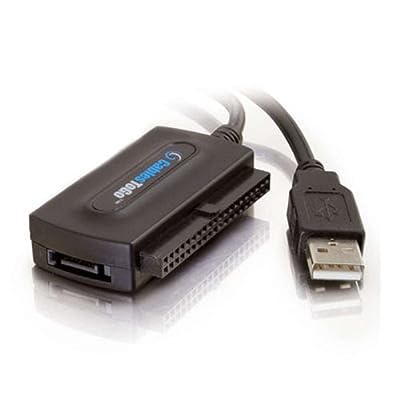 Turn any IDE or SATA drive into a convenient external drive! Simply connect one IDE/ATAPI or SATA-based mass storage device through a USB port to easily transfer files from a computer or laptop, backu ...

that looks like it would be a mess; ide to sata, to wall outlet, then usb. or is it one or the other?

It's a USB hub thing that has an IDE and SATA connector, and a power supply that can give molex or SATA power.
lol it comes with a little baby SATA cable.

whoops, i take back what i just said then. if microcenter is open tomorrow, will find something like this and do it to the other 3 ide hdd's i have to transfer over.

That imgur link shows a floppy disk drive, not a hard drive.

...not to poop on your party but thats a floppy drive not an IDE hard drive, so I doubt you'll be able to get much off that...

For the record I never said it was a HDD. ;P
brainfart

You can transfer files in easier way without additional expenses (getting adapters). You probably have flash memory (thumb stick etc.), if that Dell PC is operational, simply start it, and transfer files on USB flash memory, no need to pull out anything.

That Dell PC probably have USB connection, it might take time (depending on speed) and few "parts" in transfer procedure (depending on HDD size and flash memory size), but you can do the job that way.

Or even better, if you have spare UTP cable (LAN cable), simply connect them and use file sharing to transfer files.

it would take longer to do that kind of transfer. they are 15 year old computers, the cpu's would make the transfer take forever.

Don't forget that up to 15 years old CPU's are Pentium IV and Athlon XP's, they have no problem with transfering speeds of current time USB thumb drives. Only limiting factor could be lack of USB 2.0 connection, but, it would take at max up to a few hours, still much faster and cheaper then hustle with getting adapters and so on.

Ofc, if he use LAN, that's for sure speed of up to 12MB/s, and it is fast enough for this particular case/purpose.

so after ripping out all the drives and throwing them in a enclosure. the transfers for all drives took no longer than 2 hours alltogerher. simple usb 2.0 i picked up from microcenter. I am sure if it was usb 3.0, it would have cut down transfer times down by a large amount.