on my redacted vehicle I use as a commuter the blower only ever worked on the max setting since I bought it off facebook from some junkie who said he needed the money to keep from getting sent to jail.
Well with summer coming up I decided this annoys me enough to do a thing.

I got a resistor pack for it this did not work.

I checking with my meter the power pins leading to the resistor module are powered when they should be depending on the blower switch position and nothing but the ground pin is connected to ground. I checked the resistance on each pin of the resistor pack the replacement matches the original fairly close.

Soo my guess is the blower motor itself is in poor enough shape it wont switch on unless powered on full, does that make sense to those who have actually worked on this issue b4?

What i’m tempted to do is purchase a generic pwm module and wire this to the motor. Using pulse width modulation at full voltage rather than a resistive voltage drop it should in theory keep the old blower motor from stalling at lower speeds while also giving me the benefit of very fine tuned control over the blower speed, what does everybody think?

Definitely go for a PWM controller. The resistor approach is very poor in efficiency.
I would also suggest checking up the brushes on the motor, because from my experience with brushed blowers in cars, once they get worn out, they tend to only work when they get full power. At least they need more power for the initial start (to start rotating). Not even PWM will be of help much in that case. And it will only get worse, to the point where it only starts by mecanical impulse (start rotation by hand).

Frankly, you should go get a new or refurbished blower and search for the original speed variation circuitry from some junkyard, if it’s cheap enough (close to free). If not and you feel like it, get a PWM module. But be aware that bad (cheap, with no filtering) PWM modules might inject noise into your electricals ( radio or even the ECUs) .

I’m sure there’s an easier way to do this.

But for some reason I’m now thinking about a microcontroller and a mosfet (<$5 in parts) + linear regulator to power the uC + perhaps a sensor and some kind of, tactile control if you don’t want to use a smartphone to control it. (another <$5)

Any chance you could have a closer look at the motor?

Well the pwn approach is pretty easy the modules cost like $6, there like $2 if your willing to wait for the slow boat from china then you just screw in like 4 wires and mount the pot.
. I can add shielding/smoothing if necessary I expect it will be okay though the computer is already pretty well protected and I don’t really listen to the radio.

The original speed variation circuitry is the resistor pack thats how they do it from factory
Its called a resistor pack I assume its it has nothing more complex in it but since its in a block of resin hard to say what’s in there for sure if you check the pins that get powered based on what setting you use each has a certain resistance that would make sense for an appropriate voltage drop.

as far as replacing or rebuilding the motor goes well since it’s not really essential and this car is just for getting to work and back I kinda can’t really be bothered till it dies. PWM is the cheap and lazy option that should work even if I have incorrectly diagnosed the issue since it will mostly bypass the original circuit with the plus is using less power and more controll 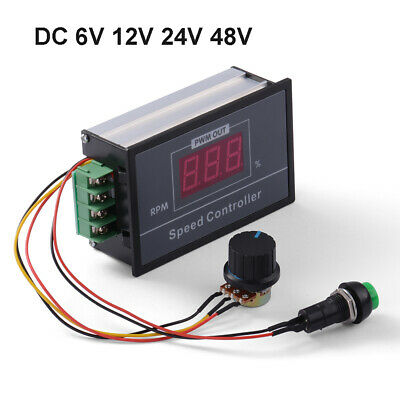 Features: Speed controller is made with high quality circuit board which ensures a longer service life. This simple and easy-to-use DC motor speed controller has an stable performance. Designed with a digital display that shows the rate...

It worked fine, I took apart my dash removed the hvac control panel took out the speed switcher switch set it to max plugged it back in and shoved it back behind where the panel mounts so its permanently on high. I then jammed a potentiometer into the switches hole, you can call it a friction fit. soldered to the pot was old speaker wire I found in my basement.

When getting ready to connect the controller to the blower I found out the connector for it gets quite hot and was even just a little melted. Somehow I missed this before, there is a good chance the added resistance from this damaged connector was the cause of my blower not being able to run on lower settings. No way am I gonna take my dash apart again to find out. I cut off both ends of the blower connectors and put the wires into the screw terminal of the motor controller.

I perhaps should of wired a switch so I could have a true off state but eh I just have to remember to manually turn off the a/c when I have the blower off so the compressor does not continually run should cause no other issues… I think is that true?

I choose a nice pot with a decisive click for all the way off to control the controller, the controller produces 5 volts for control settings the pots job is to drop the voltage so whatever gets returned is your setting the issue there is at the time I forgot that zero volts is max and 5 is the lowest so the controls work the opposite of what would be intuitive, overall a good result.

one minor flaw in my setup it seems the controller I purchased has overheat protection bulit in so if my car is sitting in direct sun and quite hot I need to open the windows and let it cool a bit b4 the blower will stay on but i only have to do this a little bit. I suspect if I where to mount the controller where the floor vents hit it this would be solved

I agree, it would probably be solved with direct airflow.

If you have a trunk, you could reroute it there since they usually stay quiet a bit cooler.

well on second thought thats short sighted for winter but there are several solutions, I may or may not bother to do anything though.
Off the top of my head adding a heatsink or just mounting it too a chunky metal bit on the car would probably be enough to overcome

Something to keep in mind for those who might do similar.
I mean when you get into a hot car who doesn’t roll the windows down for a bit anyway so its not really a huge issue

here we go one more time I am a bit annoyed again so this ma plan.

There are four full battery powered thin low current wires that originally went into the “resistor pack” they are only powered individually when position 1,2,3 or 4 is selected. I plan to join these and use them to close the transistor. I am then gonna pull power from the fuse box thats convenenty right next to the motor and run that through the transistor so when 1,2,3 or 4 is not selected the connection will break. I will then run that through the controller then to the blower.

For position 5 the power will come straight to the blower through the original circuit. I think i’ll add a diode to the output of the controller and resistor pack just in case it could get fired from power going through the wrong way when the other is powered but i’m not 100% sure that’s necessary.

The concept is to make it so position 5 bypasses the controller and 1-4 go through it.