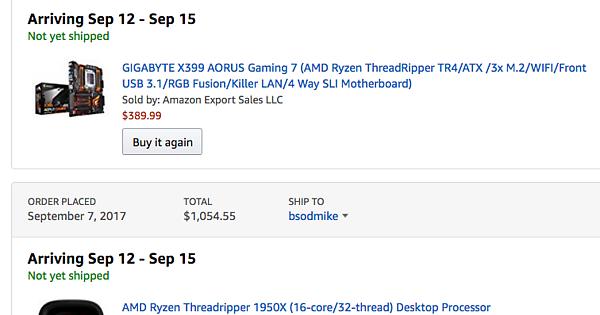 Utterly excited to bits. Just got the bare essentials - I’ll be cannibalising from one of my boxes, to get it booted and do some initial stability testing.

@wendell You know you are to blame

I really need to hit the lottery already

Well good luck. May your virtual machines be blessed. xD

Good luck and enjoy it.

I’m trying to resist buying one myself.

Seems to be a common thing. GN was saying that several of the OEMs were saying X399/TR is outselling X299 by nearly 5:1.

If I made money off my home setup I’d probably be able to justify it… at least to myself.

As it is, not enough disposable income, so I’ll have to live with my 1700X (that I am otherwise very happy with).

Final form? What you talking bout Willis? Kudos dude! The force runs strong with you.

GN was saying that several of the OEMs were saying X399/TR is outselling X299 by nearly 5:1.

That is astounding and very welcome. I was sure that blind fanboism and idiocy would have Intel still steamrolling a path to the bank, very happy to see people actually use sense when it comes to High End DeskTop needs and the Pros/Cons of each vendor.

Was something nuts like TR sold more in the first week than X299 did in a month.

Thanks to everyone for your fantastic comments!!

@Zibob honestly, since adding my recent systems, I’ve been bit of a Intel/Asus ‘whore’ (LOL); What can I say, there just aren’t any surprises in a new build. Since a year ago, I’ve built 4 Intel-based systems, all running Linux and just didn’t have any issues.

It was a tough call, but ultimately two things pushed me towards Threadripper. (1) the 16 cores/32 threads, at 3.7Ghz (Full load) / 64 PCIe lanes / ECC support (2) the FANTASTIC content by @wendell that allows someone line me (stranded on an island south of India, with 'ner a decent Tech store in sight; sure we have like 1 main PC mall in the heart of Colombo, but they all stock low-end components. Anything over $2-400 and you’ll have to order it in and pay ‘agent’ luxury tax) to go out and build a new system with some level of confidence it’s not going to go tits up.

And just cause it’s so freaking cool. Like, the ‘coolest’ thing in recent-computing history that I could think of.

Mind you guys, I started out on an Intel 286, then 386DX. I’ve had original Pentium, then Pentium II.
Later on couple Pentium 4s, (plus other systems which I can’t recall) including an Intel Pentium 4 3.0GHz 800MHZ FSB during my Uni years.

From 2001/2-ish though, the worst thing possible happened. I converted to Mac.
I’ve been solely running Mac until August 2016, which was my return to the PC master race.

An AMD Athlon 64 years later. Intel Core 2 Duo (I have a dead CPU on my desk right now…). So from an enthusiast standpoint, this stuff is just cocaine

And just cause it’s so freaking cool. Like, the ‘coolest’ thing in recent-computing history that I could think of.

That is basically why it exists too. It never was planned to be a thing. Some engineers at AMD were just like “Let’s make something really awesome with this.” They worked on it in secret in their spare time, just for them, before it got the green light to be released to the public way later

…and we are off to the races. ETA over a week post-Customs shenanigans. Stay tuned… 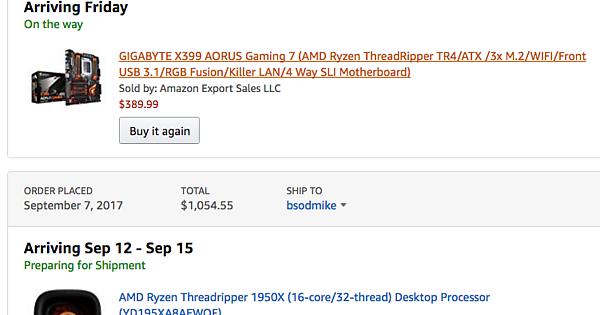 Now Im triggered… haha jk but seriously. on the intel side of things ASROCK was night and day compared to asus when overclocking… I was using the OC formula and trouncing my friends on the ROG side of things… though a friend of mine with a gigabyte SOC force edged me out which made me salty

Congrats on your new build…! threadripper is insane

AMD’s best decision of this entire new platform. LOL i bet those engineers might be getting some serious kudos

My Asus Zenith Extreme was working within expected parameters. Memory using DCOP was posting at 3066 and not rated speed of 3200. Considering dual rank 16GB sticks, 64GB total, I am not complaining as I haven’t even tried to tweak.

Problem was Threadripper 1950X. On idle it was drawing on average 1.46 to 1.502 volts. RMA, still waiting on replacement. As I have not heard of this issue by another user I consider it to be a unique and unlucky. I am going mad waiting for replacement. Once you have experienced Threadripper, there is NO going back.

You will love your choice.

And to be fair that was perfectly reasonable, Intel simply had the better processors, but now that has changed and the fear was that no one would be aware of AMD any more. Glad to see people actually keep their options open and look rather than just keep on doing the same old because there is no way AMD could do the unthinkable and actually make a good processor.

Hi all - well the parts arrived from Amazon, and with far less pain than I originally assumed, as they ship via DHL using a ‘duty paid’ option - super neat!

I immediately set about taking the tempered glass off my 570X Corsair case and getting the bits installed. 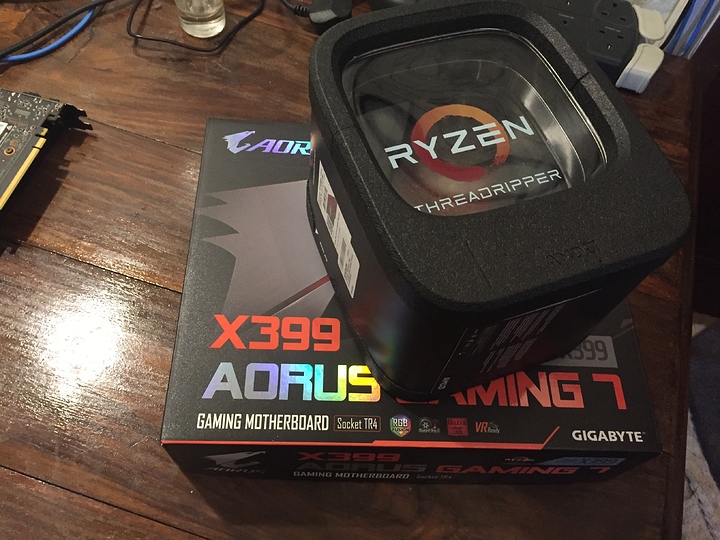 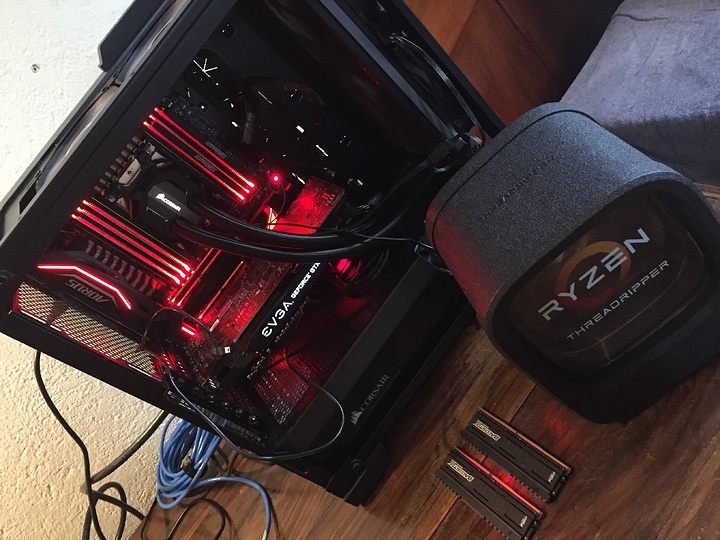 I’m tad underwhelmed by the Gigabyte UEFI, perhaps given that I’ve come to really enjoy Asus’s UEFI. It just feels somewhat limited, as if it is missing menus and options? Running the stock ‘F1’ BIOS on the Gigabyte X399 board. 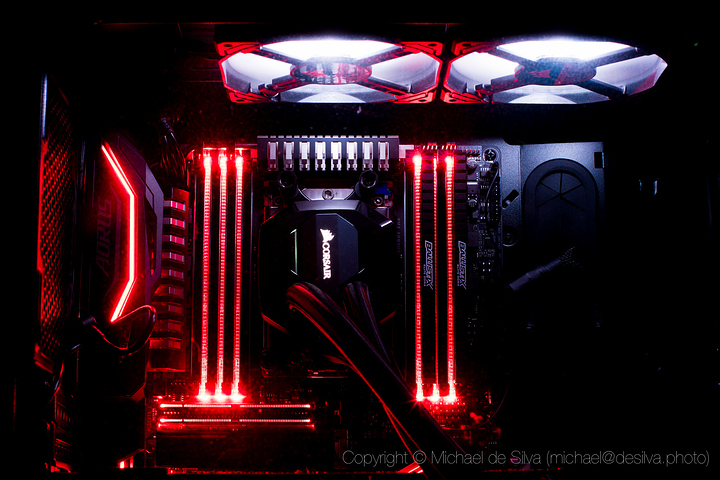 Thought I’d share a glamour shot that I took heh.