I used Mayhems Aurora Silver! but I had to change it out for EK Acid green, due to the Mayhems clogging up my monoblock :\

Thank you, I always wanted a yellow PC, something like Ferrari’s Modena Yellow. This was done a while back there is a full write up on the process here, long dead but good for the viewing. I need to redo it though, this is Montana Acrylic paint and quite sticky pretty much forever. When I redo it I want nice glossy paint like a car.

The pictures show it like a candy yellow color. Yet it looks nice. I love systems, that are outside the standard red/black/white template, that is everywhere.
I love colors other than black and white said I, while running black and white system… 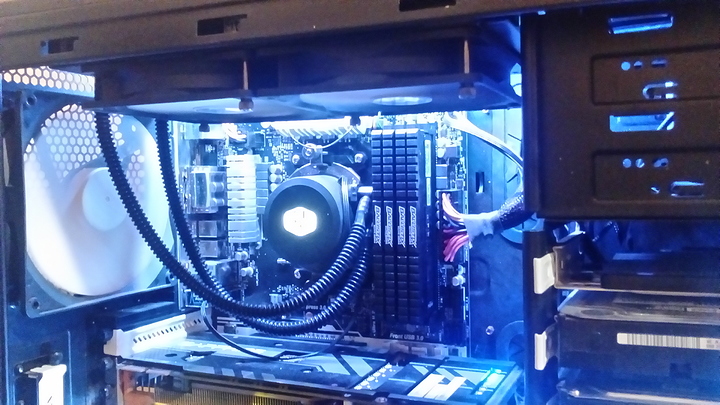 Aahhh ok. I wonder how the Vue fluid would be like. Jayztwocents did a video on it and he said it supposedly doesn’t clog up the blocks like the Mayhem fluid does.

There are a lot of Vue complaints and it’s turned into a larger headache than initial impressions gave for a lot of people.

See this thread: I got fubar

Whoa thanks for the link. I think I’ll avoid Vue then. Probably go with dyed distilled water.

ye, try to avoid any coolant with those kind of additives, stay to a regular fluid with good anti corrosive properties

Arc Midi R2… Back in the day I got this one instead of H440 for the 2 reasons it had fan controller and it have better airflow.
I made some changes to the hard drive cage setup… 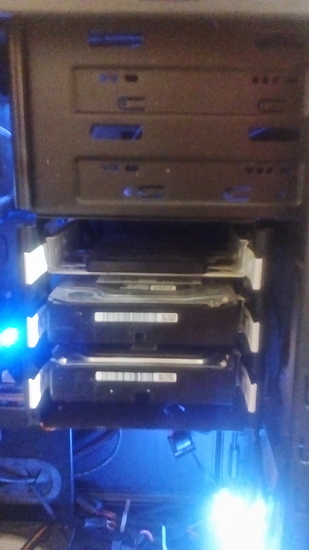 1519053639881-2020756903.jpg1440x2560 1.01 MB
I directly screwed the small cage to the optical bays. I had a plan to remove the optical bays and screw the hard drive cage directly to the roof. Yet I am afraid, that they count on the bays to support the frame. So I’m still considering it, but I may have to check for some support bars or something if it turns out the case becomes wobbly once the optical bays are gone.

PS: pay no attention to the bad cable management. Whenever I have the financial means to, the next upgrade is Seasonic Focus+, modular with black flat cables. So I will be able to cable manage this way better.

This case started black and white, but I never colour matched my components. It was a build on a budget and it got upgrades over time, one was the case.

I like white and black builds, that is what I wanted initially and have another white case, a cheap aerocool Sixth Element, that was not made as well as it could have been. So I plan to mod that and have started to some degree but it is on long term hold. But that will be white and black.
It looks good when it is all together. I like the ram in your system.

I never colour matched my components

The thing is, you can color match and not really change much when it comes to the financial part. I mean when I needed new system, I just looked for black and white motherboard. Then I took the AIO with white LEDs, and I chose a RAM, that is in my QVL list and fits the build having no extra colors.

It’s @w.meri’s ram. I like it though. I was thinking about buying white modules, but then I would look at them from the top and I think this and the Kingston Predator are the best black and white looking modules. The Predator is kinda expensive though.
https://www.vortez.net/articles_file/37143_kingston_hyper_x_predator_installed.jpg
https://media.kingston.com/hyperx/key-features/hx-keyfeatures-memory-predatorddr4-2-lg.jpg

Now the only thing that ruins my black and white build is my dear dear Sapphire Toxic 270X… My beautiful sweet Toxic 270X… I adore that thing. 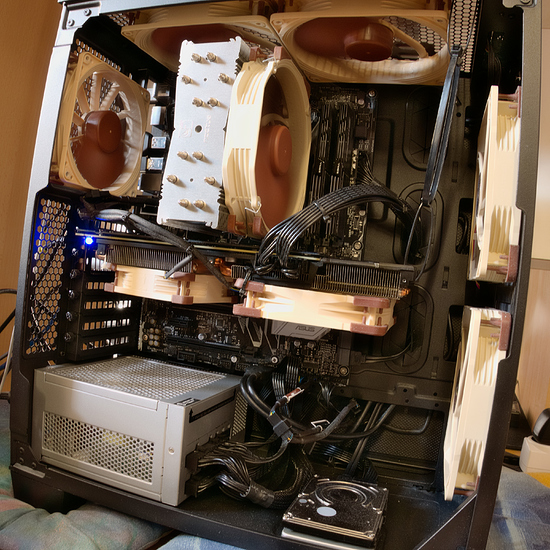 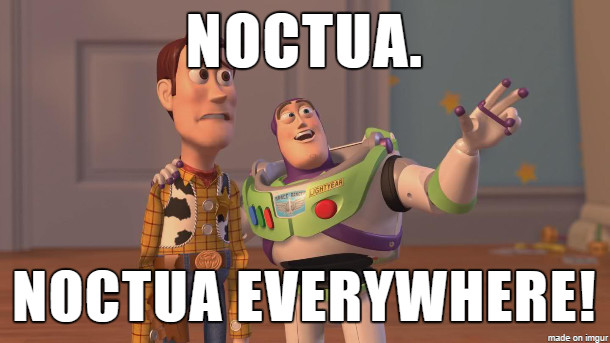 So is the card controlling those fans or do you have them on another controller?

Those fans (92mm right on the GPU and 120mm as secondary) are controlled from the UEFI and manually set to 50%. Furmark can push the card up to 80°C but nothing else does. 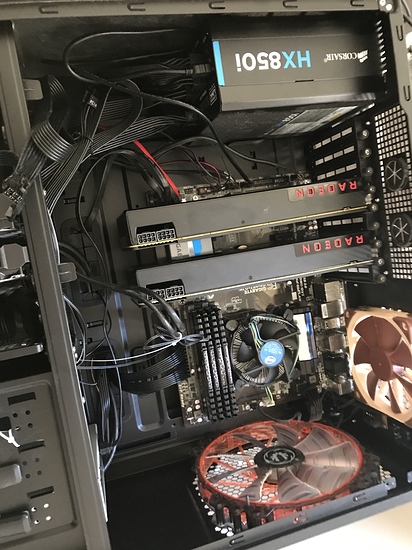 OK, so my main home PC (mostly used for gaming, mining when not gaming and other general nerd stuff):

Planned upgrade path:
AMD
Either a threadripper or Ryzen 2700x.
In a Fractal R6 case
with a water loop

The main sticking point is the cost of DDR4. I want/need 32 GB or more for some of the things i mess around with (VMs mostly). DDR4 cost at the moment is insane.

Ahh, a build from Australia I see.

Finally got my HTPC gaming-capable machine together today. I’m excited! 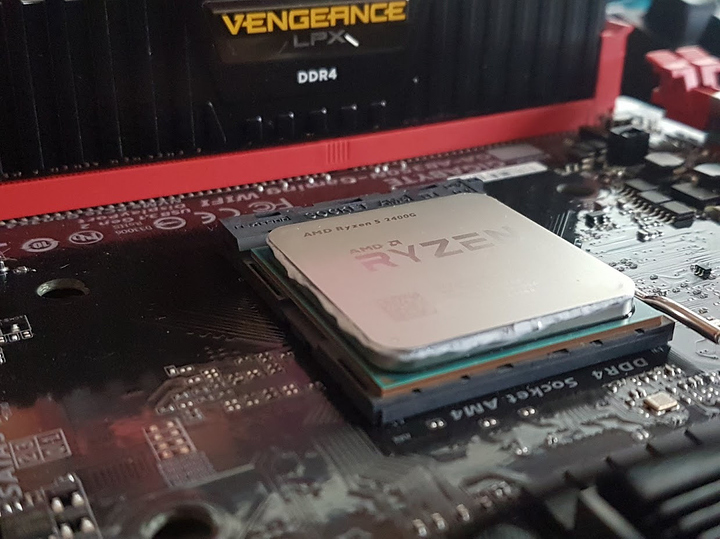 All built up! After installing and removing the mobo a few times you figure out pretty quick where the cables need to be to get it all in and it’s not as annoying as the first time: 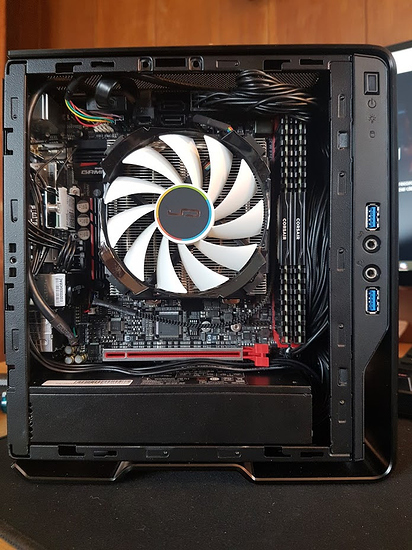 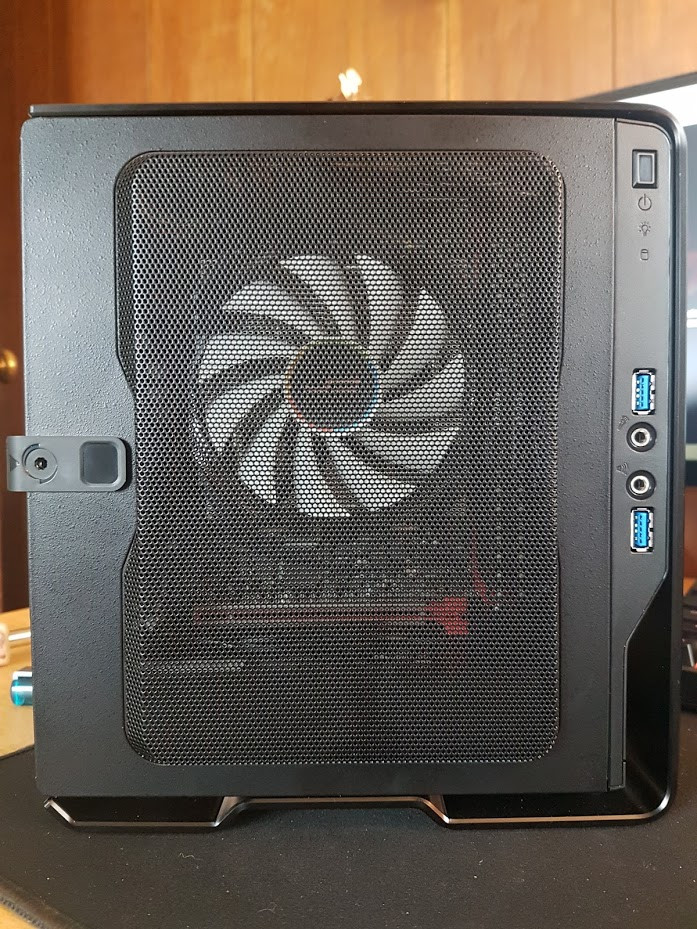 Turns out the fan blades contacted the mesh just barely so I made some ghetto standoffs using electrical tape: 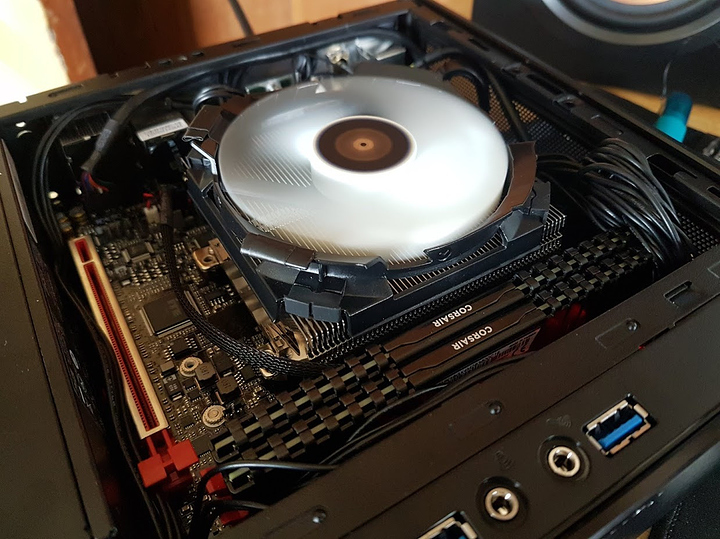 Attached feet to the bottom (well, back panel) because this’ll be living on its side in the entertainment center under the TV: 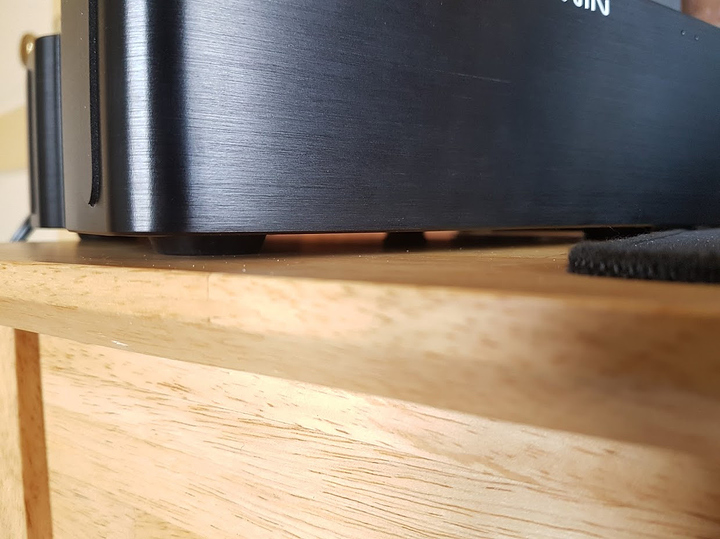 AMD Ryzen 5 2400G (in agreement with @wendell about value here)
2x8GB Corsair Vengeance LPX 3600 bought via r/hardwareswap (running at 3200 right now but I will improve that, it’s B-die after all)
Gigabyte AB350N-Gaming WiFi
Samsung OEM 120GB NVMe (got this cheap)
Shucked 1TB 2.5" HDD, I think it’s a Seagate.
All shoved into the In Win Chopin with its 150w PSU (I’ll be doing some wall draw testing tonight I think).

Update to the Chopin build: replaced the stock C7 fan with a 120mm Rosewill slim that’s much quieter and temps dropped close to 10°C. The cooler is good but the fan kinda sucks. I might suggest anyone building something similar look at the Noctua. But I’m pretty happy now. 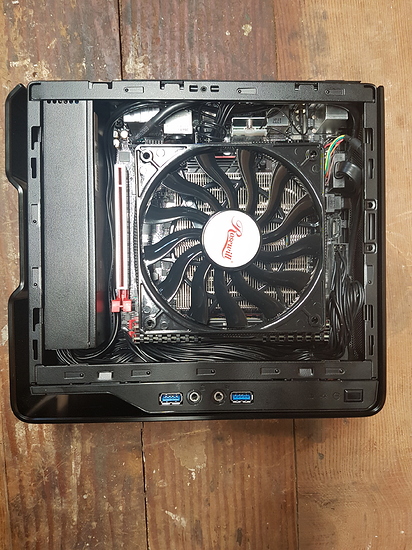 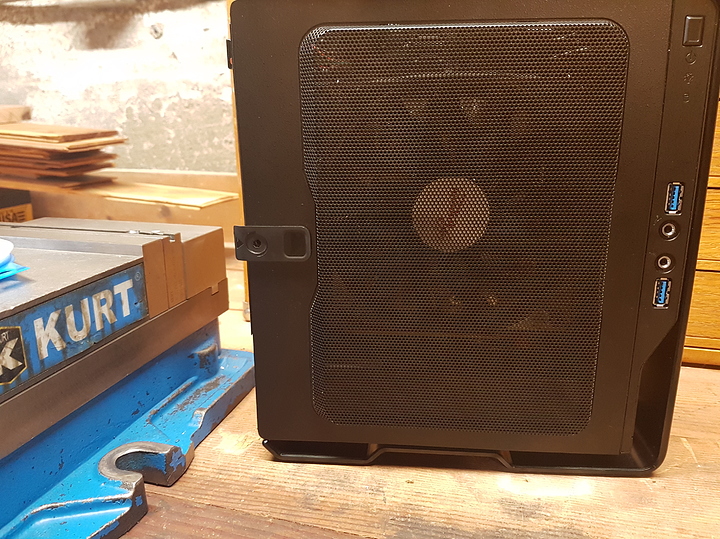 Yeah the 15mm thick Noctua “NF A12x15 PWM” is amazing other than its look and price… best slim fan I’ve used, although sadly the application I got one for it actually didn’t fit without some additionally width reduction and the sheet metal of the case being stretched out an extra mm or so… note to self and others, traditional slim fans are half width (12.5mm) nominal (although actually more like 13mm), not 15mm. I think your application would have fit the noctua without mods though…