As far as I could tell everything was fine. There was a backup in the last 24 hours so not a shit-your-pants situation, I just needed to get the box back up.

I am going to try this and return

Alright team, I got another situation. I have some docker containers up and running, we’ll use keycloak at port 8082. When go to http://<ip>:8020, everything is fine and dandy.

Whomst-ever, I tried to add an nginx reverse proxy and it’s acting like it can’t find the host? My config basically looks like:

I don’t remember the exact errors (I can get those tonight if it will help) but is there anything special about proxies in docker?

I havent found anywhere that has it in stock.

Hey guys, I thought you might like my Home(lab)-made Container Orchestration Platform that I made because (in part) of this blog. Lemme know what you think!

Considering selling my current storage setup (6 core i5 . 8th gen with 64GB memory) for this: 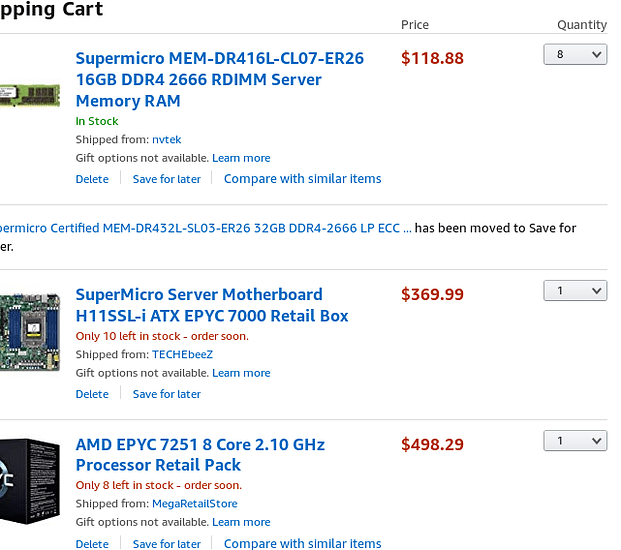 maybe…but not really. My next step probably should be more harddrives…

damn you… asking the questions that make me reflect on my idea.

… might could if I also sold my compute system and integrated everything into one machine. But I dont think I want to do that.

Yes, but give me the old hardware

no, he runs arch btw

no, he runs arch btw

pfft Archlabs thank you. Pure Arch is for hipsters

I’ll install it all if I get free stuff, @Adubs will just put freenas on it

as a meme, all of the distros are

Im changing my answer… I think the cool points are worth it… and hopefully next gen Rome still works in current motherboards.

I’ll consider it a tie, and wait for more votes.

@Adubs will just put freenas on it

I’ll put xpenology on it because ecosystem

integrated everything into one machine

but I like have my storage server separate and using fibre channel with LIO.

Both machines avg around 70w for light use (each)

maybe reduce my power usage having 1 machine vs 2…

combining all three into one system would lower my power bill, but I would lose the flexibility to reconfigure or takes things offline without affecting the entire network.

But I like having a dedicated SAN… if I wasnt limited by pcie slots on ITX… Id have more options.