I’m going to be running a number of large, container based workloads that are going to require fast NVMe storage. When looking into IOPS, all the posts online are basically asking the question “Are two RAID0 drives better than a single drive?”.

I want to ask, in terms of raw IOPS performance, are two individual drives, with divided workloads, better than a RAID0 drive with all the workloads? I tried to ask this on Reddit, and the answers were all over the place.

To make this easy, I’ve added a picture and I’m wanting to know, “Which scenario is NOT TRUE?” 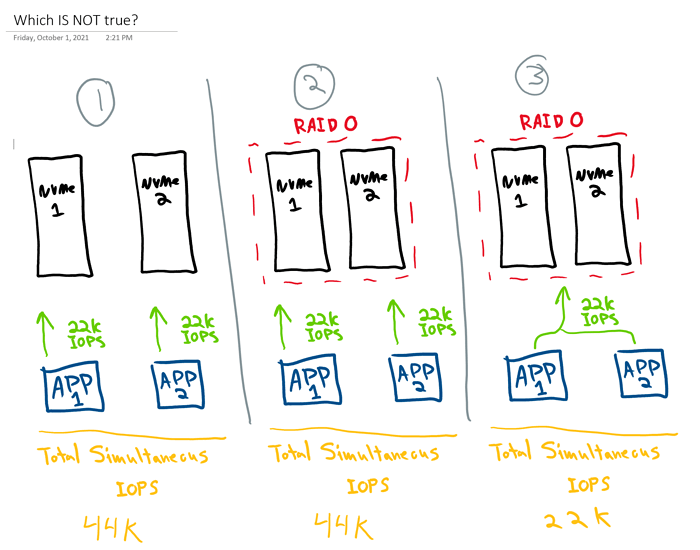 image1900×1492 143 KB
I’m pretty sure #2 is false, but I can’t find any resources talking about total system IOPS, just individual drive IOPS. Any nuggets of wisdom here are most welcomed

P.S. This isn’t important data and does not require data redundancies. Speed is all I’m interested in, hence the RAID0.

In most scenarios, 2 drives in RAID0 are better than 1 drive. However, there are cases when the storage is so fast, that the communications to it are too slow to keep up and create a software bottleneck. This is what happened to chocamo ITT:

I have had a plethora of NVME related performance issues with RAID and Linux. I have been following various issues as far back as Wendell helping Linus with his server NVME/ZFS/Intel issues. At the time I had 8 of the same Intel model. I am trying to tune this system for PostgreSQL. Since all my issues appear storage related I am starting from scr…

He is using Kioxia SSDs in RAID10 and he is getting lower IOPS than a single drive, doesn’t matter if it’s just 2 drives or 8 drives. Also, Wendell and Linus also faced the same issues when trying to create monster SSD arrays with fast NVME drives.

So, with that said, keep the above in mind, you could face a similar situation.

in terms of raw IOPS performance, are two individual drives, with divided workloads, better than a RAID0 drive with all the workloads?

It depends. Sometimes you may get double the IOPS, sometimes you may get more, but not double and in the cases like the one mentioned above, you may get less than just using 1 drive. I would argue that if you have 2 separate applications that are IOPS hungry, to put them on different drives, so that one doesn’t bother the other. If performance is a concern, it is generally better to have dedicated resources than to have shared resources. Due to this split, you will get more consistent performance, as opposed to higher performance. Consistency is usually more important than raw performance.

Raid0 has the additional benefit that your IO is pooled. So app A could do 33k IOPs for example, if app B is idle. One drive per app and you’re hard capped at 22k per app.

I think the performance in the variety of your depicted scenarios depends on several factors.

I’m sure you’re aware of the doubled odds of catastrophic failure in RAID0, so i’m not gonna mention it, by mentioning it anyway. LOL, circular dependencies!

If you can afford it, add redundancy, e.g. RAID10/striped mirrors.