Nvidia Has no Interest in Mantle, "Doesn't do anything you couldn't do before"

Apparently Nvidia thinks Mantle is a Dead API and sees no future in it. saying DX12 will do exactly what Mantle does,

I'm not surprised Nvidia would say this i don't think Nvidia would use something from a competitor any day of the week.

Also this is Nvidias Graph showing how Mantle "Isn't Helping" 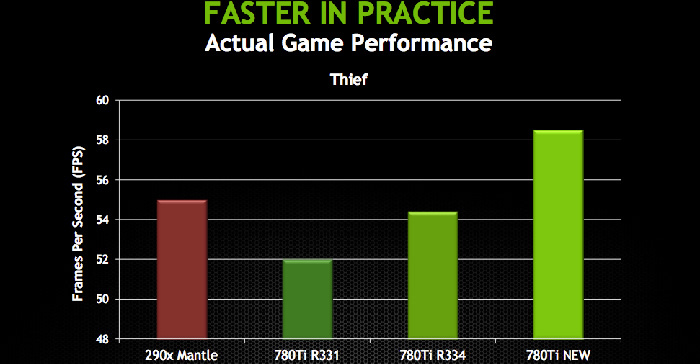 I think Nvidia just pulling more stuff out their ass till they finally get put in a corner where they will have to use it, especially with the Rise of Linux gaming in the coming future with SteamOS, where Mantle is supposably easier to port from PC to Linux Machines.

Well no they are not, if they need something or something could run faster; Microsoft is there to fix it for them in directx :)

Mantle will most likely be incorporated later in PS4 because it will run faster than through opengl. Thus ps4 ports to PC will run better.

The plus from mantle is that its open for developers where as DX is closed. You have to scream at MS to do update for dx, and in the end they release it with their new OS forcing their players to upgrade system before they take advantage of new optimizations. In longer run developers will be more happy with mantle - doesn't matter if api is going to take on or not. (probably not - ms got the swag and cash.)

To survive mantle has to be given in open format and has to be injected into opengl somehow or vice versa opengl to mantle.

Remember NV and MS are known for making optimizations for themselves - they are also known to not work with amd.

*another + from mantle - more visionary than real  - future no requirement of drivers as game api will have low lvl access to gpu -> drivers will not be needed for optimization or anything like that. Its going to be like in previous consoles.

I think the reason why Nvidia doesn't like Mantle is because they are trying to protect CUDA, their GPUs are CUDA ASICs so if the inner workings of CUDA get published through Mantle Nvidia would be in trouble because all that Nvidia has that makes them worth anything is that software

i think if AMD gets their act together with Mantle and Valve hurries the hell up with SteamOS they have potential to takeover the Gaming Industry. Microsoft isn't doing well with Windows 8.1. and the XBone isn't doing well Either, I think if Microsoft continues this Path in a couple of Years they are going to go beyond downhill where they won't be able to get out of it. and Nvidia isn't going to get far with Proprietary Hardware.

Notice that the chart starts at 48 FPS, by doing that it makes the bars on the chart carry a greater visual difference to make you perceive the difference as greater. Nvidia does that commonly to try make differences seem greater than they really are.

Is that to protect their precious PhysX?

I don't think Mantle really matters for higher end hardware anyway so this chard is moot.

Plus from my understanding it's main benefit on higher end systems is a higher minimum FPS, which is not displayed in that chart.

That is correct. I've either seen this or a similar chart before.

SteamOS - While I hate valve for spying on their customer and doing whatever they wish(sell etc) with the data they collect from their users. I'm also against bring steamos as its bringing DRM practices to linux (oh my god what it has come from) soon people will try to sell with GNU Open license... and attach DRM there too... So no steamos has no future... steamos is meant to die. Developers and publishers need to understand that business models that were successful were in 90's, and they were different than those of today. Take Witcher 2 in account - even though it was DRM free week after release it hadn't been downloaded a lot. They spoke nicely about it and why - also why Witcher 3 will not have drm at all. Look into youtube. - And they did make enormous amounts of cash from sales... making it one of the biggest AAA games out there at this moment.

Now let me list the + of steamos -> its bringing people to work out the driver issues on linux boxes and if windows closes itself down to marketplace then people will go to linux 100% and if steamos will become amazing in driver-wise; it might have a greater chance of attracting people.

People are so raging about "same" specs of the consoles and the resolution crap etc fps... wow... Yeah ms is a dick but sony is dick too. Don't forget it... Building AMD based systems shown that MS brought design from Sony so all that crap ms shown was originally sony's idea (don't forget whom sony really is - don't you dare to forget the copyright DRM whore). Those console construction shown that they are aware that people are poor, they don't have much money to spend so they need to be done cheap... and they were... Now lets just to performance - the performance that people are seeing is but nothing at this moment... People are forgetting that our current programmers developers (ex. Ubisoft) are noobs who can't program without memory leaks etc... we lack decent programmers ... and thus is why the performance is shit... once those sh*t heads learn this architecture the games will run even 100x better. Unless they would want to sell ppl new consoles with better APU - +15% of performance for another $400 (399$) feel evil yet? =)

Nvidia is an asshole that is true - and if it was up to developer he would resign from their workshop effects apex etc... because its not being delivered to their whole user base and implies restriction in their code and having their programmer mess around in their code - possibly making intentional codes that would slow down amd cards... But on the other hand there are managers and nv is going to pay big buck and send their programmer for free to help you with the code... fuck 40+% of player base uses different cards. We don't need their business... we need nv because they are paying more. So lets make a game for NV not for the actual players.

Even if nv would not sell a single gpu to market in 2-4 years they are safe... since they have made a lot of contracts with military in recent years... they are simply safe.

To your first paragraph:

Never heard of Valve selling user data before don't know where you heard that.

Valve's "DRM" is an optional part of Steamworks devs don't have to use CEG if they don't want to. Nobody is forcing devs to have DRM for a Steam version. If there is DRM, blame the developer.

Steam from the start was collecting data. Its exactly the same thing that origin or any other clients are.

i hear dx12 is trying to be a lowlevel api just like mantel. hmmmmmmmmmm i wonder why

Every company does that for a few reasons

Nvidia's not the only one, I've seen charts like that from Nvidia, AMD, Intel, and even ATI when it existed. It's nothing new.

Wonder what speeds they are running at, ie is the 780ti overclocked, or is the mantle using an older diver and comparing it to newer ones?

There is already software on linux that has drm.  All steam os is, is debian that boots in to steam big picture pretty much.

"
No, no its not. There are games on steam that can be launched even without steam open. There may not be many but that still means to have a game on steam it does not HAVE to use drm.

"once those sh*t heads learn this architecture the games will run even 100x better. "

1) DRM on linux = I know and its terrible. God thanks i use Slack.

2) The Steam client itself is a form of a DRM even if developer or application isn't using it. It exist at point once you lunch game from the client.

3) Well thats not about this type of architecture -> what i meant is that in consoles they have unrestricted low lvl access to hardware. There could be a lot of tricks, optimizations that could be implemented; since they are now trying to port games from PC to consoles we get results here. *Watchdogs example* Once they learn the hardware they are working on they will find amazing ways to optimize it and save on utilization, cpu/gpu time. (From stand of programming for consoles they can overclock / downclock the hardware as they wish in which points they want - thats how you were dealing with some scenes in past on consoles too.)

Sill anyway because the 780 Ti is already a faster GPU.

While the new driver does improve performance, although I doubt that much nVidia always inflates it, the 780 Ti is already a more powerful card than the 290X and beats it anyway...

I always take graphs from both amd and nvidia with a pinch of salt, neither can be trusted :D

I am assuming you are paraphrasing when you say that as I cant think of many things that allow for you to pair a £150(ish) cpu with a £400+ gpu and get no (or very little) bottlenecking on gpu bound games that have light cpu usage.

you can expect crazy uneven builds like that to become more common when 'to the metal' stuff becomes more common place.

i dont really care what derivative we use (mantle, dx12, heck even metal :D, although that last choice would mean apple have now become the master race).

there is a pretty good tech demo showing what apple have managed to get out of an ipad using 'metal', and that is on pretty aneamic powervr on a cortex a7.

any model (the current dx) which is based on increases to single thread performance of the cpu so that it can drive more powerful gpu's better (by being able to feed it faster) is flawed, especially in this day and age when cpu companies (intel / amd) are moving towards performance per watt.

the point is that kick arse hardware (which most of us have) is pointless without efficient software that runs on top of it.

Without proper efficiency in place on the software side of things we are just the tech equivalent of musclecar owners revving our engines and feeling smug about how 'powerful' our vehicle is.