So I got Clevo/Metabox laptop used with no boot drive. So I decided to slap in my ssd from my other laptop that has Windows 10 unactivated and activate it on this machine.The weird thing is that I get really crappy FPS in games for its specs. Like I get 15 fps in Counter Strike Source. I have tried using DDU multiple times and reinstalling the drivers. I have tried setting Nvidia control panel to use dedicated GPU which is the 860m inside and have checked that Windows is on high performance mode. Also the 860m wasn't being used when I checked with HWMonitor. Anyone got a fix? Will meet you in about 6-8 hours because i'm heading to sleep. The guy who I bought it from said that it worked fine since he ran Unigen on it.

The laptop I yanked the SSD out of had weaker specs 740m and i7 4700 and it played games fine.

Ok now that we're through the obvious, lets take a look at things less obvious
- check if you are running from integrated intel graphics. (disable that graphics from bios or you'll need to select your gpu in config of the game manually by editing configs.
(maybe can be disabled from device manager - but don't count on it)

check if 1080p monitor is being feed through your intel, and if you have same issues with your built-in monitor.

You could try a clean install of Nvidia drivers to start out with.

If all else fails, I would suggest reinstalling Windows.

EDIT:
It's probably this.

check if you are running from integrated intel graphics. (disable that graphics from bios or you'll need to select your gpu in config of the game manually by editing configs.

If I understand correctly you just moved a Windows install to a new machine?

You can't do that with Windows even if it's the same hardware. Every piece of hardware is tagged to that Windows and to swap the whole thing will cause a lot of issues. If that's what you did im surprised it even booted.

Recap of what I said and more things.

2.I have already set in the Nvidia Control Panel to use the 860m but to no avail after multiple uninstalls and installs with DDU @behindthetimesgamer 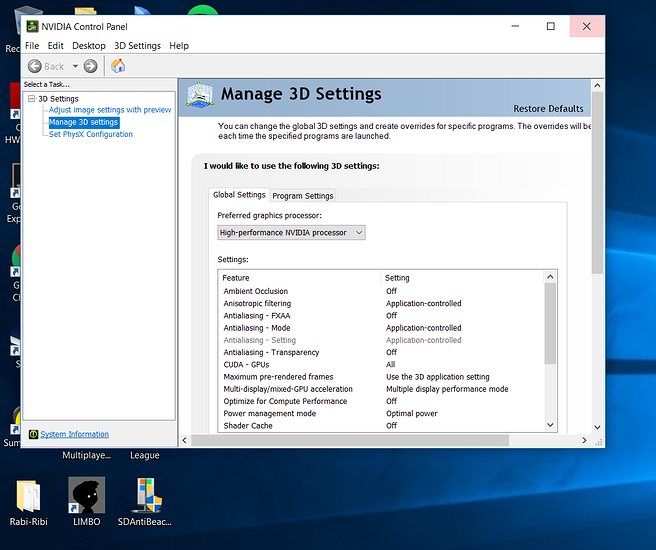 3.(AMD) I would like to have a laptop to last as long as possible and also that I don't need to have a fire extinguisher /s. I have a HD 7950 in my main desktop which use to house a R9 290 which I killed it with static electricity. It was the only laptop that was good in my budget that I could find.

As others have said I'm going to reinstall Windows. @_hill Windows has a built it in feature that it 'adapts' the new hardware which personally in the past for me I had no issues about .

@MrChumps As the others have said (and now yourself) the installation of Windows 10 is a good strategy to try. Working as a tech in a repair shop, I've had the easiest time just imaging the drive for a backup (if you have no data, good on ya) and then downloading/making sure I had the latest version of the Windows 10 ISO, and seeing what games ran after downloading the latest video card drivers. Good luck on trying this all out man!!!

Yes it has that feature which in the past worked alright but with Windows 10 nothing works correctly the majority of the time. Had almost exact same issue as you recently trying out that feature.

Thanks for the help guys reinstalling windows solved my performance blunder. I was typing this up at midnight so pissed why isn't this working and I got no time to reinstall my stuff.