Creating a numbered list with source code formatted tags inbetween each item causes the numbering to restart at 1.

Putting script tags inside script with another script block after normal content causes the first script block to not be closed and run across the content in the middle. 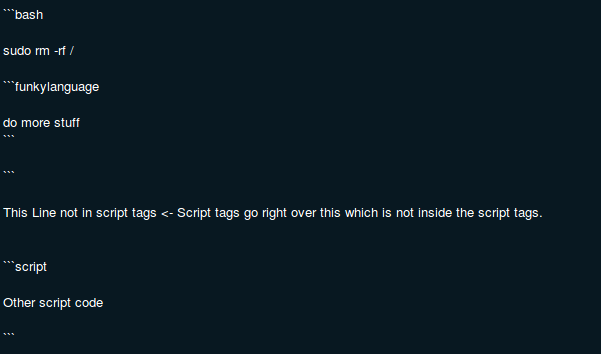 Updated to include new observations

See this post for where I first discovered it:

A short guide to installing the Wire secure communication client on Linux Debian Install apt-transport-https to fetch packages over HTTPS sudo apt install apt-transport-https Import the Wire PGP signing key to verify installed packages: sudo apt-key adv --fetch-keys https://wire-app.wire.com/linux/releases.key Add the Wire repo to your Sources list echo "deb https://wire-app.wire.com/linux/debian stable main" | sudo tee /etc/apt/sources.list.d/wire-desktop.list Lastly, update packages list and install Wire for Linux on Ubuntu with this command: sudo apt update && sudo apt install wire-desktop Other Distributions (AppImage) As of now there is now custom RPM repository for other distributions As of writing this you can use this command to get the latest AppImage of wire mkdir ~/bin/wire wget https://wire-app.wire.com/linux/wire-2.13.2739-x86_64.AppImage -O ~/bin/wire/wire.AppImage Make the AppImage executable chmod a+x ~/bin/wire/wire.AppImage Run the application ~/bin/wire/wire.AppImage & Manually Add Wire to your launcher menu of choice Also yes, the numbers all being 1 is a bug. Tagging @wendell You can find me on wire under @catsay

I think that's because <pre> tags come before code blocks during markup usually. Issue with discourse, I don't think L1 can do anything about this. You'd be better off filing a bug report on the discourse github.

Yeah I gave It another test and It basically comes down to how browsers handle HTML and how Discourse converts it's own markup tags to HTML, as well as how it sanitizes input I guess.

Here's an example of how regular HTML behaves in a browser using HTML 'pre' tags.

Then what I wrote below: 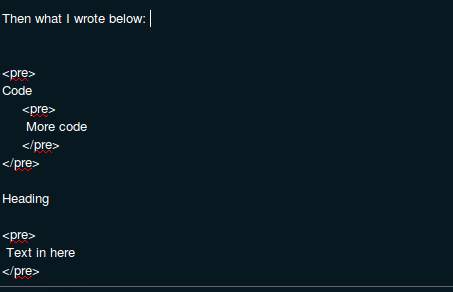 And the result as rendered on the forum:

So likely there isn't much to be done about it anyhow.

My buddy @Goalkeeper noticed this before.

Ok so looking at the code that discourse generated It's clearly an issue with escaping nested tags as part of the input sanitization process. It's just not done correctly since it simply terminates on the next closing tag instead of the last aligned tag. 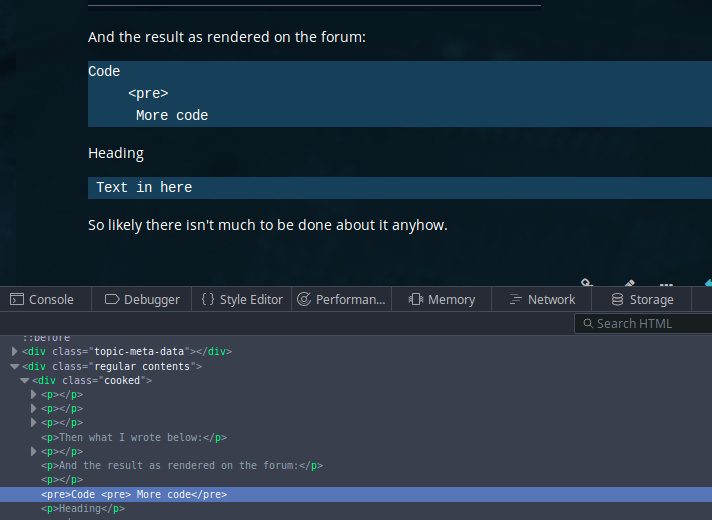 This is what happens: 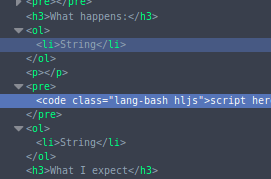