Yeah but it doesn't just affect the US, we know this already.

"Hey uh why are me getting calls from Brazil Germany and Uzbekistan? WTF is going on?"

no, thats not the goal. Calls from outside of US from non-us citizen are viewed as bias from outside or other countries trying to sway US views. They will be viewed negatively. It is the American people that needs to act.

Thats why our job is to inform/educate American citizens so that they can make their own choices to save the world.

Torches and pitchforks, rioting at the keyboard hardly cuts it.

It's basically the same behavior as this: https://en.wikipedia.org/wiki/COINTELPRO

Naturally they want to identify and characterize every citizen that is not an easily controllable sheep.

We're getting to the point where the mindless, uneducated masses have become these stupid, brainwashed, subservient and submissive little dogs to the NSA. If they see something unusual that they don't understand, like a professor jotting down math equations on a piece of paper, they'll panic, and they'll jump up at Big Brother, yelping and whimpering.

"help, help, Big Brother, that man is doing something I've never seen before... He's writing lots of numbers on a piece of paper in ways that are different from 2+2=5. He's even using lines and using letters instead of numbers... I'm scared, Big Brother, I think he might want to hurt me. I mean, people who write normal sums like 2+2=5 are nice people, they never do anything scary, but I don't know about this man... He's doing strange things... Big Brother, he has a strange face. I think he wants to hurt me... Don't let him hurt me, Big Brother..."

And the tall, thin man with sunglasses and a pinstriped suit will reach down and pat the dog reassuringly on the head whilst injecting saline solution into the dog's carotid artery that the dog has been told is "something to make him less scared".

"Don't worry, pet..." he says, licking his lips,"Big Brother won't let anything happen to you. Look at that man's nose. It's a funny shape, isn't it? You know what they say about men with funny noses. They can't be trusted. They may try to hurt you, they'll speak complicated words to you that will make you confused. We can't have that. But don't worry, as I said... Big Brother will always protect you." And with a click of his fingers, guards step in and frisk the mathematics professor, and find a mechanical pencil in his jacket pocket. Mechanical pencils have been outlawed because of their complex design, and their inventors have long since been jailed for fear that they may rise and overthrow the establishment. And the mathematics professor is gagged, a bag thrown over his head as he is carried off for questioning and "re-indoctrination".

We laugh, but this is what it will escalate to if the ignorant masses are given a voice disproportionate to that which they actually understand.

help, help, Big Brother, that man is doing something I've never seen before...

Don't worry, Onii-Chan's got your back! 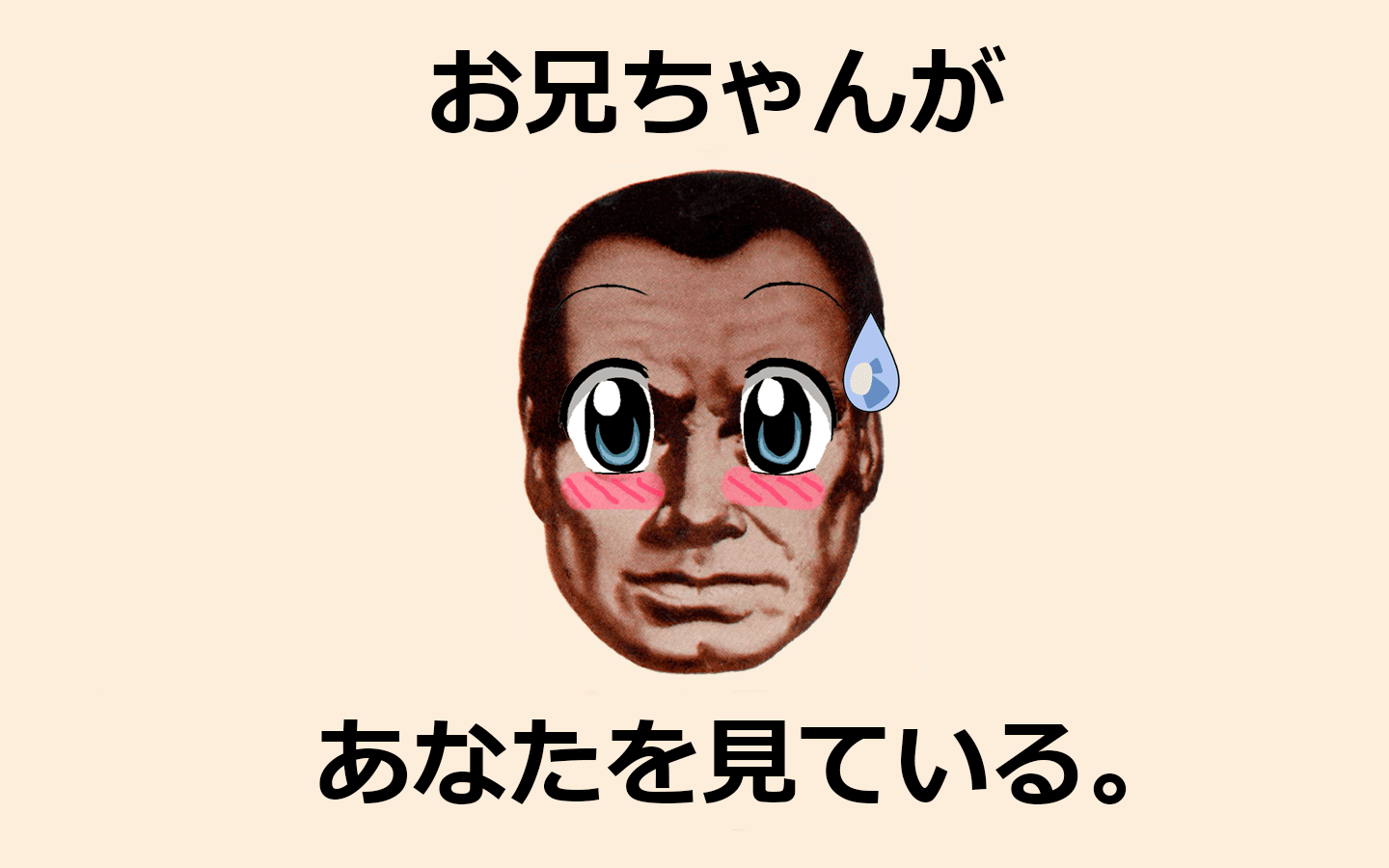 Isn't everything outside the bounds of mainstream extreme?

So...does this mean if someone searches for information on Miles "Tails" Prower, looks up the CD Tray joke, or information on any kind of USB-based technology, they'll get flagged as an extremist?

Hold on a minute... so understanding how evil many businesses are, how corrupt the government is, and understanding how certain things actually work (you know... scary things like math, economics, computers, physics, etc.) and having the mental capacity to articulate these ideas into a very well thought out argument in an effort to enlighten the ignorant masses is extreme? Well i dare say everyone on this forum is on multiple government lists then. I could honestly care less about being on some list though... I'd rather speak my mind than not have one to begin with.

I opened that article to read it again and all of a sudden all of my hardware had a giant upload and download stream >.> I'm feeling a little sketch so I turned the net off on everything.

I'm just waiting to be snagged by a white van at this point.

I opened that article to read it again and all of a sudden all of my hardware had a giant upload and download stream >.> I'm feeling a little sketch so I turned the net off on everything.

Incredulity: Surely you're not serious.

Well I tend to not joke on things. I'm just sitting here at the moment. Theres thunderstorms so maybe its something on the wire but I don't really know.

Fuck this I'm moving to iceland.

Suggestion: Since you're already there and it could actually be true, you could screenshot the page and post it here as a precaution. Observation: But then the website won't get the hits and know this article has gotten a lot of attention...if it wasn't planted as a lure.

Rhetorical Query: How's that for conspiracy?

Oh I turned all my stuff off I'm on my phone now. No I'm not going back on that site either in case it IS a honeypot.

and having the mental capacity to articulate these ideas into a very well thought out argument in an effort to enlighten the ignorant masses is extreme?

I'm not writing an argument here. I just thought that's how the language works. Of course there are multiple layers between mainstream and extreme but we don't have a word for that. So the opposite of mainstream must be extreme. I'm not implying that the word 'extreme' means something bad. Rather It could be used to describe something small or niche or less known.

I was agreeing with you lol. By argument i simply meant a healthy exchange of ideas, not a toxic exchange of words as is often what people mean when they say 'argument'.

1984 is calling, they want their dystopian future back

Oh I turned all my stuff off I'm on my phone now. No I'm not going back on that site either in case it IS a honeypot.

I don't think that's the appropriate term, as it's not there to draw out attacks, but I understand what you're trying to say.

I'm not writing an argument here. I just thought that's how the language works. Of course there are multiple layers between mainstream and extreme but we don't have a word for that. So the opposite of mainstream must be extreme. I'm not implying that the word 'extreme' means something bad. Rather It could be used to describe something small or niche or less known.

Semantics can be a tricky thing. Language can have all sorts of unintended consequences by means of connotation through cultural context. This is best seen through the evolution of political correctness: Fireman becomes firefighter; policeman becomes police officer; mailman becomes mail carrier, etc. These terms and similar ones imply these occupations can only be done by men. The new forms are neutral and explain the actual occupation of the person instead of his or her sex and/or gender.

However, political correctness sometimes goes too far: short can be referred to as vertically challenged; African American instead of black; and the evolution of PTSD from shell shock (This is a very special case though:)

The case of shell shock's transformation into PTSD (Post Traumatic Stress Disorder) is quite complex. Basically, it transformed into PTSD as a result of science. While shell shock clearly is a much more raw and visceral term, immediately conveying imagery and an emotional response, it didn't serve well in the science and medicine communities. Shell shock has its origins in WWI. During WWII, this diagnosis was changed to combat stress reaction (AKA combat/battle fatigue). It was not until after the Vietnam War that Post Traumatic Stress Disorder was coined, as it was observed civilians that survived traumatic experiences showed the same or similar behaviors that soldiers in or returning from war did. Post Traumatic Stress Disorder is a much more scientifically descriptive term that can be used to describe what any person may be experiencing. Because of its length, many refer to it now by its initials PTSD. The acronym further removes any meaning from it in that someone not familiar with the term won't have the slightest notion what is being talked about without context clues.

Many terms are in a gray area, and acceptance or rejection will be determined by personal experience, such as people-first language or culture: Oriental is a socially acceptable term in the UK for a person of East or Southeast Asian descent but seen as derogatory in the US, where the correct term is Asian.

Other terms are designed to intentionally attempt to change one's way of thinking: enhanced interrogation instead of torture; pro-life for anti-abortion compared to the rise of anti-choice used by abortion supporters, rather than describe themselves as pro-choice, some choose to do so by differentiating from the opposition; dead tree edition instead book; meatspace for "real-life," constrast with cyberspace; freedom fighter vs terrorist; millennial instead of Generation Y. These often come in the forms of euphemisms or dysphemisms but not always. Many of them can be used for political purposes.

Extreme could also in this context mean "outsider," "the edge," "fringe..." but it most likely means "radical," as in political radical.

Someone once told me "synonyms don't exist." This is true, because so-called synonyms bring along their own context and have subtle differences from one another.