NOOB to Linux, My Ethernet is there but won't let me search the webs?

Basically I had an drive laying around and I decided to install Linux on it and use it, I'm using Ubuntu the lastest version, and after installing the OS and it making its updates, it restarted and now it won't let me connect to the internet, i accdentially deleted the original Ethernet option on the network connections but I added it back now I just need help connecting back up cause I have officially made the move to Linux YAY! And pls remember I'm a massive noob to Linux and a thanks in advance to everyone who replies here!

Can you open the terminal and type ifconfig, take a photo and post it?

look for the device with a type "ethernet" and use the device name as the ifname. this should be eno1

I'm sorry now it's started working? Did it perhaps need a restart or is it a problem I should be concerned about ?

Maybe Maybe not. Linux doesn't tend to do unrepeatable things like windows normally does. But if tis working, tis better not worry.

thank you my friend

Very likely you set it up but didn't activate it, and it activated on reboot.
(ill mark as solved)

looks like the problem is back now here is my ifconfig 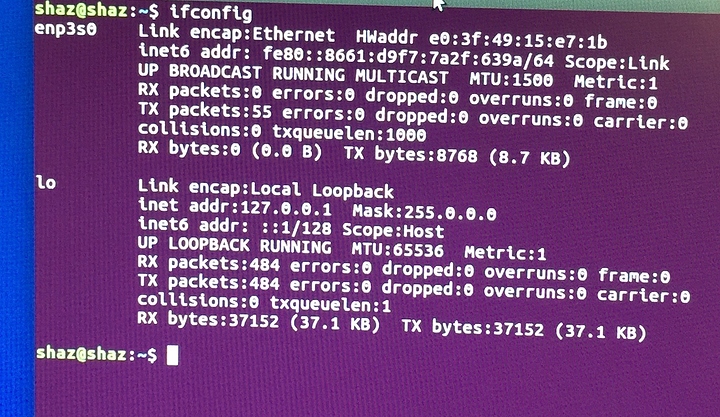 Run the commands i showed but use enp3s0 instead of eno1

Do I just type the first line in and then press enter and then the second ??

Yes but change eno1 to enp3s0 which is the name of your interface.

The first command sets it up the second turns it on

If you want to just setup the network and never touch it again. Ex: You dont want to use a GUI program to configure it.

and enter three lines that say

This is super simple setup that will configure the connection at boot, and stay override most other configurations in the system. Though its a pretty old school hackey way of doing it. 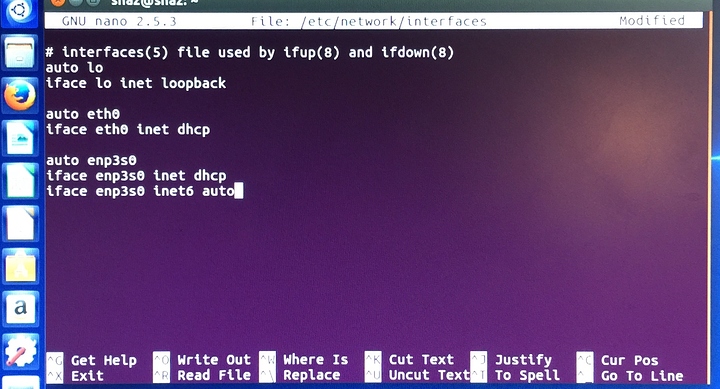 I think you probably want to remove the eth0 lines from that file as well, sorry.

You can save it by typing ctrl x to exit the program and typing yes / y.

I wish I could give you a faster way to communicate. but I don't have any idea, and I am about to go to work.

Hopefully, someone else can help you with this.

You werent supposed to press enter after con-name. You were ment to add the entire line that eden gave.

So. While @BigBrothersBinary solution is perfectly fine for Ubuntu you may find it restrictive as its doesnt use the same programs that unity uses for managing connections.

nmcli is the command line for Network Manager, which is used by unity when you see the connection/config in settings.

To break it down.

nmcli connection add type ethernet is saying add a new ethernet type connection (other types being things like wifi etc.). con-name Ethernet1 is the name that will be displayed and the name used to namage that connection config. Its a tag basically, and youll see it in the gui as well. ifname enp3s0 is saying use this specific hardware ethernet port.

So the whole command becomes

You still need to turn it on after that, which nmcli connection up Ethernet1 does

edit: it looks like your command was split in two accidentally maybe. its one line for the first command, and then the second separate command once its setup.

A command is a binary file, AKA a program installed on the computer. Programs normally are normally not installed into a 'folder' like in windows on Linux.

What the terminal is telling you is that ethernet1 is not a command/binary file it can run.

While @BigBrothersBinary solution is perfectly fine for Ubuntu you may find it restrictive as its doesnt use the same programs that unity uses for managing connections.