My rig currently consists of a delidded and copper IHS’ed 8700k mounted in a Fractal Design Node 304 underneath a Noctua NH-U12S cooler paired with a 970 STRIX… My question is… what case fans would cool this best?

corsair ml120 they should be fine for your needs for your pc.

The included fans should be enough.

The most cost effective move would be to replace the Fractal Design 140 mm fan with something that has a maximum speed significantly above its 1000 RPM. Something like the Noctua NF-A14 PWM would be a nice choice. Regulate it through the motherboard so that it doesn’t go all the way to its maximum 1500 RPM too often, as that will be quite noisy.

Personally though, I would begin with using tin snips to cut away the rear fan grill. (the metal is not too tough to cut) With the exception of nosy pets I think these restrict the air flow far more than necessary. See picture below. 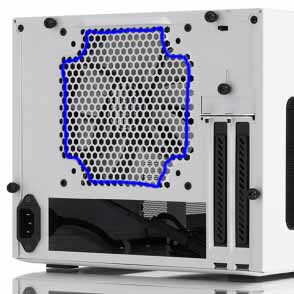