I can’t get Nextcloud to work for some reason. I already have ports mapped on 8080 and or 80 for the nginx page so I put it on 9090. Well I ran my docker file but still can not access

I used same PW at app and db… 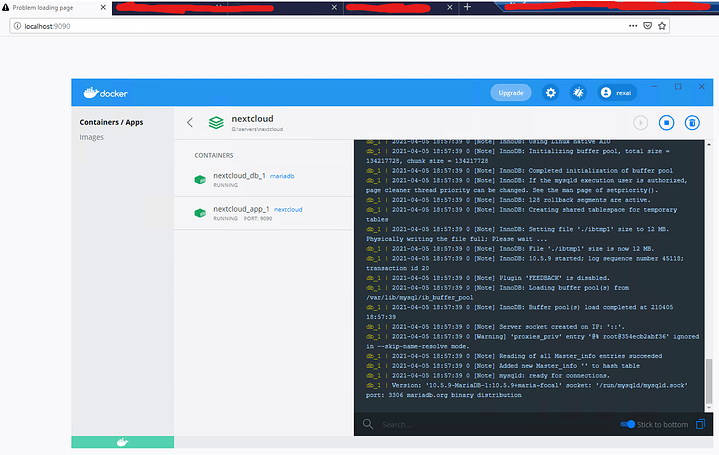 Try 9090:80 instead. NextCloud is likely trying to listen to 80, which is seeing no traffic because nothing is mapped to that port.

It’s been a bit since I played with Docker, but I am pretty sure you can have multiple containers bind to the same port so long as you have different ports exposed externally (8080 & 9090, in this case).

Also make sure they’re both on a Docker network that can communicate.

If you use the nginx image, you’ll have to use a PHP-FPM container as well.

I have 2 separate container

Yes you do. But you really need 3 (nginx, php-fpm and MySQL).

Question now is how can I have the files on a different drive. Something like this:

What OS are you hosting on?

On Linux, my experience is you need two things:

The issue was kinda solved, excluding the volumes thing. I don’t really know how to format the volumepaths in yaml readable for docker.

Anyways, this would solve the issue about not being able to access. The Page http://cc.abyss.fi

I don’t know how to setup https. I have serversided https certificate setup in the iis like mentioned in some tutorial but still can not access https://cc.abyss.fi or https://4byssal.ddns.net:9090

I found that to setup nextcloud all the way using my separate nginx server I needed to have a few more values in the docker-compose file.

that would be one that you might need if that is the url you want to access nextcloud at.

proxy may not need to be set in your case since its all on the same IP, but you could try adding it anyways.

I also found that modifying the config file for nextcloud directly was easier sometimes, I’m still testing to make sure that these docker-compose values actually make the edits. The docker image I used comes from here.

I also found that modifying the config file for nextcloud directly was easier sometimes,

I haven’t been able to find that file…

You may have to swap to sudo su to navigate to it. If so then you should consider moving to a dedicated volume at some point in the docker-compose file using