I'm looking to buy a fast wireless AC access point to complement my PfSense network. Don't need/want any bells and whistles just a simple fast AP preferably with few gigabit ports to handle my switch needs. Hoping to spend around $50 US but that can be stretched to around $80 if I need to.

Does anybody have a recommendation?

Not sure if this is all of what you're looking for, but..
http://www.microcenter.com/product/443445/HW7ACX_Wireless-AC_Range_Extender-Access_Point

or maybe, http://www.microcenter.com/product/445255/TEW-814DAP_AC1200_Dual_Band_Wireless_Access_Point which is a bit cheaper.

Thanks, those look pretty nice.

Oh hell, I should have looked up when I was thinking this over. I use an IPCop setup with a Tenda AC1200 router in AP mode and it's much cheaper.
http://www.microcenter.com/product/431845/FH1201_High_Power_Wireless_AC1200_Dual_Band_Router

Well oddly that one doesn't have any gigabit Ethernet ports; I don't see how it can reach it's claimed speed w/out those. I guess it might be able to between wireless clients, but I need high speed between my wired desktop and wireless laptop and phone.

Any router can work as an AP. If you want just an AP, there are a lot of recommendations.

My recommendation would be to look at some Asus routers and you can use them as AP's.

the way I saw it, it shares the 867Mb among the connected devices, but can only access 100Mb for the wire. for a gigabit connection go with the trendnet one. Unless someone finds a better deal for you.

I'll take a look at the Asus routers; I was hoping to find something cheaper than a high end router as I really just need an AP. I've found several AC1200 speed router/APs in the $60-80 range; I figure one of them will be fast enough. The main reason for wanting fast wireless speed is nVidia Gamestream over the local network to my Nexus 6. The nice Buffalo N600 router at my parent's place didn't quite have enough speed for it to work well any meaningful distance from the router.

Anyway in other news I got my second Cardbus Gigabit NIC in to complement the internal NIC in the old laptop I'm using as a PfSense box and the cable company is coming tomorrow to hook up my internet so no more tethering my phone. :-D 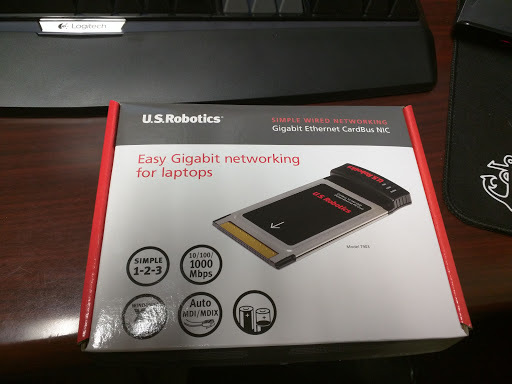