New version of pfsense is out

it's not my video.

hey let us know how you get on with the update.

Do you mean how I will update it or how it is after the update?

Just from that video I can tell it's going to take some getting use to.
The GUI just looks so, modern.

no just your opinion of it is all( when/if you update) the GUI looks great though, it was badly needed, changes like this will only further enterprise adoption of pfsense.

changes like this will only further enterprise adoption of pfsense.

This is very true.

Updating at the moment.
I'll poke around and see how it is.
Updates usually don't take very long.

Alright, so I really like the new GUI.
It will take a bit to get use to but it's really nice.
No issues on the update.
Packages that I had installed were there after the reboot.

Everyone needs a pfSense box as there router.

I'll be honest i know very little about pfsense but have been watching it for awhile, slightly off topic but would this hardware do the job? it's the cheapest pc/server i can find with 2 gb ports

Are you looking for a standalone server that is both affordable and flexible for your small business? The HP ProLiant ML10 v2 Server is a single-socket 4U tower server, delivering excellent value that ...

Actually yea. Would work fine.
Honestly, it could work on anything with at least two NICs.
Hardware Requirements Link
APU1D4 Red Combo Kit is what I am using

I updated my box earlier. The update went smooth and without me needing to do much but sit back and watch. The new look is cool. The only thing that sucks is the NUT plugin to monitor a UPS isn't supported on 2.3 yet, so that was a bit annoying to find when the box rebooted.

I really need to get pfSense setup. I have the hardware to do it but the current router provided by my ISP has the modem built-in and I'll loose wireless if I enable modem mode and since the only other access point I have is 2.4GHz 802.11n and doesn't support 5GHz I can't afford to switch yet.

Looks like this update is going to break igmp proxy for me. I always seem to break something when I update. Oh well, I'll find out tonight I guess.

I'll probably switch my smoothwall over to pfsense this weekend. Looks really nice. Going to feel weird at first, though. I've been using smoothwall for probably a decade or more.

Just updated my VM to the new version. Looks great. No issues as far as I can tell. I do run a very simple config with no packages though.

I was going to say what's wrong with the GUI, but the new one looks nice. 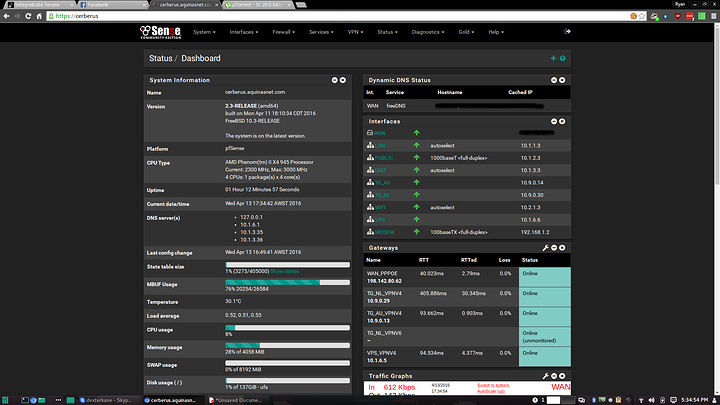 The update did break a bunch of stuff for me, IGMP proxy as I thought as well as bandwidthd and arpwatch aswell as something else that I can't remember.

I'm not sure about IGMP proxy or arpwatch but I know that bandwidthd was said that it isn't going to be in this release.

What DE is that?

Yeah igmp proxy no longer works with VLAN interfaces. So there goes my plex dlna server. Not that I use it.