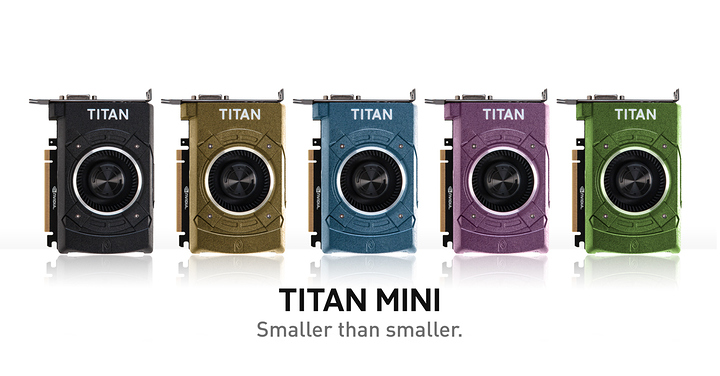 How about a new pink Titan or even a gold one that matches your golden ASUS Z87 Motherboard? One Titan for every theme!
No more need for removing the Hard Drive Cage once you realize the GPU is too long, now introducing the new Titan Mini:
2x the performance
2x the power efficiency
5x the color options
and HALF the size!

Titan Mini isn’t simply smaller – its better in every way. Smaller, yet dramatically faster. More powerful, but remarkably power efficient. With a rugged titanium surface, it’s a one size fits all hardware experience without compromise to performance or color, creating a new generation of GeForce GTX-powered PCs that are smaller than ever before.

April Fools or Not, If Nvidia were to truly release this for the 980 or Titan-X they would of sold a HELL of a lot more cards then they normally do.

See if this were true... OMG NVIDIA PULLED AN APPLE!!! lols

This has got to be an April fools joke by somebody

@offroadslayer88
This article/news has been posted "By Brian Jang on Wed, Apr 01 2015" on geforce.com.
Probably the PR Department from nVidia has initiated this.

still i don't see problem of making them so small by cutting pcb in half and mounting it on back - like 2.5d

some capacitors on the back making it shorter but fatter. cooling it would be problem in some places but i'm sure we'd manage.

With enough time and spare parts i could solder it together like that.

This would go into my micro dream build. I like the small builds.

Well, good luck cooling a 250W card with a "tiny" heatsink like that. Vapor chamber or not, that's not going to work. You would have to dramatically reduce clock speeds and/or have the fan spinning at 7000rpm or something like that. Not to mention that a TitanX probably wouldn't even fit on a significantly smaller PCB. It's obviously an april fools joke, I guess they just want to hammer down that point of "power efficiency" some more.

Obviously it's an April Fools Joke.

That doesn't mean it can't happen in the future with the direction Nvidia is going.

If Vendors can produce a ITX 970 card, i fully expect them being capable of producing a 980 or future TItan ITX card. the 970 is not far off at all compared to the 980, so i call B.S on cooling. If AMD can fit two R9-290x's on one PCB, and Powercolor can keep a R9-295x2 air-cooled. Vendors like MSI, ASUS and Gigabyte who have made ITX cards will be just fine. and will find a way to keep the card cool. the bigger issue that arises is will it make sense? and the answer is probably not. more people are buying GTX 970s and 960s anyways. but it would still be nice to have an ITX 980 too. and i don't believe that it's impossible specifically cause the ITX 970 cards exist.

I was referring to that specific cooler. Of course, board partners will always find a way to make unique cards, but we won't see those in the Titan line-up. A blower-type cooler of that form factor would have significantly reduced surface area, less than half of the standard TitanX cooler from the looks of it. The blower fan takes up quite a bit of space by itself, and you basically cut off the half of the card that is not impeded by that. Not a great idea.

The gigabyte ITX 970 uses an open design cooler, so it already has more surface area than this joke-card. It also has a larger fan and consumes 80+W less. That's a pretty huge difference there. Would a 980 be possible in that formfactor? Sure, if board-partners invest the time and money into it. But with a blower type cooler, on a TitanX? Nah, that's not happening. Keep in mind that some of the cards you listed are either water cooled or (in case of the powercolor card) ridiculous with a card that is a full triple slot design and so heavy that it comes with a support bracket.