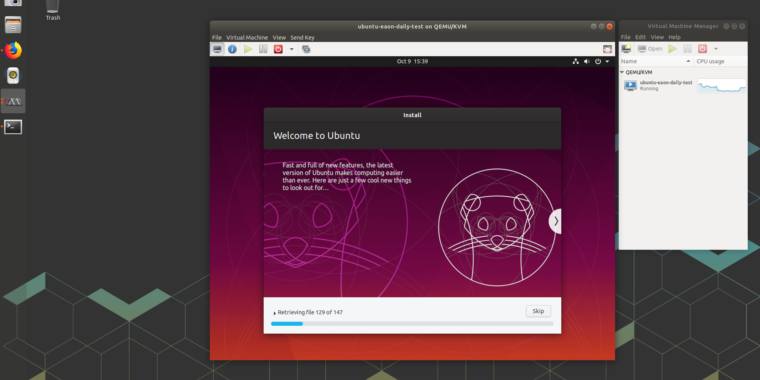 and if one goes Real cutting edge, it seems ZFS might be an option in a daily build of Ubuntu.

I know some people have run this springs to mind:

"Ubuntu." Ok... just a few more. Let's let the last few trickle out the door. Now, for those of you who are still here, and are interested in using some flavor of Ubuntu on ZFS, I've attempted to write a bash script that will automate the process. I'm using Ubuntu Budgie 17.04 Zesty for this. The choice to go this route is because I've repaired a damaged laptop for my wife to use (for docs and everyday stuff), and Ubuntu seems the easiest route to transition her to Linux. The Budgie flavor worked the best and had the most accessible experience, from what I tested on that particular machine. I almost went with elementaryOS, but it was too buggy for me. Anyway, on to the script. It's messy- I'm not good at scripting, but it mostly works. It's written following the instructions posted here. #!/bin/bash echo "WARNING! This script could wipe out all your data, or worse! I am not responsible for your decisions. Carefully enter the ID of the disk YOU WANT TO DESTROY in the next step to ensure no data is accidentally lost. Press Enter to continue." read DISCLAIMER apt install --yes openssh-server net-tools && cat >> /etc/ssh/sshd_config << EOF Port 22 AddressFamily any ListenAddress 0.0.0.0 ListenAddress :: EOF service sshd start ls -la /dev/disk/by-id echo "Enter Disk ID (must match exactly):" read DISKID echo "Disk ID set to $DISKID" while true do read -r -p 'MBR (y/n)?' choice case "$choice" in n|N) break;; y|Y) MBRBOOT=MBR && break;; *) echo 'Response not valid';; esac done while true do read -r -p 'GPT (y/n)?' choice case "$choice" in n|N) break;; y|Y) GPTBOOT=GPT && break;; *) echo 'Response not valid';; esac done echo "Set a name for the ZFS pool:" read RPOOL echo "ZFS pool set to $RPOOL" echo "Set a username for the new system:" read USERNAME echo "Username set to $USERNAME" #echo "Set a password for the new system/user:" #read PASSWORD ifconfig -a echo "Type the name…

But I still haven’t tried it.

I know sgtawesomesauce has done it, and I know a few others have.

Would it be better having it in an installer, like Canonacle seem to want, or is it easy enough to roll oneself that it doesn’t really need it?

@AnotherDev wanna see if this is as hard to install as other ZoL stuff?

Lol maybe one day. Not tonight, though.

Good on Ubuntu for still being the best Linux distro, though.

I’m going to be doing some testing on it soon.

Would it be better having it in an installer, like Canonacle seem to want, or is it easy enough to roll oneself that it doesn’t really need it?

It would be absolutely better to have it on an installer.

Good on Ubuntu for being better than Red Hat at one thing, though.

I’m going to be doing some testing on it soon.

Nice. I have been doing some web server and game dev stuff so I don’t have all my VMs and stuff setup yet.

If Ubuntu are willing to do the legwork to make sure that any breakage between the kernel and ZFS is handled by their devs prior to patches going into the base OS then for me it’s a no brainer.

I have held off on ZoL thus far due to concern with the above.

I have held off on ZoL thus far due to concern with the above.

That’s why I’ve held off on it for root.

Antergos shipped a builtin ZFS with their kernel for their ZFS on Root config. It worked well 99.5% of the time.

Those who don’t follow BSD should check out FreeBSD and BEADM.

The TLDR version is that you can boot from a ZFS clone (which is basically a set of block pointers to an existing snapshot - thus take almost no space until modified) of a ZFS snapshot.

If ubuntu start to support root on ZFS, you can be sure that boot environment support via GRUB surely can’t be far behind.

bectl(8) is the new hotness in FreeBSD though

I was about to install Debian on a machine for some ZoL development but perhaps I’ll give Ubuntu 19.10 a try instead. It’s probably a better idea to use a stable OS on the machine and develop in VMs anyway, that plan was only half baked.

Edit: bugger, the ZFS installer for Ubuntu isn’t available for another 5 days! I installed Debian as originally planned in the meantime.
Edit again: Read TFA, it’s available in the daily builds.

I am not sure how “new” any of this stuff is…
I had it briefly installed on Fedora, and you have to rebuild the driver for every kernel upgrade which takes some time.
I believe this is based off of the zfs from opensolaris, which was at zpool level 28. I have access to Solaris 11 servers and they are at pool version 44 or so?

I would definitely love to run it on linux if there were better support!

It’s version 5000. Development of ZFS continued outside of Oracle after the acquisition, and ZFS on Linux is becoming the central repo for OpenZFS development.

had it briefly installed on Fedora, and you have to rebuild the driver for every kernel upgrade which takes some time.
I believe this

They get around the license incompatibility by not “shipping” the packages together. Ubuntu just says fuck you to the licensing.

Far out. I never I have a freebsd vm and an illumnos vm, and have never noticed the “feature” list above the pool versions in a zpool upgrade -v… That is cool!

Yeah cddl and Fedora… So we have a hinky zfs repo installed for zfs to keep it “separate” and it builds a kernel module via the dkms frame work for every kernel update… Be nice if some 3rd party packager would at least build the module and package, like rpmfusion… yo well, score one for ubuntu!

Iirc, it requires linking against the specific headers, so that’s why you can’t use pre-built modules unless you know the kernel version exactly.