New LG 34UM95-C, DisplayPort doesn't work and other problems. Should I return it?

I could never go back to a single monitor setup... ever.

So I received my new LG widescreen IPS, and saw what real colors look like :) I'm embarrassed to admit, I only knew theoretically, that there's should be a difference, never actually experienced it in real life. I always though, sadly I can't afford a multi-monitor IPS setup, so just don't get into it, coz you be miserable :)
Anyway, at first the IPS was obviously awesome compared to the my old ASUSes. The strange thing happened after 2 days, when I noticed that I "got used" to the IPS as my main monitor and the ASUSes started to look even worse, somehow. I caught myself thinking, how thefuck I could be so blind for all those years - look at those colors, it's like my gf washed them out with soap or something. How didn't I noticed before? lol.

Anyway, the celebration ended on day 2 or 3 don't recall exactly. My setup (the important bits):

The annoying thing that kept happening was the new LG monitor kept showing me OSD messges, even I though was working on in all the time! the pc was not left alone idle, etc... 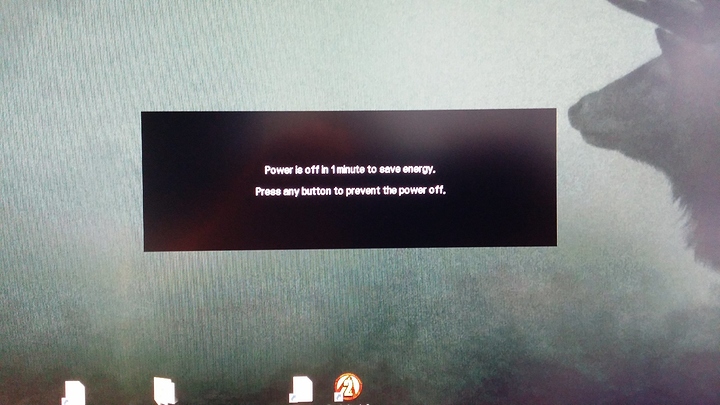 On the 2nd or 3rd day, I restarted my PC for some reason or other and DisplayPort on the new LG bugged out. I don't recall what happende first exactly, but I think this was first - the monitor was not diplaying anything, but it was not saying that there is no input, it was saying some weird (I never heard of this before) shit - Out of Range: 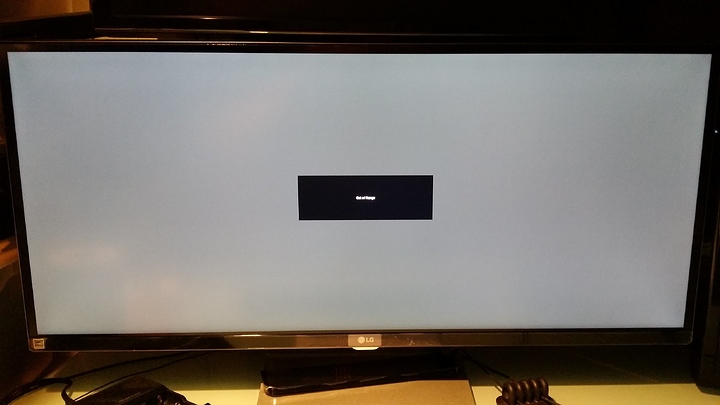 I tried restarting, nothing helped, no range and that's it. I've shut down the pc. Tried the router trick - unplugged the LG monitor from the power for a minute. Started the pc - it was working again, but totally fucked up: 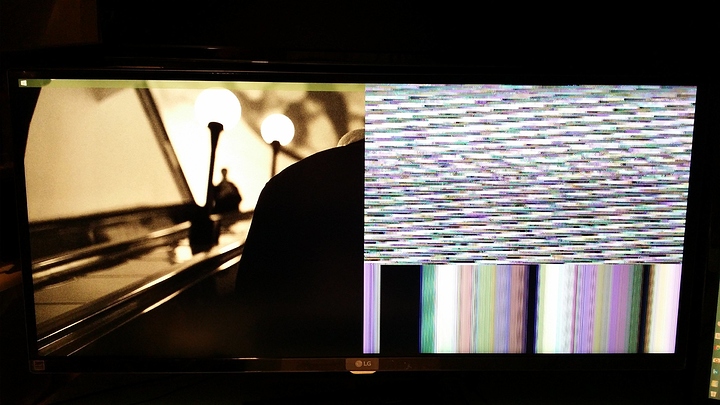 What is garbage on the right side - no idea. I tried again and again - nothing helped - either out of range or that half screen fucked bullshit.

I got mad. Disconnected the DiplayPort and connected the monitor via HDMI, even though it only supports 50 MHz over hdmi. HDMI worked perfectly... well... 50 MHz, but everything was OK again.

Another couple of days passed. That annoying going to power off in 5 minutes... thing was driving me nuts. I looked at the settings, couldn't find anything that would turn that off, well to be honest I didn't look thoroughly, I was busy with other things and wau more worried about bigger problems with it, like DisplayPort and what happened latter:

I was playing Guild Wars 2 and the LG monitor just fucking went and power off into sleep or whatever. In the middle of the fucking game! At this point I only had 2 monitors connected: the new LG and only 1 of the old ASUSes. The LG went poof and sleeping, the ASUS went dark, except weirdly showing only the windows toolbar... what!?
Keyboard and mouse did not work at all. It was like windows wasn't registering any input at all. I have never seen or heard about this kind of shit ever. And I used make a living fixing computers back in college years (oh about 20 years or so ago). I'm quite computer savvy, though not making my living of them no more, so not so up to date with everything lately - no enough time :(

So, I did not want to force shutdown with power button, so the only thing that I could think of - I used Teamviewer to remote shutdown my main rif from my home server. It felt so wrong, somehow :)

I cursed, restarted my main rig, and the LG monitor was completely gone from windows, like it would not be connected at all!. WTF?

The only thing I coulod think at this moment, is switch gpus on the monitors. So I switched the new LG from EVGA GTX 970 to motherboard's inbuilt Intel's hdmi, and the old Asus to the EVGA.
Now it's kinda working for 2 days, without powering down.

The problem is I can't game on it on Intel's GPU. This monitor looks good and completely worthless at the same time.
Not enough that DisplayPort does not work at all, but now it's somehow not able to work properly on my main GPU at all. Which fucked up in some many ways.

Question:
Should have I returned it days ago? Just double checking, if I'm going crazy or what...
Fucking eBay, I never like nor do I buy anything on it. Now I;m gonna get fucked on returned shipping, probably.

On another note: should I get a replacement? I read the reviews and they all say that this monitor is very good, although it's ~1.5 year old model. I like it very much - the colors, the super-wide, but that's just maybe coz it's my first IPS ever.
Or maybe you could recommend something better? Maybe curved (though vesa mount is a must), maybe I should get thunderbolt version for the future? Maybe something better for gaming (gaming is not a priority for me, although this super wide is awesome for gaming), as I will not buy a new expensive GPU just for gaming, 970 is enough for me atm. But still, maybe something with g-sync, freesync. Am I totally wrong thinking, that maybe in the future I could use freesync with nvidia gpu? Something something "mobile mode", I recall seeing some articles. If it's possible them freesync FTW.

I very much was interested in those 4k Korean monitors and almost bought one, but fuck me, I'm getting scared every time I'm reading about the crapshoot lottery. Tha's why I jump on this LG, while watching a korean monitor on ebay, lol. Well, goes to show you... although imagine me paying for return shipping to korea... Also, this shit looks awefull: http://imgur.com/a/67HB3. That's one of the uys from this community just got his korean monitor. Jeeez. This LG at least looks perfect.
So, I don't have GPU for 4K, also 4K on a monitor <39" is shit (thanks Wendell for your videos).

Should I look into something like ASUS ROG gaming IPS? But they're expensive, only 27" and not super wide... Super wide grew on me, even though I was hesitant.

Sorry for such a loooong post.
Thanks in advance for any help.

I'd suggest returning all together over an RMA and get something else because it just sounds like your 970 and the monitor just don't get along. I'm not sure what would be causing this fuckery though, most bizzare.

Also, I would try using a different displayport cable and see if the problem changes at all.

Another point would be to uninstall and reinstall the nvidia drivers. Check to make sure nvidia control panel can see it. If Nvidia can see the panel and the panel can not see the computer (which is why it is powering down), then yeah there is an issue.

If nvidia can not see the panel, then there is an issue that can most likely be fixed.

Thanks for an answers, guys.

@SoulFallen Are you saying, I should not get a replacement but rather completely different make/model, because my card maybe be somewhat incompatible with this particular model?

@Tjj226_Angel yep, I forgot that, I used a DP cable that came with the monitor, but I have another one from Monoprice. Will try with that cable.
About nvidia drivers, I did a clean reinstall, did not help. Maybe I should reinstall windows, although I realy realy don't wanna. It just too long to reinstall and set everything up again the way I like it. And I did that a couple of months ago, iirc.

OK, I'll switch back the LG to the evga card and new DP cable and see what nvidia panel shows. Though, how will I know if monitor sees the computer or not?

At this point I kinda love it and hate it at the same time. I mean it is an expensive monitor (for me at least) and I hate that is giving me trouble straight from the start. It looks defective and feels likes it needs to go back where it came from...

So I reconnected it to my EVGA 970 card with a cable from Monoprice. It actually worked (well, it's been only like half a hour). Here are the screens:

Just after windows boot the monitor in the resolution options. 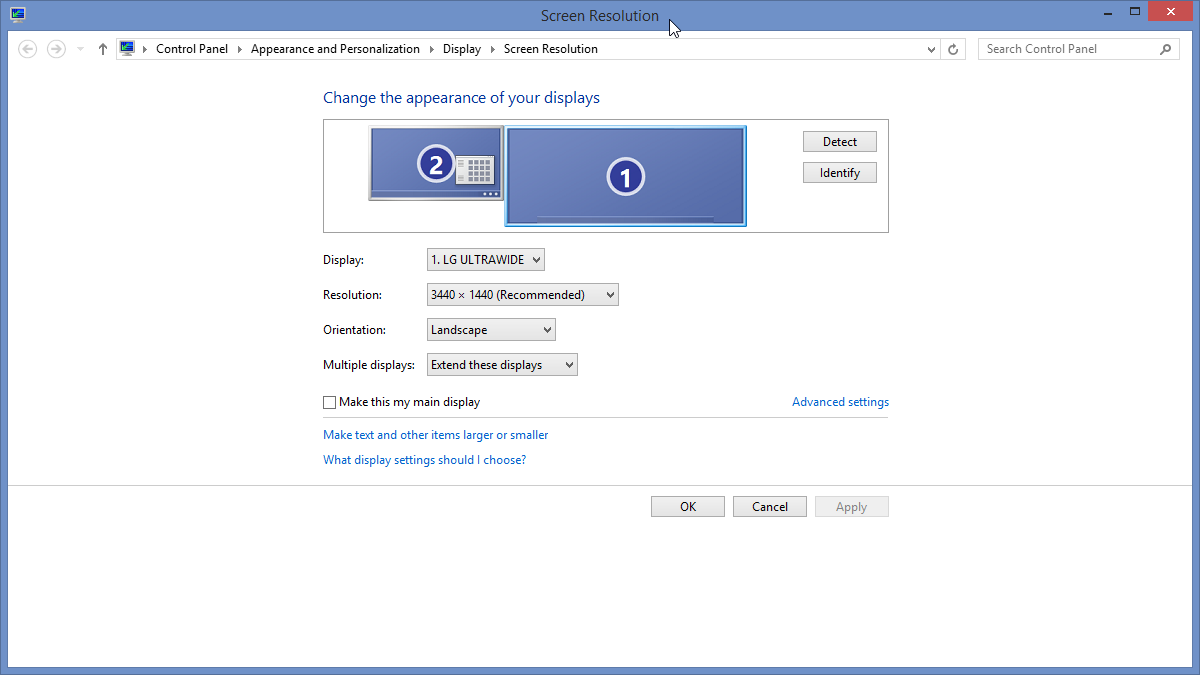 Just after windows boot the monitor in the DisplayFusion. 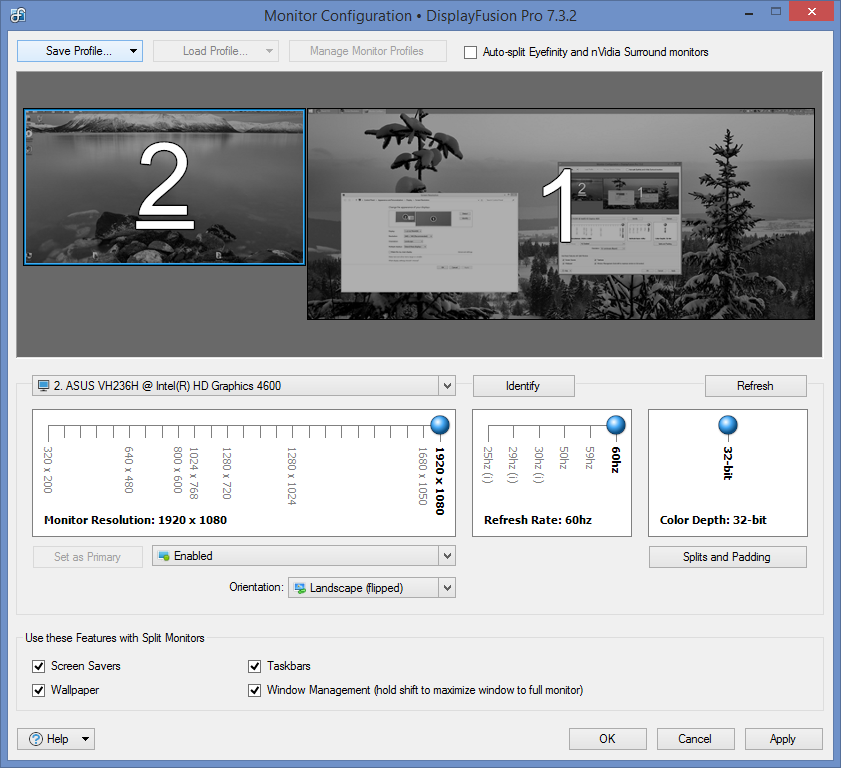 Changed made LG the main monitor and moved Asus into correct position in DisplayFusion. 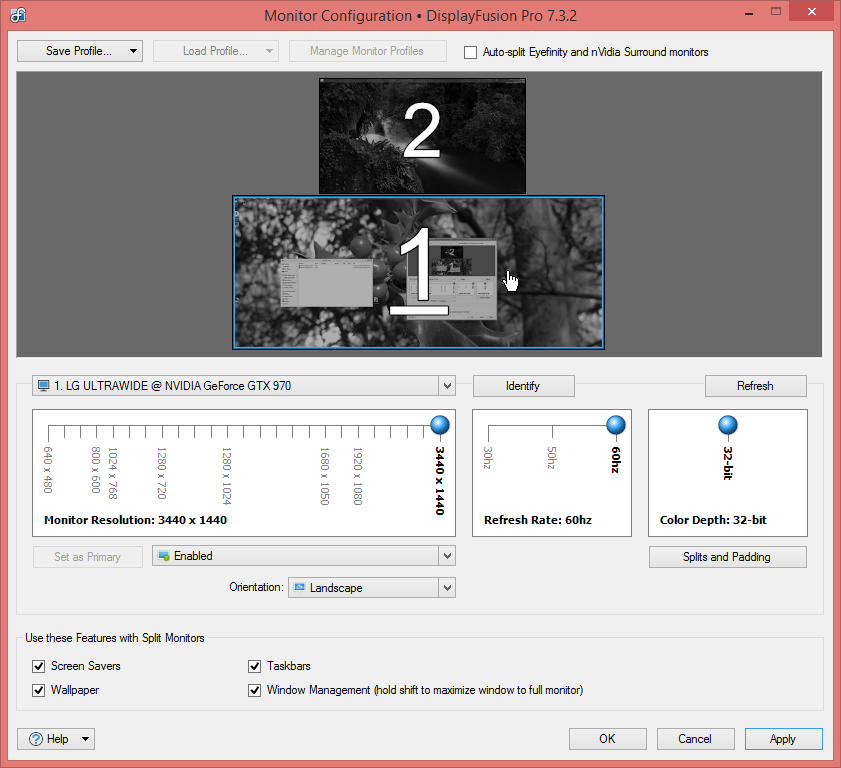 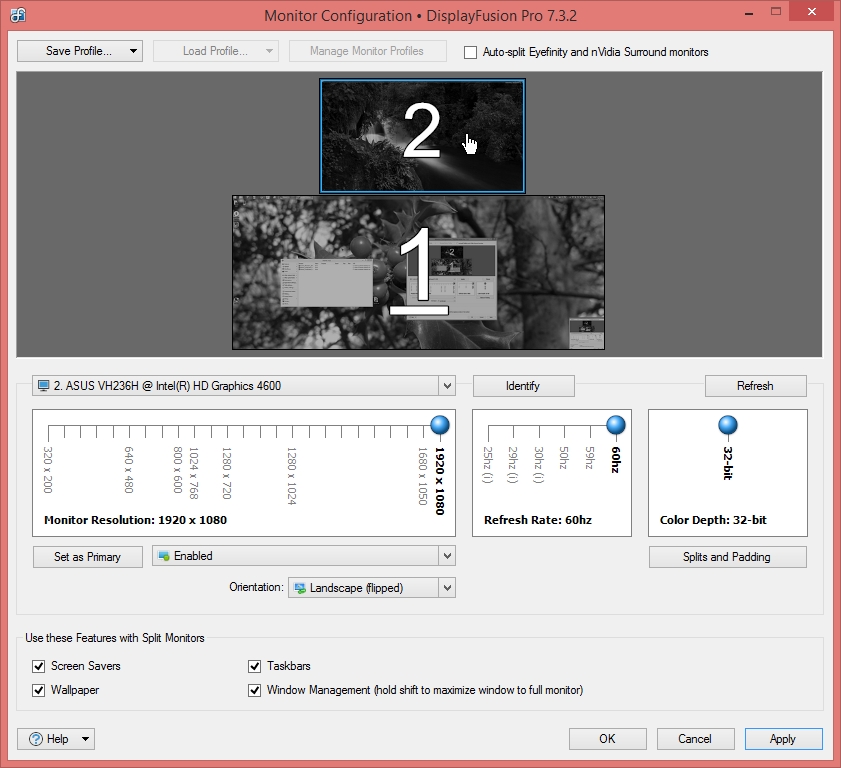 Sorry, I do not remember if I even checked that before, when it did not work with another cable. 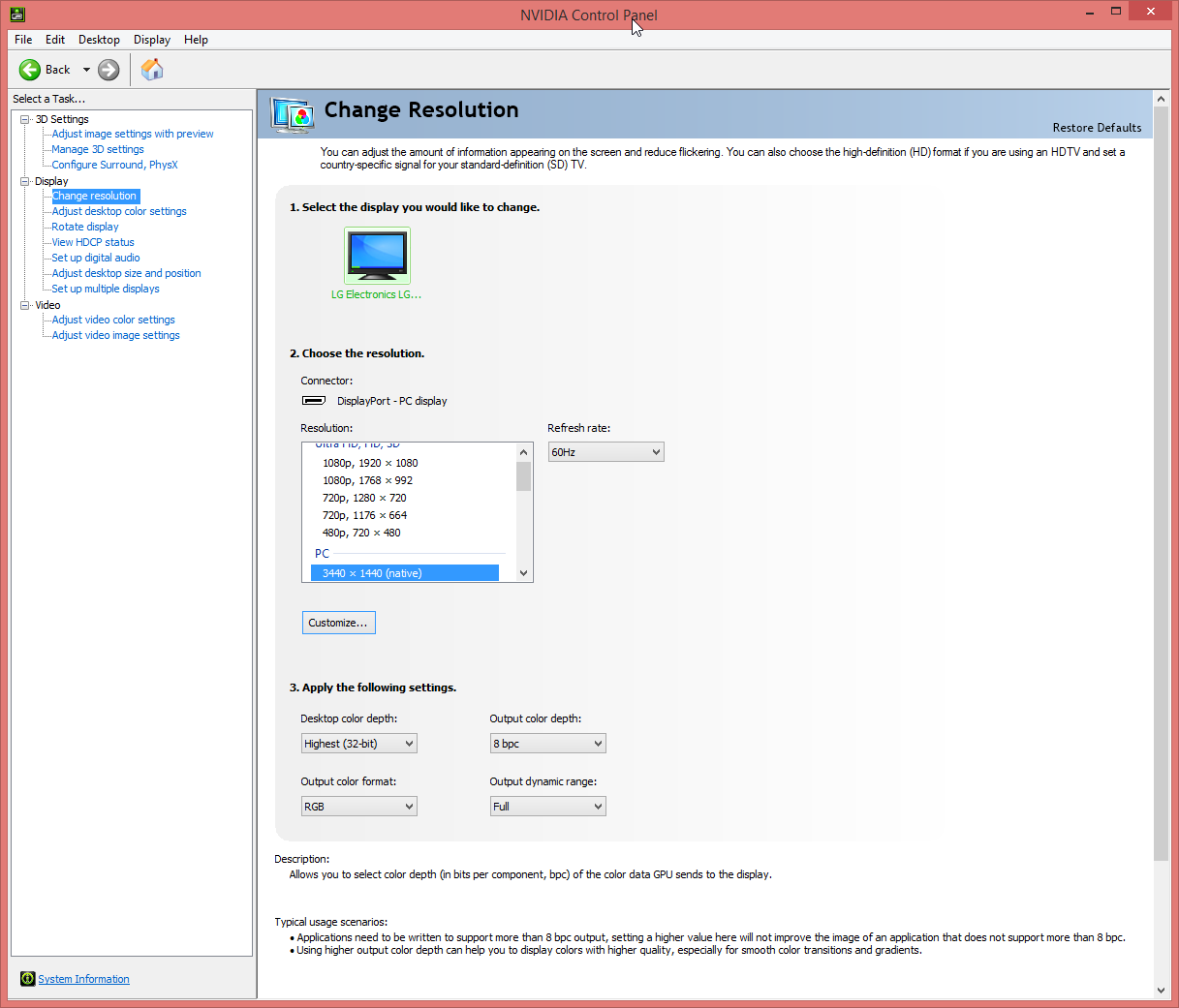 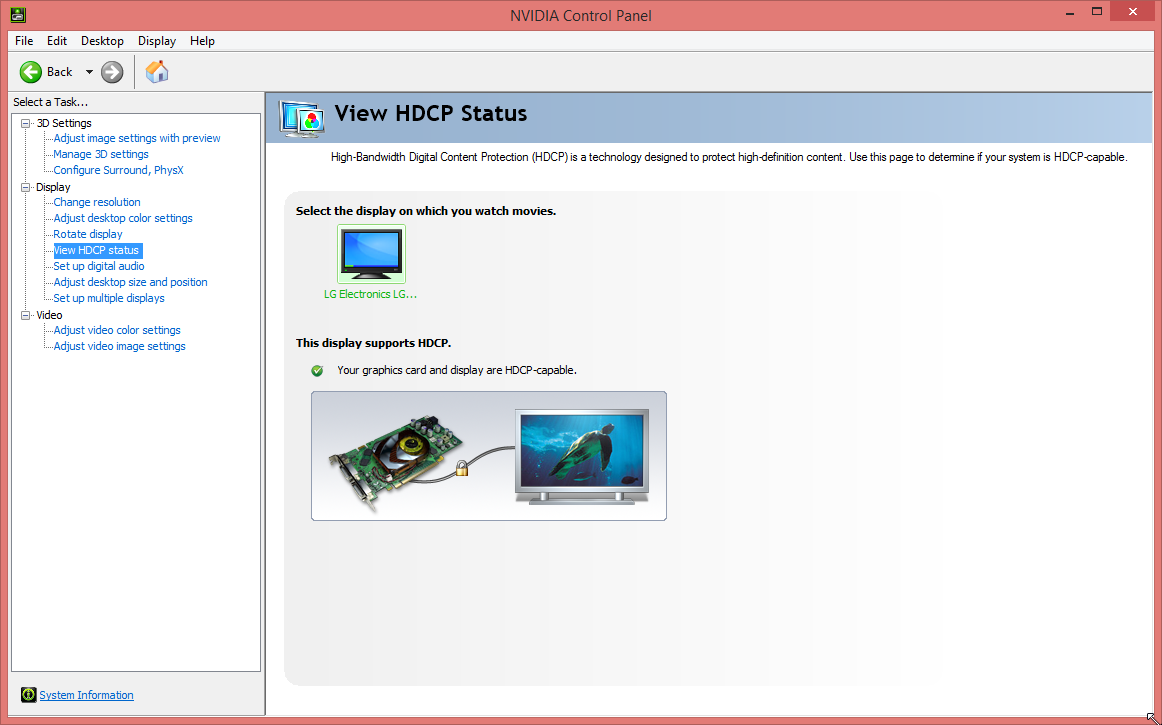 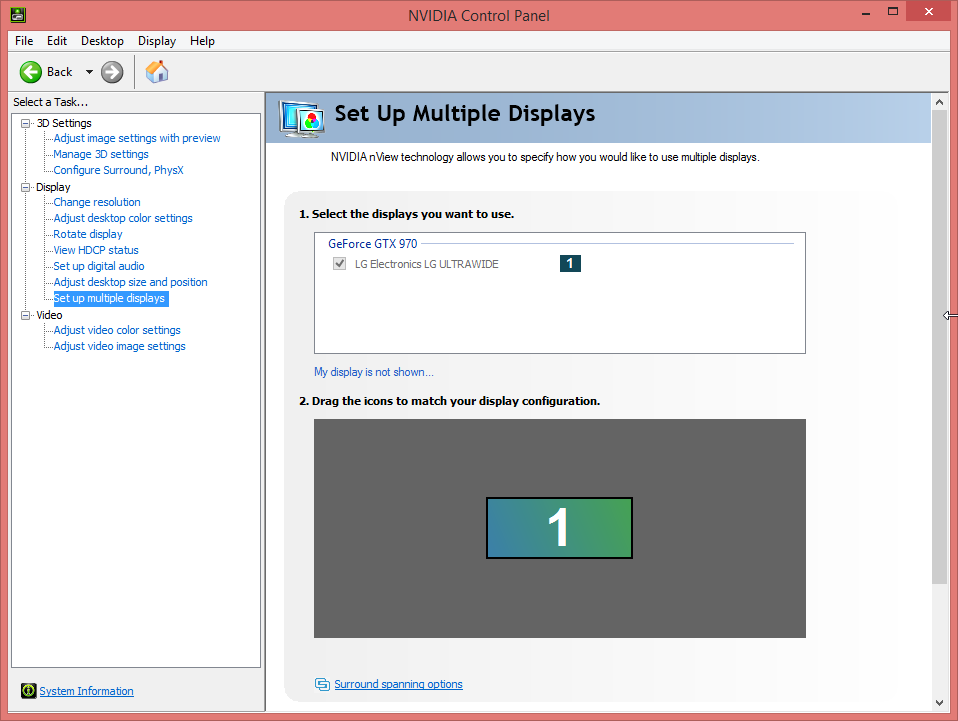 So now I will wait and see how it behaves with that freaking powering off, coz you no do anything.. stuff.
Now I am confused, should i return this thing or not? Please, any advice is welcome.

BTW, I forgot to make a picture during the night, now during the day is too bright. The monitor has some backlight bleeding in the bottom left corner. Is this considered a defect or not? I ask because when it comes to those korean monitors, they said plainly on their ebay page - "backlight bleeding is normal, don't whine about it, coz nobody cares", etc...

Thanks in advance for any help.