I'm looking into replacing my HD 7990 with something new and I would appreciate some opinions.

I'm getting a little sick of the lack of Crossfire support from AMD lately. No new drivers for nearly 90 days and no Crossfire profiles for recent games either. I'm considering going Nvidia but which card(s)?

My initial thought was SLi 970s but I am currently using an Asrock Z87m Extreme4 motherboard and so any SLi setup I have would need to be a blower type fan and I'm having a tough time finding reviews for these, particularly the EVGA SC blower card. Is anyone using a 970 with a blower cooler? How are you finding the noise and temps? If they are tolerable, I could just use them until I have the money for a couple of waterblocks.

The second option is to just forget SLi and go with one GTX 980 with an open air cooler and overclock it as much as I comfortably can.

A single 980 performs about the same as a 7990 in a lot of gaming benchmarks, according to AnandTech http://www.anandtech.com/bench/product/1074?vs=1351

If you want the extra performance of two cards, go ahead. Just think if it's worth the investment.

I'm just a bit concerned about the amount of noise two 970 blower coolers would make. I've been spoiled slightly by having my 7990 on watercooling (still whines though). Would just like to hear some peoples experiences with the 970 blower coolers.

The top card would be running a little bit hotter, but because they mostly exhaust out of the back of the case, I think it won't make much of a difference to the temps, and the resulting fan noise.

I have dual Asus STRIX 970s (open air), and they're pretty damn quiet. And that's only when their fans come on, as most of the time they're completely silent as they don't even turn on unless the temperature is high enough.
For this reason I really wouldn't complicate things and potentially spend more money just to get a louder, hotter blower card (have never heard of heat dissipation being more efficient in a blower card than an open air one, and as far as I've been told the 900 series is no different).
And besides, if you end up using a couple waterblocks anyway, you'd have spent the extra time and cash finding a blower card when you can do the same with an open air one.
I really don't see any real way your motherboard would be considerably obstructing the proper functioning of SLI open air cards, unless of course your CPU is air cooled, in which case I understand, as it would probably raise the temps of your CPU a little.
Dual 980s seems really overkill unless you're playing at a higher framerate and resolution than [email protected], that said, you'd be pretty future-proofed-up. It's like Zavarrr said, think hard if it's worth the investment to you.
With my dual 970s, I haven't yet found a game (1080p) that I haven't been able to max out at a playable framerate, that said I read that the 1440p performance for the 970 is outstanding. Not to mention it's superior price to performance ratio in relation to the other options you listed, even with the whole VRAM debacle (if they had never told me, I would never have noticed, and I doubt I'm alone in that sentiment). If you do decide buy EVGA open air, double check it's the ACX 2.0 coolers, because 1.0 was...attrocious.

My current motherboard is mATX and only has two slots between the x16 and x8 PCIe sockets. I actually purchased two Strix 970s myself and had to send them back because they would not fit, they were sandwiched together and the top card's fans were scraping the backplate of the bottom card.

I can purchase an EVGA SC 970 for the same price as a Strix.

I was sure the space between the PCIe slots was sufficent, but obviously not then.
Frankly, I think your only option if you want SLI is to water cool the cards. I highly doubt blower cards will suit your needs, in my experience they're almost no diferent in size and the comparatively less effective cooling would leave you with a bearly better experience than what you've had with the STRIX, which obviously won't pay by the time you hit the 1 year mark.
If you can get the EVGA 970 for the same price and you're running at [email protected]~90Hz, I would definitely stick to that and spend the money you save from getting 980s on the watercooling parts.
Of course the other solution is like you said in your original post, to use a PCIe extender. This seems like the best way to save money and time, and I've personally never heard about any significant performance losses from using them. Don't take my word for it though.
There is absolutely no reason SLI would not work with riser ribbons (as long as you can bridge the two cards with the SLI bridge) as all it's doing is extending the copper of the PCIe slot.

Why would you buy a gimped card, especailly for SLI?
Either get a 980 SLI or wait for the 390x.

The 970s might not be as advertised but they are still excellent cards and perform well. Plus they are far cheaper than the 980s.

I'm not sure if I made this clear enough but I can not afford 2 980s, they're just too expensive.

If you go with SLI 970s, when DirectX 12 comes around the frame buffer will effectively double, so you won't have to worry about hitting the 3.5GB barrier.

None of these wild speculations have been conformed. AMD could also team up with nvidia but we both know that is never going to happen.

Right now someone on here tested the 970 in SLi and the frame buffer issue got worse. Sorry I forgot you name.

Edit: if you really are over AMD just get a single 980 it performs around the same as the 7990 and no SLi. By the way SLi can be every bit as troublesome as Crossfire for the noises on forums people make. Although I do not run nvidia so I cannot say myself.

970s and SLi are jot worth getting just on the off chance that a future operating system you may not like could have a feature that could help partly eleviates a hard ware problem that cannot be fixed and only gets worse in SLi as it is today.

As far as I can tell SLI is a few years behind crossfire. I don't know how crossfire is with bridges though, I'm using 290's.

The SLI 970 tests I've seen have all been on 1440p or 4k. I own two EVGA 970 SSC's which I purchased before the whole 3.5 VRAM was brought to light, and I only game at 1080p. I have had NO issue running all my games maxed out with all the filters turned on, and only three games actually reach over 3.5gigs and thats Evolve, Dying Light, and Shadows of Mordor and even when the VRAM is shown to hit 3.6 on the graph, I've not had any performance dips of ANY kind. The 970s in SLI is a poor 1440p or above setup because of the second 512mb pool, this is VERY true and the frame time issues are VERY REAL. But if you're gaming on 1080p and using one or two of these things, you won't run into any issue with the current games. They are still awesome cards for the money, they run super cool and barely make a sound. I looked at so many benchmarks and tests to see if I should fully refund my 970s and grab 980s but nothing at 1080p gave me an inch of reason to spend another $400 or so switching to 980 SLI. IF indeed you're only gonna game at 1080, don't feel bad about 970s, as I said I've had nothing but a stellar experience with them and no performance issues. If you can WAIT however for AMD's new line then you may in fact want to wait for that as you'll have no issue if you ever move up to 1400p and I'm sure their cards won't be as pricey as dual 980 prices on their step down card. 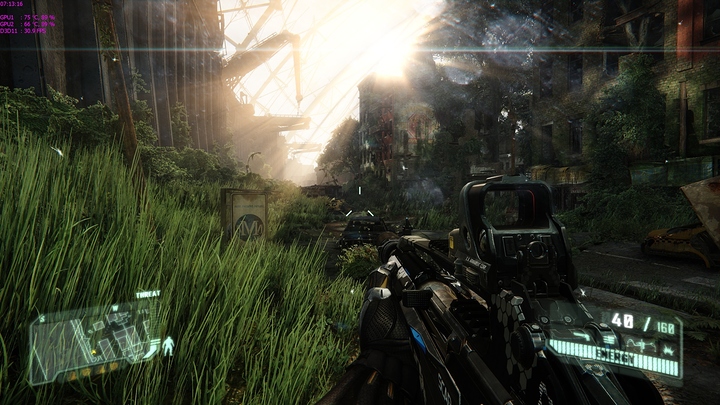 I've decided to wait it out a bit longer. Nvidia just showed off their Titan X GM200 so hopefully there will be cut down versions coming soon (980Ti) and the 390x was rumoured to be powering AMD's VR demos so we could also be seeing the 300 series soon. I think I will ditch multi GPU setups for now and just go with a single GPU. Thanks everyone for your inputs. 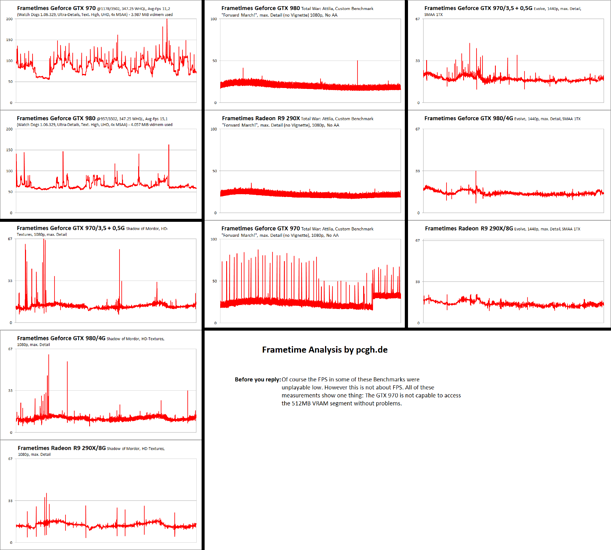 doesn't show much... i don't see meaningful impact... while yes, no one should buy their 970 gpu as they lied, and false-advertised.

There are just as many frame time tests showing it perform perfectly fine at 1080p and start taking a shit in 1440p once it dips into the 512 pool. If it dips into the 512 pool, it has issues, it sucks and it shows in tests, thats a known fact. Its a decent card for 1080p and from my experience actually PLAYING GAMES with 2 in SLI I have yet to run into an issue with my games maxed out, mostly because noine of them use more than 3gigs of VRAM other than the ones I listed. Being Shadow of Mordor, Evolve, and Dying Light and even with those three titles I saw no crazy performance issues. I wouldn't go out and buy two of them for SLI any time soon, but for a single card solution for $330 on a 1080p machine there's nothing wrong with it, its still a capable card, albeit it is GIMPED when compared to fully functional 4gb cards. I would take a 970 over a 290x just cuz of how it [email protected] and stays so much more cool. If I had no card and was about to purchase, I wouldn't buy either, I'd either go with a single 980 or wait for the 300 series. I'm not saying the 970 is without issues, and some of the tests we see have ppl cranking all the fiulters all the way up and you're gonina get unplayable frames/times with any card in this range at that point. What I'm saying is its a capable card from my experience at 1080p and I have had NO issues with it, regardless of how many graphs and tests you throw up. Everyones real life gaming experiences thjat I've spoken with and my own personal experiences show the 970 is still a good card for its price range @1080p.

If you have cash right now then just go buy the xfx 295x2 for $600 on newegg. You play every game at ultra settings.