I have a MSI Z87I-gaming mainboard at home waiting to be used for my second rig based on mini-ITX. I'm eagerly searching the web for ideal cases, two of them are currently on my most wanted list: the Fractal Design Node 304 and the newish Corsair Graphite 380T. These two seem to be the perfect "body" for my new nice and tiny gaming rig.

Any experiences with these cases? Any alternatives you would recommend (I'm open for anything)? The CPU will certainly be an INTEL Core I7-4790K, 16 GB-Ram DDR3-2400 Kingston Savage, CPU-Cooler is a tie between the NZXT Kraken X31, Corsair H80I/H75. GPU is a hard one, since Gigabyte has just released the GTX 970 ITX-Edition.

I believe Wendell did a video with the Node 304 in it? (Nasferatu or something?)

I own a Node 605, and while I have issues with the 605's internal layout, I have no qualms about the build quality. The 304 looks like it's built with the same types of materials, but with a more intelligent layout.

Yeah, you're right, Tek S. made a video with the Node 304 in it. Like I said, this case is on top of my list, because you are able to build a rig ready to rock and roll. I like the down-to-earth-style of the case, the quality shoud be top notch as well.

I built my second Node 304 ITX rig just today and would heartily recommend the case. If you pick a powersupply with a maximum length of 160mm (preferably 150 if modular) then you can fit a normal length GTX 970 (or pretty much whatever) without issues.

I picked an ASUS Z97I-PLUS motherboard and could fit a CM Hyper 212 EVO cooler thanks to the position of the CPU socket, but with the motherboard you have a radiator would be a good choice for an i7. I'm not too into water coolers but it would be worthwhile trying to find one with a 140mm radiator for the rear exhaust of the Node 304. The larger area should make room for a slightly lower fan speed.

I've already contacted Fractal Design's technical support concerning the use of 140 mm radiators on the rear. The guy told me, that a 140 mm radiator won't fit, especially the Kraken X41 I specifically asked for using in that case.

Good point mentioning the length of the PSU. I've forgotten about that in me previous post. I'd also like to grab a modular power supply, a fully modular one if possible. The Strider S Gold 650W from Silverstone is on my radar right now - it is fully modular and has the size of 150x86x140mm. With that I'd also grab the Silverstone SST-PP05 flat flexible short cable set. Building a great rig with these components would be classic. With that in mind, a "larger" GTX 970 could be a golden opportunity, my favs here are next to the tiny and nice little GTX 970 from Gigabyte's ITX-edition the GTX 970 Gaming from MSI or the EVGA 970 FTW.

Yep - Node 304 Owner.  The 140mm rads are a VERY tight fit, and some will push against the GPU so much that the GPU no longer runs.  I would stick to 120mm radiators if you want to have an AIO.

If you do go with the ITX flavor of the GTX 970, then the Node 304 becomes a bit spacey.  Consider an Elite 110 with such a small GPU.  The main selling point of the Node 304 is the ability to fit many ATX power supplies and long GPUs.

There is One Case I can think of that i think you will like but its Sold out EVERYWHERE.

The Xigmatek Nebula its a Cube Case and will be able to fit those Mini-ITX cards only which i guess its only flaw. 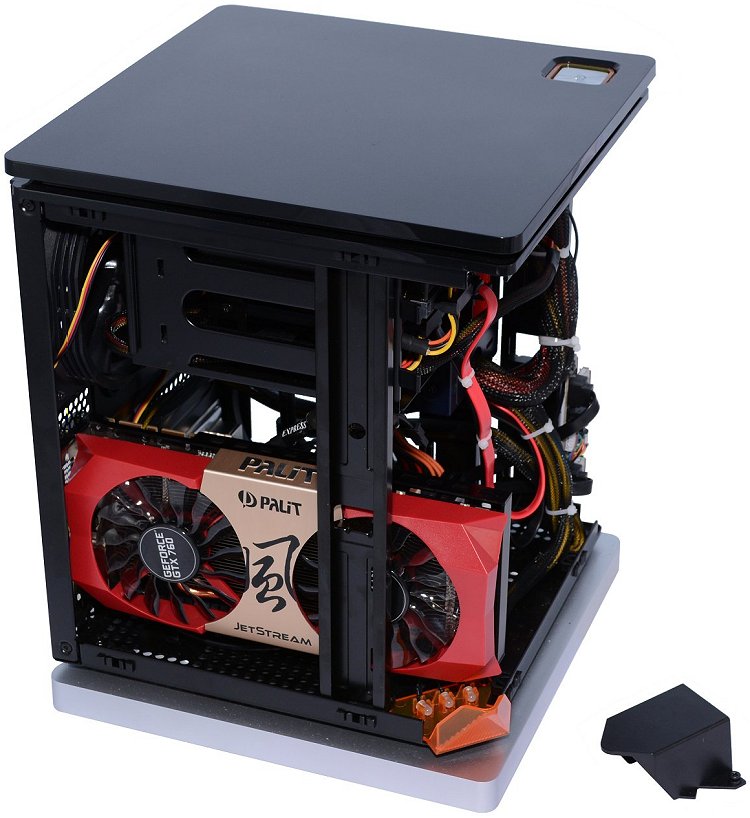 I saw this one and I was amazed by the layout and actually considering this for my next build, but I might go for the Aquila for micro-ATX compatibility. This is good for a small NAS cabinet, although you might need to do a bit of modding.

No love for the Corsair Graphite 380T? Dat sexy handle tho.

Well, Xigmatek cases are easy to get here in Austria, Europe. My preferred seller where I buy most of my hardware stuff can get nearly any of them in about a couple of days. The Nebula looks nice too, also the Corsair 250D. Corsair cases are most of the time top notch - my current AMD-rig uses the Graphite 600t as home and it's very nice. The build-in of the components was absolutely hassle free.

That's why I also like the 380T, which is the toughest opponent for the Node 304 in my case. I think the upcoming week I'm going to make a decision. Can't wait to start the project!

Most of the Mini-ITX cases do not have a 5,25 drive bay, so built in DVD-/Blue Ray Rom drives are pretty much obsolete. Do I have any major disadvantages using a USB-drive (external) instead? For example when installing OS and/or software.

The only real disadvantage is that the read/write times are typically slower. But unless you are constantly burning or reading CDs/DVDs/Blu Ray discs I think it wouldn't matter much. I use an external CD/DVD drive from time to time and nothing bad has ever come about because of it.

No, I'd only take the external drive for installing windows, security suites and games. So the top of the list is a head to head race between the Fractal Design Node 304, Corsair Graphite 380T and the Corsair Obsidian 250D. Let's see...

I absolutely love the looks of this one:

I've never done an ITX build for myself yet, but this things filled with some capable hardware would be pretty cool.

BitFenix Prodigy maybe? I have one in white and I love it. Excellent quality and easy of use for the price. Slightly large for an ITX case however.

Get Jonsbo's cases. They are very good for the quality and etc. They usually got their case rebranded by Rosewill in USA and one other brand in Europe while uses its own name in Asia.

I don't know how well a liquid cooler would fit in though.

I was looking into getting the EVGA Hadron for my itx build, I like the slim psu and hope more manufacturers use it with their cases.